Photos here by landlord Steve Knowles who also sings a capella in Italian and English at the evenings (including that heart-rending one from the The Godfather, Speak softly, love) Is there nothing the man can't do? 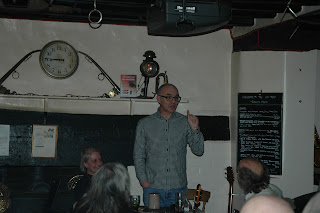 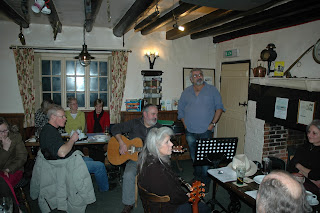 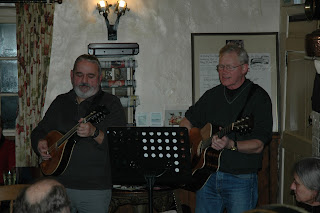 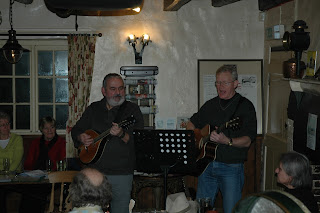 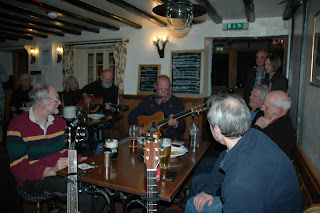 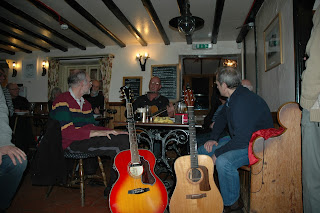 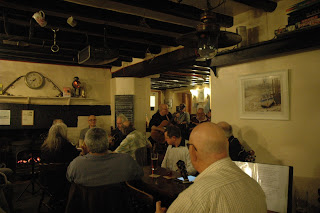 Posted by Gareth Calway at 7:42 am No comments: 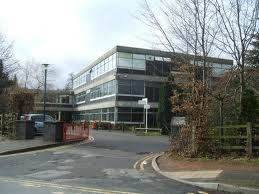 I called this ‘Last Tango In Droitwich’ in my diary because, after a teaching career that I finally gave up to be a full time writer and performer, I’m always telling myself it’s the last one. Just like the last five or six school visits I’ve done. I've had more comebacks than Frank Sinatra.
But this was, quite simply, the most enjoyable I’ve ever done. So maybe I really should stop now, at the top!
The day was four one hour sessions – with a twenty minute break after two hours - in the (excellent) library. The two middle hours were with Year 12. The outer two hours were with two top set English GCSE groups. The brief was to explain to Sixth Formers the link between poetic form and meaning – why write an ode or a villanelle or a sonnet for instance (or free verse for that matter, that’s a form too) ? ie form is a labour (of love) what does it give you? - and to encourage (extremely bright) Year 11s to sign up for English Literature in the Sixth Form.
My first decision was not to ‘teach’ – they get excellent teaching all day from people who know them and the courses much better than I - but to talk as a practitioner. Fortunately, my first book of poems Coming Home – published in 1991 when I had a shock of hair (and that biog pic is more and more of a shock these days) - is a compendium of poetic forms employed for a definite and evolving purpose. Coming Homee aims, ambitiously, to tells the story of evolution, historical development and then spiritual aspiration through a range of increasingly ‘conscious’ forms, including ‘free’ and modernist and minimalist ones. The final section is the Persian ghazal, a combination of intense freedom - lyrical, soaring emotion - with the tightest metre and rhyme imaginable. It is said to be the source of the Italian sonnet, which westernises some of its exotic Eastern/timeless features. On the way to this section, I explore a ‘formless’ form for gas, a villanelle for stone, terza rima for metal, free verse for vegetation, a rap for worm, a Petrarchan sonnet for human, a ballad for mediaeval, a dramatic monologue for Victorian etc. Re-encountering the book as I planned the ‘masterclass’ I found myself both grateful for the coherent compendium of verse forms and rather impressed by my young self’s ardour, and (as Ted Hughes wrote of them) the poems’ ‘tenacity, wholesomeness and strength.’ All of this came from the inspiration: a vision of ‘why we are here’ that accepted evolution but saw no reason to doubt a greater spiritual purpose in it.
My students for the day were awake to all this. By chance, there was a fly chart from a previous lesson announcing that three quarters of Americans don’t believe in Evolution. We wondered if ‘Creationism’ could be quite that widespread even in the Bible Belt of the USA but nevertheless the sophistication with which Year 11 students approached the philosophy in my introductory ‘Invocation’ where evolution is set within a framework of human potential for the divine was staggering. We hear a lot about how ‘kids today’ don’t read enough, are lost in special effects cinema and text speak etc etc. Well, these weren’t. The way they debated whether there was anything inherently masculine in the all flash and no substance persona I used to ‘become’ Halley’s Comet was confident, articulate and masterly. I have never been so sorry to see a class go. I think by the end of the day we might have split the atom and also sketched out the poetic music for a mould-breaking spoken word Sergeant Pepper.
The Sixth Form applied themselves to the link between form and meaning with increasing insight and it was clear to both the teacher Mr Izod (or Fat Bloke as he permitted me to call him when I said was it all right to call him ‘David’) and myself that all they needed to do was trust their instincts for how form created meaning and then merely have the confidence to articulate this in the critical language their teachers have taught them. I was sorry not to get on to the Chorus of Greek Philosophers I had planned in which the whole group could have taken part but I did enjoy the way a boy and a girl performed the ‘male’ and ‘female’ voices of my Song of the Wedding Rings. They said there was no danger of a personal romance and marriage emerging from their dialogue but poetry is a kind of spell so you never know. That said, I originally wrote that poem for a wedding service – which another married couple also used – and both marriages ended in divorce so maybe not. More immediately, the students started to see what all the precision engineering that goes into crafting words into terza rima gives a poet that merely – and much more easily - writing lines of dialogue doesn’t. The fact that the sections allocated to ‘He’ and ‘She’ rhymed internally but (unlike Romeo and Juliet) never with each other was noticed and understood. The fact that a poet has to cut out all the dross verbiage and really concentrate the meaning into that tight –jewel-like– form. The fact that there is forward progression (unlike a villanelle) but that progress is slow, as in the grinding away of ego towards real marriage etc etc. All very like working with gold.

As was the whole day, in fact. Thank you Droitwich. My Last Tango. Until the next one?

See also: http://garethcalway.blogspot.co.uk/p/poem-of-month.html Stone
Posted by Gareth Calway at 10:59 am No comments: