Stand Up Poet at Elsing Oct 26 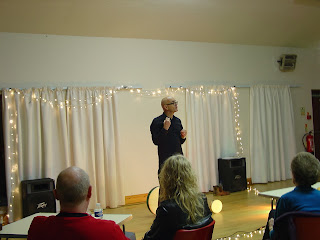 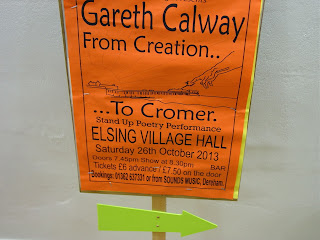 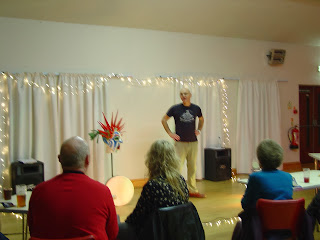 Review by Tim Chipping published in The Dereham Times

From Creation To Cromer by Gareth Calway.

The pics shows the poet shortly after the Himalayan-recorded tantric horn making the OM at the start of 'Creation' - 'Creation' is a one-man theatre sequence exploring the first six days of Creation in which (among other things) I orbit like a comet, wriggle like a worm and howl like a wolf on my way to the playing fields of Eden for a sequence of football and teaching poems, all nearer hell and purgatory than heaven but with glimpses of it;
one of Tim's Biblical signs
and finally the poet in media res The Clash Between Boudicca and Rome, an exhortation that Norwich gets a statue of Norfolk's ancient queen not just another 2000 years celebrating the Roman version. Leading into an odyssey of stand up poems from Celtic Norfolk through West Norfolk to Yarmouth, the North Sea - that seaside meeting of sandcastle holiday impermanence and the eternal fathomless ocean - and finally Cromer. One man theatre/stand up poet/one man theatre/ stand up poet. It seems to work.

Particularly prized was the audience participation OM with which the show ended, and over which I pitched the final couplet of the evening. It put the Om into Home.


AS FEATURED ON FOUR COUNTIES RADIO SUE MARCHANT BIG NIGHT IN SUNDAY OCT 20 33minutes in... (Steve Hackett was my warm up man and the show is rooted in Genesis...what can it all mean?)

October 26 is the day once believed to be the first of Creation (Oct 26 4004, to be precise, and they had calendars which worked it all out.) So, like Creation, I'm going to start from there and see where it goes.

I’ll be ranging through my seven published books of poetry – by heart and off the page – including the ballads and stories that have proved popular around the folk clubs. A chance to hear how the lyrical moments fit together into some kind of overall vision. And a no-repeat guarantee: Elsing has heard none of these – and nothing like these – before!

FROM CREATION TO CROMER

PRESS RELEASE
FROM CREATION TO CROMER

There are no lonely, wandering daffodils or dust-dry crossword puzzles here, only insightful, impassioned, witty and poignant writing which draws on our collective experiences of living in the modern age. Of Gareth Calway, Ted Hughes (Poet Laureate until his death in 1998) said, "wholesome, strong and to my tastes, simple in the best way, the real way"; The Guardian thought his ‘Tales Out Of School’ ‘very funny...a metaphor for a country in decline’; our very own EDP (reviewing his Norfolk and Norwich festival show House on the River) proclaimed Gareth “an eloquent poet,” The Scotsman described his performance of King Arthur’s legend at the Edinburgh Fringe as “slam poetry with a patriotic twist..... packed full of boyhood glee’ while Three Weeks (the Fringe festival review) called his punk-rock take on Norfolk’s warrior queen Boudicca ‘impassioned ruthless and funny’.
Of From Creation to Cromer Gareth says, ‘This is my first one man theatre/poetry show since I took Arthur and Boudicca to the Edinburgh fringe in 2011 and I’m really excited about premiering it at Elsing Village Hall, where Tom and Harry (Gareth’s play about Anne Boleyn and then men in her life) played to a full and appreciative house last May.
http://www.derehamtimes.co.uk/news/review_lots_of_history_as_cast_serves_up_a_real_treat_in_the_village_hall_1_2228196)
After a series of successful and enjoyable collaborations with actors and musicians across Norfolk and Cambridgeshire, and many well-received individual poems performed at Norfolk folk clubs like The Wolf, Gin Trap Folk, Meet In The Hedge and Folkspot Radio, I want to bring all the music and theatre of words back home to the single poet on stage, acting out his stories - and fitting the heightened moments each individual poem gives into an overall vision.’
‘October 26 4004 was once believed to be the first day of Creation. You could say ‘From Creation to Cromer’ sets the passing fairs of time represented by the sea front against the metaphorical eternity of the North Sea. But not always as seriously as that sounds!
Tickets are on sale now priced £6 advance from The Old Chapel, Elsing, Tel. 01362 637331 or from Sounds Music, Dereham. Entry will be £7.50 on the door. The Mermaid Inn will provide a bar which will be open from 7.45pm when the doors open. Performance commences at 8.30pm. 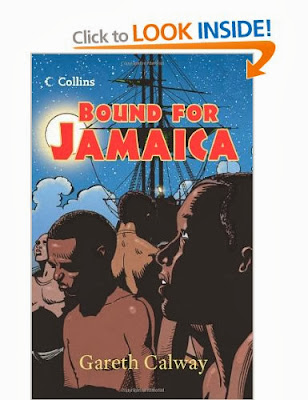 I will be reading Bound For Jamaica – my children’s story about the Atlantic Slave Trade (published by Collins Education) – as a live broadcast on Folkspot Radio from Great Massingham Social Club this Sunday October 13 at 7.15 pm. (15 minutes). I hope this reading may be of interest.

This is the launch of a regular storytime/spoken word slot from me on Folkspot radio which will be broadcast weekly from 7.15 to 7.30 pm. The subject of this week’s story has been chosen to coincide with Norfolk Black History month.

(The next few weeks of broadcast thereafter will serialise a murder mystery set at UEA in the Hendrix late 60s called ‘Who Killed Lucy?’)