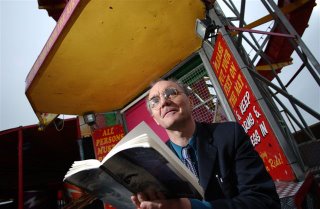 FROM THE BRISTOL CITY COUNCIL WEBSITE; WHAT'S ON JULY 2006
Exile In His Own Country

Gareth Calway takes poetry to places it doesn't always get to: from Hindi Picture to the boardroom at Ashton Gate Stadium; from punk history to world jazz rap; from the pulpit of the Lord Mayor's Chapel to the streets of Wells-next-the-Sea. Calway performs his new work "Exile in His Own Country" at the Lord Mayor's Chapel.

Booking: Tickets available from the Verger at the venue 0117 929 4350 or call 01485 571828
CAR PARKING - IF YOU DON'T KNOW THE AREA AND ALL ITS LITTLE CAR PARK SECRETS, THE BEST OPTION IS PROBABLY THE MULTI STOREY CAR PARK AT THE TOP OF PARK STREET (ON THE TRIANGLE)
TICKETS FOR THE EVENT CAN BE RESERVED AND PICKED UP ON THE DOOR: YOU CAN DO THIS ON EITHER NUMBER.
Posted by Gareth Calway at 5:33 pm No comments:

Ronaldo goes into a burger bar and asks for two whoppas. The sales assistant responds, "You’re not fat - and you’ve still got it..."

Well the mums got the joke anyway!

I met two splendid young poets, appropriately called Sophie and Hannah, and Jamie who turned up wearing a Norwich City baseball hat looking very nervous and ended the day with the biggest grin I've seen on a Norwich fan since the Sunday they all celebrated their last promotion to the Premiership.

Three organisers - from at least two organisations, I lost count - also turned up at various stages of the proceedings and John Thompson, an extremely helpful librarian - and keen comic poet in his own right - popped in several times, beyond the call of duty, with some much appreciated assistance, and colourful World Cup stickers. (He also put in an order for my latest book to join the library stock.)

The mums read a copy of Exile while waiting and laughed a good deal. Special thanks to Jamie's mum who helped the (initially almost silent!) group make a genuine racket during the final call and response activity, with Jamie on rattle and Sophie/Hannah on big drum, as we composed an England tribal "Everywhere We Go" chant for the terraces. "We are the boys in blue and white, Love to watch tv all night, We 'ate Argentina, Crespo is a plonker..."

Other tasks included writing the Imaginary Madrid fantasy news report in which England (or in one case Spain!) win the World Cup Final and of course making that tableau of poor old Tommy Doherty's goal on the front cover of "Sheer Paltry" before writing captions and then poems in role as one of the characters. (The fed up steward was as usual a great favourite).

Then we had squash and biscuits provided by Creative Arts East. The ages today were 9-11 and two differences from the secondary age group I noticed are (1) I have to go a bit slower at first as the kids find their confidence and comfort zone and (2) Their imaginary world is extraordinarily bright and vivid and, with a bit of care and guidance, activities like these can open up a rich vein of intelligence that will hopefully never leave them. Sadly I don’t think they get this sort of self-discovery from cramming for SATS!
Posted by Gareth Calway at 6:56 am No comments:

Exile In His Own Country, by Gareth Calway

AUTHOR Gareth Calway returned to school at Abersychan Secondary School in May, 35 years late but with all his homework done.

He was there to launch his seventh book of poetry, Exile In His Own Country (Bluechrome, £7.99), playing truant from his job as a teacher in Norfolk to revisit the school that provides the setting and themes of a whole section of his book, Marked For Life.

The new book adds to the literature of the Eastern valley and is the first to combine a sequence under the title Torfaen Monologues, wry and bitter-sweet accounts of teenage valleys life in the 70s. It also records his lifelong love for Bristol City Football Club, for which he's official poet laureate.
Posted by Gareth Calway at 6:54 am No comments:

June Poem Of The Month

Football is art’s reflection of oneness
In a world of divisions; of beauty’s truth
Leaping muscle-bound fouls; the dreams of youth
Without its injured ordinariness
Or age’s silting of its genius;
The Best without its thickening uncouth
Slurred self-disgrace or bruising disproof
By yobs in boots; the angel dance of studs:

-Like Pele’s pass, to gift a certain goal
He’d made his own, to some more mortal bloke
He’d knew without a call or look was there;
-Or Maradonna’s second that turned a whole
Defence, a childhood’s poverties, to air
More light than hand of God or head of coke.


Note: For some reason, my mind is turning to football - and the World Cup - this June. This poem is from the Tribes section of "Exile In His Own Country" and celebrates the Pele-eyed vision of the whole event. It's a more serious version of my football fantasy piece, "Imaginary Madrid" in which Bristol City win the European Cup 4-0 over "Real" Madrid and Calway gets the third. I really do think that football can be "art's reflection of oneness in a world of divisions." Really. Of course, if it's England's World Cup, the oneness will be that much easier to feel, but it's there anyway.
Posted by Gareth Calway at 6:16 pm No comments:

This article is reproduced courtesy of TES Cymru and Nerys Lloyd-Pierce and was published on Friday May 26.

FOOTBALL IS SHEER POETRY FOR BOYS

Returning to Abersychan comprehensive school after an absence of 35 years conjures up a string of memories for prodigal poet, Gareth Calway.

He recalls the anxiety of his first day, aged 12, newly arrived from Somerset, wearing the hideous brown uniform that was the order of the day then; the furious red pen of the English teacher, "Ma Bart", slashing through his homework.

Yet despite her uncompromising attitude to marking schoolbooks, the classroom dragon inadvertently encouraged him to write.

"She ran an Eisteddfod poetry prize, which I entered aged 15. The theme was Spring, but I thought that was boring, so I based my poem on a Beatles' lyric. With the arrogance of youth, I was convinced that I¹d win."

He didn't, having failed to stick to the brief. But the joy of self-expression through verse remained.

A lifelong Bristol City fan, and the club's official poet laureate, Calway, 50, uses football metaphors and his book of football poems, "Sheer Paltry", as a tool to pass on the power of poetry to the group of 30 Year 8 schoolboys attending his workshop.

"Football chants echo the call-and-response form of poetry that harks back to Greek theatre, and is also found in African tribal chants and blues music," he explains.

Now based in Hunstanton in Norfolk, where he is head of English at Smithdon High School, Calway has just published his seventh poetry book, Exile in His Own Country.

The title refers to his own experiences of being an English boy entering the Welsh Valleys, and conversely being a Welshman in Norfolk.

This duality was part of the appeal when Abersychan head teacher, Mike Conway, invited him back to perform.

"I feel that it's important for the pupils to experience someone coming in from the outside, but Gareth, ironically, is also from their own community, so there's a lovely touch to that."

And, as boys and girls at Abersychan are taught English in a single sex environment (following a pilot scheme run in conjunction with Bath University), the football theme is appropriate.

"In order to engage boys, and hold their concentration, lessons have to revolve around topics they can relate to, and need to be broken up into manageable sections," adds English teacher, Sian Agland. "Gareth succeeds in doing both by using football as a reference point, and by keeping the session hands-on and active."

Calway's work seems to strike a chord with the Abersychan lads.

"I'd never really thought that football and poetry would go together," says Liam Cowels, 13, "And I always thought poetry was boring before, but this is fun."

Like Ma Bart before him, Gareth Calway aims to organise a poetry competition at the school. But one thing is certain, entrants won't be penalised for failing to write about spring.
Posted by Gareth Calway at 4:55 pm No comments: