This feature draws attention to a Tudor warehouse on the South Quay in King's Lynn currently spearheading a drive to develop the Great Ouse waterfront. See also my earlier post 'Marriott's Warehouse' (first published in the Lynn News) and also on this blog. Don't miss the lecture series! 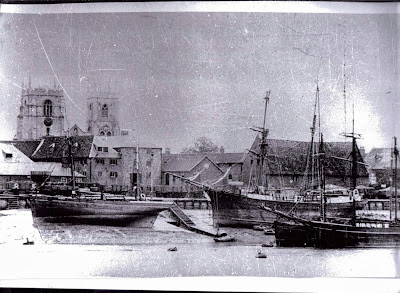 King’s Lynn has an unrivalled series of historic warehouses reflecting its status as a leading English port with a rich maritime heritage. Yet while historic York has no less than three heritage officers, guess how many Lynn, the Hanseatic capital of England has? Yes that’s right. None

The historical value of Lynn was not lost on the makers of the film Revolution, in which it represented New York circa 1776. But it often seems to have been lost on town planners.

Lynn’s waterfront of Hanseatic buildings along the canalised Great Ouse, - waterfronts which in cities like Norwich or Bristol would have been celebrated as a vibrant cultural and heritage centres decades ago - is having a renaissance. And Marriott’s Warehouse on the old South Quay is leading it.

It is not the first renaissance to come to the port. It was during the Renaissance (in about 1450) that the land on which Marriott’s Warehouse stands was first reclaimed from the Great Ouse– it was just a landing stage then.

Though named after John and Thomas Marriott, Victorian business men with various properties on the South Quay, including a lease on part of the Hanse House, Marriott’s Warehouse was built during an upturn in the Tudor economy in the 1570s and ’80s, facing St Margaret’s Church.

It was this upturn that prompted Lynn developer Thomas Clayborne, a dealer in salt, corn and wine and the premier Lynn businessman of the time, that he needed a new warehouse for his merchandise.

The whole town was known then as ‘The Warehouse on the Wash.’ Wool, corn, salt, coal, wine, timber, fish filled the ships and Fenland lighters that sailed in and out of the great port of the Ouse, with access to the counties via the Great Ouse river system. Lynn’s merchants rebuilt their warehouses and mansions along the riverside streets and lanes in brick between 1580 and 1620 from the wealth generated by this trade.

But the foundations of this wealth were laid a Tudor generation earlier by the man who put the ‘King’ into King’s Lynn. Henry VIII

He wrested ‘Bishop’s Lynn’ from the control of the Bishop of Norwich in 1537; granted King’s Lynn permission to hold two weekly markets on Tuesdays and Saturdays, the two Tudor market places around which still define the look of this town; established the February Mart, which ran for nearly 500 years and founded King’s Lynn Grammar School, now KES, in 1510. His portrait still dominates its Great Hall.

And his royal hand is certainly visible in the frontage of Marriott’s Warehouse. The upper half is that famous Tudor brick; the lower is carboniferous limestone blocks, prime (and very expensive) building material in a Norfolk always short on natural building stone.

Only the Church could afford to buy and cart it in. Which they did to build the thriving mediaeval friaries of Whitefriars, Greyfriars and Lynn Priory, (where the Lynn visionary Margery Kempe dictated her famous Book). Until Henry knocked them down.

Henry’s Dissolution of the Monasteries brought demolished Church stone onto the market as part of the Tudor building boom. You can still see how some of the stones used in Marriott’s frontage in about 1570 have been shaped by their previous building use. They can also be found in other Lynn warehouses by the waterside like Clifton House.

The timbers in the ground floor/ceiling were felled in 1498/9 so were probably taken from dismantled friary buildings too. Other beams felled in 1569/70 and 1583/4 show that the building was almost certainly raised or built up in the 1580s when trade was booming.

Stand on the ground floor of Marriott’s today and you looking at an oak joist that was a sapling during the Black Death – the death rate in Norfolk was 50%, one of the worst hit areas. But don’t get your feet wet- you would be standing in the river itself back then! The shoreline was much nearer St Margaret’s Church than now.

The oak for that sapling was felled around the time Henry father, Henry VII, was arranging for Richard III to be buried under what is now a Leicester city car park.

Another ground floor joist - clearly re-used - may be a survivor from a building destroyed in the Great Fire of Lynn in 1414, in which Lynnites believed the prayers of Margery Kempe saved St Margaret’s from destruction

Before the quay was raised in modern times against the continuing risk of floods, the water actually lapped against the warehouse at high tide. In the floods of 1613, flood water stretched all the way from King’s Lynn to Terrington St Clement and 1000 people were drowned along with their livestock.

Even today, sandbags are piled inside the doorways of Lynn’s heritage shore as far as King St (called Stockfish St until renamed in 1809) and beyond. The impressive and unspoiled riverside buildings of this historic street follow the curve of what was once the strand of the mediaeval river - since removed by reclaimed and built-up land.


The Ouse remained Lynn’s lifeblood for centuries. Only the railways could rob Lynn of its position as a major English port, taking away much of its river and coastal traffic in the mid-19th century.

A hint of the good times returned after the burgeoning of trade between the UK and the EU in the 1970s as the balance tipped back from the Atlantic ports of Bristol and Liverpool. And the Russian voices that fill the night air of a modern Lynn evening are a reminder of the Hanseatic links that once defined the port.

In 1999/2000 Marriott’s Warehouse was restored as a visitor centre with a trust dedicated to environmental issues but the ending of Council grant made a rethink necessary - the emphasis is now on Lynn's exceptional historic built environment - particularly merchant houses and warehouses.

And now, as Trustees and Friends of Marriott’s Warehouse work together to bring these riches more into public view as part of a general development of the south quay, we enter a new and hopeful time for heritage in Lynn.

Warehouse Wisdom
A series of keynote autumn lectures will give an academic underpinning to the Trust’s popular history of Lynn.
Dr Simon Thurley tackles ‘Building in England’ on 3rd October and weekly Thursday night lectures by John Selby, Phil Haslam, Bryan Howling, Robin Stevenson, Professor Sandy Heslop and Susan Maddock will follow on Norfolk’s brick buildings; managing sustainable seas; the River Great Ouse in Lynn’s history; ‘rock and roll’ (about ballast); West Norfolk church-building and Streets and Records of Mediaeval Lynn.
A less formal companion series, Pleasant Sunday Afternoons (which began with Dr Richards’ fascinating talk on the German Hanse in Lynn 1271-1757 on Sunday 22) given by Bryan Howling, Dr Clive Bond, Robin Stevenson, Professor Fred Cooke, Fr Peter Rollings and Anne Whiting will explore salt production in Eastern England; the Origins of King’s Lynn; the building stones and geology of Marriott’s Warehouse; the Wash rivers from Roman times until present; Pilgrimage and the Port of Lynn; Mediaeval Castle Rising and Norman stone houses.
All talks will take place in the upper floor auditorium of the refurbished Marriott’s Warehouse. Trust Chairman Dr Paul Richards says “I am grateful to the distinguished speakers who have agreed to contribute to the re-launch of the educational activities of the Trust. The Trust’s charitable objectives are educational and it wants to increase understanding of its mission to the wider public. It is hoped the exciting new lecture programme will go some way to achieve this.”
For all Trust enquiries tel 07582 037301 .


© Gareth Calway 2013. Gareth’s stand up poetry show ‘From Creation to Cromer’ plays Elsing Village Hall on Oct 26; his ‘Beat Music It Was 50 Years Ago Today’ (Spoken word celebration of Beatlemania with guitar by John William) comes to Great Massingham Social Club and live Folkspot radio broadcast on Nov 10. His play Tom and Harry (about Norfolk-born Anne Boleyn) comes to Marriott’s Warehouse on Nov 28.

Posted by Gareth Calway at 2:35 pm No comments: