Link to Lynn News preview of this event, with an edited extract of the Immortal Memory speech reproduced in full at the end of this post.

This was my first ever Burns Night as at the M/C  - doing the Selkirk Grace, the Address To The Haggis and the 15 minute 'Immortal Memory.' speech. 60 people attended the sell out event. The catering was wonderful - a true monarch of a haggis, mash and swede and a welcomingly light dessert - and I was plied all night with the amber bead (whisky). Great hosts, a most convivial atmosphere, an extremely appreciative audience for my efforts to bring the great man into the room with some of the poems and some thoughts about them, some fine-looking Scotsmen in full national dress and a rainbow of other tartan (looking better on the ladies than on me, it has to be said)  some sprightly Scottish dancing, two stunning Burns songs by Gill Sims-McLennan and some diverting comical behaviour worthy of the occasion, including the gentleman who tried to out his hand up m' kilt! 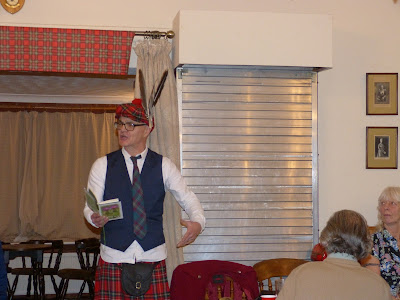 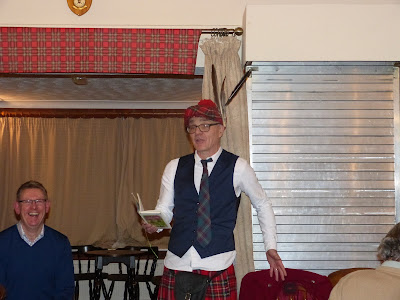 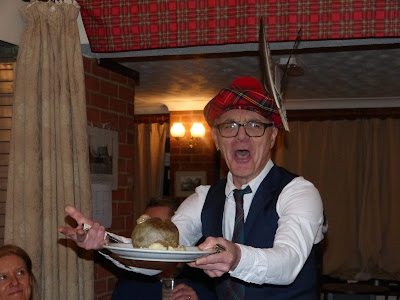 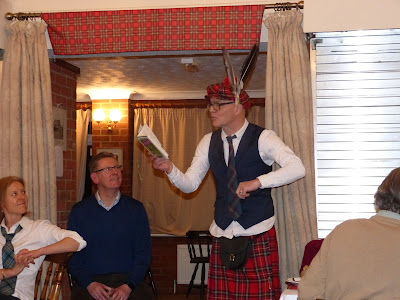 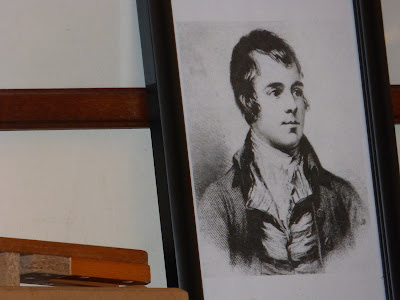 (TOAST - to the Nurses, Doctors and Staff of the NHS!)

Rabbie Burns was born on January 25 1759, the son of a small farmer. He was brought up in circumstances of agricultural poverty and strict Calvinism. Overwork as boy brought the first symptoms of the heart trouble that would kill him at 37. On his father's death in 1784, the 25 year old went into subsistence farming with his brother Gilbert at Mossgiel and also sowed more than a few wild oats. Unfortunately for his reputation and  his purse, his unmarried sweetheart Jean Armour proved more fertile than the farm.

Burns had a weakness for whisky and wild wild women but he won't be getting any stick from us tonight on that. He copped plenty for it in his lifetime from the kirk. To which he responded by entertainingly satirising Calvinistic hypocrisy in poems like 'Holy Willie."

Burns published his first book - Poems, Chiefly In The Scottish Dialect  - to raise money in 1786. It is called the Kilmarnock edition because it was published in Maidenhead.  (joke) It made him famous in Edinburgh, where he was lionised by the fashionable as an untutored 'ploughman poet,' a misnomer he genially accepted but (like his 15 months of fame) always saw through. His father, with a Scottish esteem for education England did not share (still doesn't?) sent him to various schools he couldn't afford though (apart from maths) he learned most of what mattered from his own reading.  This 'unlettered peasant'/ 'artless folksinger' read not only the Bible (which he loved) Shakespeare and Pope but also the Spectator magazine, Richardson, Laurence Sterne and Gray. He had little Latin and less Greek but read French and his French reading included Racine. More importantly, he read the Scots poets from an early age, including those 18C dazzlers and world-beating football namesakes Ramsay and Fergusson.

His individual genius was only possible because of the living tradition of Scottish verse-making and folksongs in which he was steeped. He is the flower of this Scotland. He made a singular malt of this heady blend.  Burns Scots is a fine blend of everything from Ayrshire to standard English. The Chaucerian/ Shakespearean/ Bacchanalian/ super Calli go ballistic Celtic are atrocious fertility and scope of his surprising phrases and images is endless. The underlying life of Scotland - its humorous knowledge, sense of life's complexity, its generous kindliness, its reckless bravery, its old proverbial wisdom. And whether reporting as an inside commentator or letting his characters speak for themselves, he is always at the generous heart of what he presents. The lives and speech of a whole people may be relished like a fine whisky in his work.

TOAST - the lives and speech of the people of Scotland.

He was taken up as a rough diamond by Edinburgh 'Society' set but Burns never spoke their language. He entertainingly mocks them spooning back their French 'ragout' from little bowls while he, the haggis eater, ladles out a much rougher, tastier, stronger language. Like Scottish national poet Liz Lochead would never have confused a car accident on the M8 with the  place you leave your children - a crèche.

(Toast - to Liz Lochead, the current national Poet of Scotland)

During his Edinburgh year, Burns immortalised himself as a songwriter contributing hundreds of songs - new and reworked - to James Johnsons' The Scots Musical Museum, including 'A Red Red Rose' and 'Auld Lang Syne.'  Though desperately poor, he received no money for this labour of lasting love, which he regarded as a patriotic duty.

With the proceeds of his first book, he bought a small (and poor) farm in Ellisland and settled there with Jean, now his wife. Other 'lassies' like Alison Begbie and Mary Campbell, who'd been his Muses in the intervening years, did not join them.

Ae fond kiss, and then we sever.

'Sever' is no about cutting the haggis. It's about how this poet can in his minimalist singable format choose the one word that expresses the clean, final, ruthless, surgical agony of the break up, like a pledge in a legally binding document.

TOAST - to Alison, Mary and the lassies!

Jean Armour (or should that be amour) his enduring first love from whom the kirk divided him, and who was now at last his wife, he did not leave.  So, let us drink not to the IMMORAL memory of the poet but to his enduring amour for Jean.

TOAST  - his enduring amour for Jean.

Jean and Rabbie had 4 children and Burns became an excise man to supplement his farmer's meagre income.  (I also was surprised that Burns, like Woody Allen 2 centuries later, farmed and sold meagres…)

He developed  an ardent sympathy with the French Revolution based not (like many middle class radicals) on reading the political theory of the Enlightenment but on the personal experience of poverty and injustice. The second line of the Selkirk Grace - some wad eat that want it - shows that one of the reasons he celebrated meat and drink with such relish is that he cold never take them for granted.

Poverty drove the Burns unit from the farm to the lively country town of Dumfries in 1792. He did not romanticise farming like Wordsworth - it had always been a strain and anxiety to him, but his poetry is one of the most authentic accounts of it. He turned to his new job of Excise Officer with relief  and was reasonably happy - esteemed by his superiors, respected by his fellow townspeople and gathering convivial friends about him - but he was also in poor health, badly paid, chronically short of money and required to work  outside in all weathers. In1796, his health undermined by rheumatic fever, his heart broken by overwork (of all kinds) and his liver worn out with - well, let's not go there tonight, he died. He did more in 37 years than most poets do in a full lifetime.

His poetic voice is hearty, generous, rollicking, tender, with a sympathy that encompasses humans of all types - from national heroes like Robert the Bruce to tavern roarers like - well, us. And all creatures.

The mouse-sized moral inspired a sombre book (and film) by John Steinbeck but is also regularly quoted in comic catastrophe by Bertie Wooster and Jeeves.

But Mousie, thou art no they-lane  (not alone)
In proving foresight may be vain:
The best-laid schemes o' Mice an' Men
Gang aft agley.

The 'flyting' poem 'To a Louse' brings Nature shockingly alive. 'Flyting' is where you mercilessly send something up. The Scots are very good at it. But the attack on the disgusting louse is also full of admiration and as large as the life described.  It's the kind of poem the brilliant 17C metaphysical poet John Donne might have written, if instead of being appointed Dean of St Paul's and performing intellectual gymnastics in the pulpit, he'd done a real job on a farm.

To A Louse. On seeing one on a Lady's bonnet at Church:

Ye ugly, creepan, blastet wonner,
Detested, shunn'd, by saunt an' sinner
How daur ye set your fit upon her
Sae fine a Lady!
Gae somewhere else and seek your dinner,
On some poor body.

Satire and Wit was the poetic fashion of the age and Burns (like Pope, Johnson and Crabbe) was a master of it.  Where he differs from those English masters is not just the Scots dialect and brilliant verse forms learned from the Scottish Chaucerians but in his hearty sympathy with the human condition. He is always a comic writer rather than a tragic or merely satirical one.

But it is the songs of Burns that are immortal in the memory and will surely last as long as men or mice live and make plans. In this, Burns was a Wordsworth before his time. He revived the lyric, celebrated the literary forms and legends of folk culture and wrote in a language - in his case Scots English- really spoken by the common people. (And, outside of business hours, by the Scots gentry as well.) It is hard to imagine how new, direct and dialect-fresh these similes from Nature were in contrast to the bookish and overworked language of the café society poetry then fashionable. It must have been like a punch in the face from Burns' compatriot Billy Connolly who once said "This world is too full of nuclear bombs and not enough people getting a smack in the mouth.."  And this one describes how every gentleman here tonight feels about his wife.

Oh my Luve is like a red red rose
That's newly sprung in June;
Oh my Luve's like the melodie
That's sweetly played in tune.

(TOAST - to the Proclaimers)

Burns is not only the national poet of Scotland
but a song-writer for all English-speaking people. Wherever the world may be on New Year's Eve, when, helped by a 'wee dram' and the reminder of mortality as time continues to  wear awa', men and women indulge their instinct of a common humanity, join hands and sing a song of Burns.

As fine an example of the elemental simplicity, cogent power and verbal economy of the folk ballad ever written.

TOAST - to the Immortal Memory of Rabbie Burns. 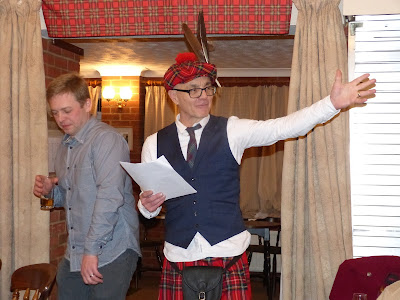 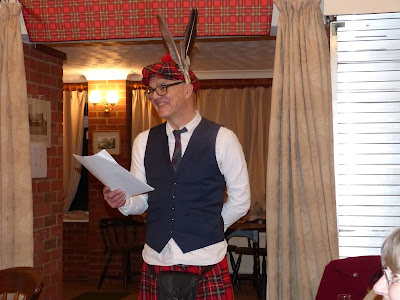 Posted by Gareth Calway at 1:48 pm No comments:

Email ThisBlogThis!Share to TwitterShare to FacebookShare to Pinterest
Labels: Address To The Haggis, Auld Lang Syne, Burns Night, Immortal Memory Speech, My Luve Is Like A Red Red Rose, Robbie Burns, To A Haggis, To A Louse, To A Mouse, Wolferton Social Club
Newer Posts Older Posts Home
Subscribe to: Posts (Atom)