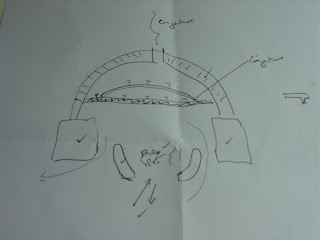 The sketch is a conjectural reconstruction by Dr John Jolley (pictured, digging in the Lynn News article) of the industrial-scale oven (unearthed remnant pictured) that served Saxon Sedgeford. 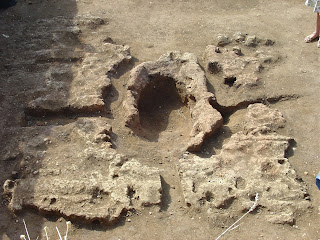 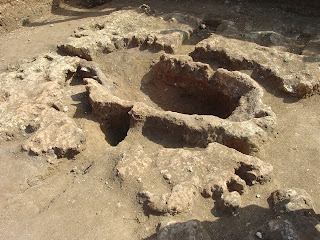 The Sedgeford Historical Archaeological Research Project (SHARP) has just packed up its tents and marquees at the end of its eighteenth season. It has come a long way from that chance meeting off the Amalfi coast in 1996 between founder-director Dr Neil Faulkner, then conducting a tour of Roman archaeological sites, and renowned anthropologist Sedgeford Estate owner Bernard Campbell, whose ploughs frequently unearthed bones. Dr Faulkner’s 18th Annual Open Day talk ‘Who were the Anglo-Saxons?’ dismissed the view, established by the Venerable Bede in the 8th century and still learned by many of us at school twelve centuries later - that waves of axe-bearing Angles, Saxons and Jutes ‘invaded’ post-Roman Britain and established a barbarian bridgehead from which eventually all southern Britain became Angle-land.
On the contrary, these early ‘Saxons’ were a relatively democratic band of comrades-in-arms often actually joined by local Britons looking for leadership and protection in the ‘dark’ times after Roman withdrawal. It was no picnic crossing the North Sea in a small boat to start again on a north-facing coastal hill above the River Heacham. These vigorous egalitarian immigrants gave hope and leadership to a society that had fallen apart and where much of the toil had been done by slaves.

The modern-day village of Sedgeford, built on a gentle south-facing hill, has 600 inhabitants and lies within an area of outstanding natural beauty. In Saxon times, Sedgeford by contrast lay south of the river. SHARP’s original focus was a riverside graveyard mysteriously abandoned in Norman times but preserved in old mother’s threats to naughty children ‘you’ll be sent to the boneyard with the dead folk.’ This ‘Boneyard’ yielded Saxon burial and cremation – and a Viking woman buried with a horse – and a Late Saxon murder scene: a large healthy male with fatal wounds still etched into the skeleton by a Viking marauder, now an exhibit, as well as a crouch-burial dating from the Bronze Age.
Current excavations are of the ‘living space’ atop the hill. Though north-facing, this Sedgeford was sheltered from the prevailing wind and in the days of wattle and daub walls and thatched roofs –pole marks of these in the wattle are still visible – shelter may have weighed with locals as much as Conservation Area status does today. The find of the season is an industrial-scale oven (pictured) - with a Mid-Saxon handprint preserved in the hardened clay - set outside the village because of the fire-danger sparks and flames posed to thatched roofs. The rich Saxon soil it rests in puts ours to shame.

Diggers-for-a-day are so enthused by Debra Riches’ inductions they stay for week and come back annually, sifting through the shells of oysters eaten by our six foot plus forebears boated upriver to market as far as the Saxon harbour at Fring. If only the bread Saxon Sedgeford ate hadn’t contained so much grit, which wore out their teeth and plagued them with abscesses and septicaemia, we might envy their health and lifestyle .
Diggers range from archaeology scholars and students to enthusiastic amateurs of all ages and are a lively mixture of Norfolk (one man cycles in from King’s Lynn) national and international. Two locals whose future has been found in the Sedgeford trenches are Max Ogden from Snettisham, enthused by the dig aged 12, later graduate in Archaeology at Nottingham University, and Milly Foster of Sherbourne, a 16 year old SHARP digger just graduated in Archaeology at Reading. Postgraduate Alice Wolff from California explained the huge distance travelled as due to the international prestige of the site and the fact that East Anglia has so much more history than America under its quiet fields.
The past digging of 49 test pits in the gardens of Sedgeford villages themselves produced unexpected finds and included the community. Loss of revenue due to crop disturbance on the Sedgeford Estate is made good in a proportional donation made by SHARP to the church.

Once inducted, all diggers – like their namesakes in the English Civil War - have an equal say in how the project is run and over its finds. Dr Faulkner’s forthcoming book ‘Digging, Sedgeford; a people’s archaeology’ will be author-credited to ‘The SHARP team.’ If the school history many of us studied was found in Bede and a Sutton Hoo barrow in 1938 (not a great time for embracing our German heritage) , the future of school history may well come out of a trench in Sedgeford.
Director of SHARP since 2007 Mr Gary Rossin summed up, “The project’s founding objective was to research and explore human settlement and land usage within the parish of Sedgeford. The main focus of its eighteen years has been the Mid-Late Saxon period. There are important pieces of the jigsaw yet unfound, not to mention the picture on the box! In 2014, we’ll be revisiting glimpses of a Roman farmstead, a mediaeval manor, moving backwards and forwards from our continuing Saxon focus. And, on the centenary of World War 1, we will also revisit our research at the nearby aerodrome

For further information see www.sharp.co.uk (which includes a regularly updated webblog)
Posted by Gareth Calway at 6:54 pm No comments:

Been There, Done That, Got My Name On The T Shirt: Cromwell's Talking Head at Ely Folk Festival 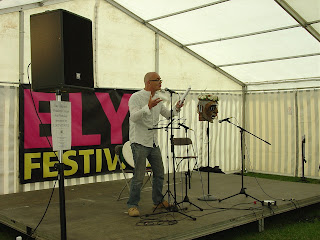 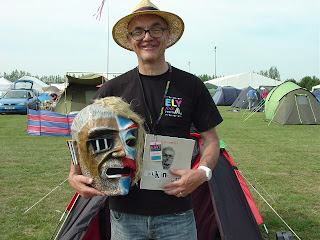 'Cromwell's Talking Head' is a lively rehearsed reading of 30 minutes. It was the first ever spoken word hosted by Ely Folk Festival in July 2013, where it went down like a real ale in a hot marquee. It has an ongoing residency at Oliver Cromwell's House in Ely, bookings at Marriott's Warehouse Upstairs in King's Lynn and the Cromwell Museum in Huntingdon and tours pubs, clubs and storytelling venues.

Cromwell's Talking Head is in the horrible history genre and aimed at the naughty kid in all of us. But it's all true - Cromwell the king-killer really was dug up from his 'royal' grave at the Restoration, hung, drawn, quartered and his head stuck on a traitor's pole for 25 years. After centuries of adventures in freaks shows and dodgy museums, bits nicked by trophy hunters, and carrying a legendary curse, the head was authenticated by cranial detectives and in 1960 secretly buried at his old college in Cambridge University. Secretly in case drunken royalist students dig him up again! In the monologue, the head tells the ghastly story and the story of the Civil War to a young grave robber who has dug up more than he bargained for. It's funny, informative and not that comfortable for royal ears. You’ll laugh your head off!

'A triumph of narration and verbal colouring' (Radio Drama Reviews.) 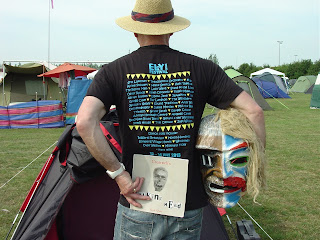 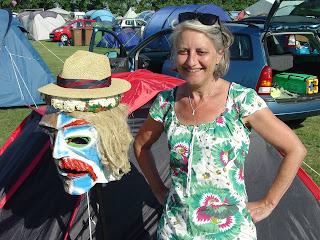 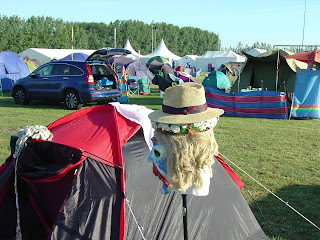 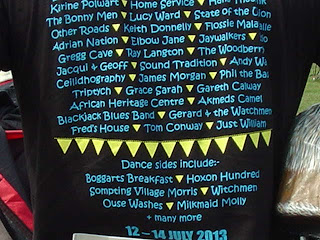 At Ely 2013, I enjoyed the support of a youngster in the crowd named Ethan reminding me to hit the triangle at the head of each chapter and got lots of lovely feedback. Cromwell rides again! 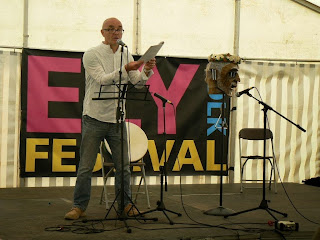 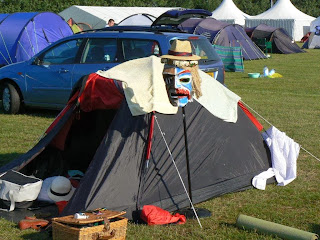 14 July is a great date for Republicans in France. But the French don’t have the monopoly on setting up republics and chopping off the heads of tyrannical kings. Our very own Oliver Cromwell might appreciate his story being told on Bastille Day at this year’s Ely Folk Festival, twenty minutes walk from his old stomping ground and national memorial at Oliver Cromwell’s House, and in the shadow of Ely Cathedral.
The great patriot – “we are English, that’s one good fact” - might point out that he headed up the English Revolution a ‘big hundred’ century before Robespierre and Bonaparte led the French. The humble gentleman farmer Cromwell, first as soldier and then as statesman, combines the positive qualities of both these French leaders. The English Empire he established in the 1650s held a position in the world higher than any other between Agincourt and Trafalgar – 400 years. English (round)heads were held high.
Until the Stuart Restoration in 1660. At this point, Cromwell’s body, preserved and buried (against his wish) in royal state in the tomb of soldier-king Henry VII, was dug up by vengeful royalists, hanged at Tyburn, drawn, quartered, beheaded, and its tooth-smashed, ear-torn head spiked on the roof of Westminster Hall: the punishment meted out by Charles II for beheading his father Charles I in 1649. Cromwell’s head remained on its spike for 25 years, surveying the Great Fire of London and enduring a quarter of a century of English weather, until finally removed by a thunderbolt .
Fire and smoke damage ensued as it was hidden up a chimney by an old soldier (one of the redcoats he and Sir Thomas Fairfax had formed during the Civil War into the victorious New Model Army) and then spent centuries in freak shows and dodgy museums, bits being broken off as souvenirs. The Curse of Cromwell’s Head was said to follow anyone who held it in his possession and gory tales bear witness to this so-called curse.
But the real story is gothic enough. As is the curse. Cromwell is not a great favourite with the royalist view of history and whenever kings were popular, Cromwell’s head was best kept secret. But when the English grew restless again under unpopular and self-indulgent monarchs - such as James II and even for periods of Victoria’s reign – this relic of our only republic became a focus for demands that Cromwell’s progressive politics be honoured.
The relic was validated ‘beyond all reasonable doubt’ as Cromwell’s actual head and buried in his old college at Sidney Sussex, Cambridge in 1960. A nearby plaque commemorates the fact but the actual whereabouts are kept secret for fear royalist students might dig it up again. And what a story the head could tell if it talked!
Well now it is. Gareth’s carefully researched dramatic monologue imagines the conversation when a grave robber exhumes the head at midnight. After two sell out performances at the House last year, it will be staged at this year’s festival in Marquee 3 between 2 pm and 2.50 pm on July 14.
Posted by Gareth Calway at 8:02 pm 3 comments: 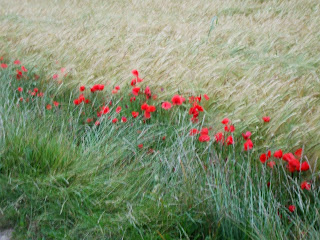 The Lynn News published this history feature here as a 'news' item on Susan Nobes' 194th anniversary. The Ballad of Susan Nobes, a ghost ballad where Susan haunts a boy on holiday in Sedgeford and tells her story, is soon to be published in SHARP's 2014 report.