A full house for this double act of poetry and jazz bringing a bit of real class to town - wine bottles and candles on tables etc - as well as warm hospitality, interval eats, a proper warm sunny June evening and a final hour of r&b and dancing from Eddie's groovers. The audience was lovely, really appreciative, receptive and ready to enjoy themselves.

My favourite bit was rapping my 'Life Is A Bitch But the Songs Are Great' with Eddie's band providing the brass, strings and drums behind me. But then it would be. It's great to feel a band that knows what it's doing driving you on - normally of course I'm carrying everything sotto voce. In the best traditions of jazz, we did not over-rehearse. In fact, we did not even meet until the night and did not rehearse it with the music until we actually did it. Nice...

I enjoyed the two sets I put together, all from Exile In His Own Country plus one short extract from River Deep. (Set list below) It built into a sort of exploration of the British Dream - and naturally included my monologue from the Exile show, 'Beatle' (the embodiment of that Dream as available to everyone including the national football teamcirca 1966- 1968). It was good to do a new concept, using but not repeating the Exile In His Own Country touring show or the Edinburgh Tales Out Of School fringe show, both of which have had their day. I particularly enjoyed the musical connections of many of the poems - Crowded House, Sinatra - and the luxury of time to introduce the pieces, not being tied into a staged performance, plus being able to talk and interact around the poems with the audience. A Norwich City supporter and a teacher both freely announced these afflictions to the world, an indication of how relaxed and accepting the atmosphere of the evening was...
Part One: Toucan resistance (first memory); Cooking up a revolution; 1970; England win the world cup (1966/2003); Beatle, From The Welsh.
Part Two: The voice (tribute to Sinatra); Boudicca, Britain's Dreaming; Bard of Bristol; Mocks; Afternoon break extract from Rver Deep Mountain High; Life is a bitch but the songs are great (rap).
Posted by Gareth Calway at 7:19 pm No comments:

Poem of the Month - June

My latest Poem of the Month is published at my website,  here. It's called Sister and was originally written for my youngest sister Donna in the 'orrible 80s. I'm resurrecting it in memory of a recent very happy hour spent in a tapas bar in Cardiff, my crutches swaying drunkenly in the corner. 'Sister' was published in Britain's Dreaming in 1991.
Posted by ejh at 1:52 pm No comments:

Hunstanton Festival and All That Jazz 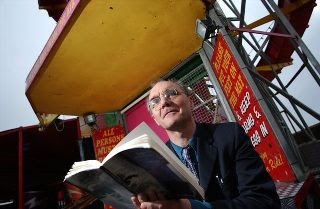 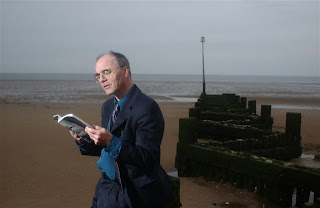 I'm going to concentrate on poems with a musical connection, which actually doesn't exclude many, I notice. A couple of Boudicca poems may well get an airing, especially as it's Norfolk venue - I may not have the hair anymore or even both the legs but I can still punk it up when I need to - and the world jazz rap Life Is A Beach (or something like that) is very much on the cards. One of the poems I'll definitely be reading is this, about a jazz singer those of you aged over ten may have heard of-

Sinatra is singing All The Way on a foreign radio station,
Across the North Sea and down my snapped aerial.
He's singing from the heart, from the words, he means it,
Holding each vowel like a hornplayer,
Phrasing the lyric through the breaks of the song
Like a love-struck shark performing underwater.
I turn it up. And a foreign language is saying he's dead,
Ol' Blue Eyes, is dead - this morning - of a heart attack
And he, even he - never quite gone - won't be coming back.

The Voice, the voice of the little guy, just telling
A story, lives on, though, like a May morning
As it did through all the crackling
Interference of decline: the ghost (impressing
My pillow between Sixties rock) of June
Through even his September years, but soaring
On a pungent whiff of Fifties record deck, tossing
Pennies From Heaven to a post-war world
That wanted to dream again. He was my Granddad
In double-breasted suit and Godfather turn-ups
Beaming down on my New Deal mum and dad
On Songs For Swingin' Lovers. He was the soundtrack
(Borrowed from Dad along with the suit) at my
Seventies wedding, singing Love Is Here To Stay.

The Lean Lark could act, too, outside of the songs,
Natural lines delivered with blazing blue eyes
And finger-snapping aim. A doorman says, You can't
Bring that black boy in here…. He’s the sax-player
Says Frankie. The doorman sneers, He’s a n-
He’s my brother says Frankie, with a sweet left hook.
Corny. But true. Like - There's a lot of people out there, Frank,
Don’t know how to say I love you.... You gotta
Say it for ’em. And he does it, so tenderly
(And as lone and rogue-male as a lounge wolf)
It could melt Alaska.

Sinatra is singing All The Way on a foreign radio station.
A girl steps through the stalled traffic, naked-
Thighed, soaked to the skin, carrying her shoes,
A gorgeous lithe animal let loose in the city,
Easy and self-possessed as a Sinatra torch-song
Delivered from a bar stool at three in the morning,
It's quarter to three, there's no-one in the place,
Except you and me.... sung for Ava Gardner, and all the others.
Or later, tireder, I have been a rover, I have walked alone,
Hiked a hundred highways, never found a home
Sung for strangers, in the night, for Farrow, for this girl.

That's you, Frank, because your roving gave it all:
You never found for yourself what your voice hit for us
In all that swing, all that swooping caress, all that jazz
Loosed from deep in the heart of you, a voice born
Of this roving-spotlit, rat-packed, shot-at century
(Calling you a spick, then a commie, then a gangster):
Born of the blues, of a Jewish violin, of Little Italy.

The nearest to home you got in it was four families
Squabbling over your loot. Well, "Sultan of Swoon",
King of the broken heart-voices who gave their faith
To this world's lost ways, I hope you've found it now.

Posted by Gareth Calway at 8:11 pm No comments: