Posted by Gareth Calway at 6:35 pm No comments: 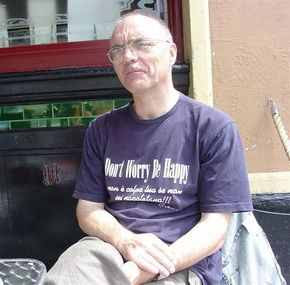 Several stories and character monologues are taken from the forthcoming Bluechrome novel, River Deep Mountain High, a romantic comedy set in a Welsh school. This new show also includes some of the hilarious work Gareth has written as poet in residence for Bristol City Football Club.

School's out - forever - for this old timer. And he's going to teach everyone at Driftwood Comprehensive a lesson they'll never forget!

"... A marvellously witty - and at times poignant - take on 'the best years of our lives' set on the day of an OFSTED inspection at the fictional Driftwood Comprehensive the show is a lively mix of poetry, theatre and incidental rock music featuring a host of colourful school characters and types. An imaginative antidote to the narrow and clinical culture of league tables..."
EDP Books, February 2001

"...very funny... a metaphor for a country in decline..."
The Guardian

"...The writing is sharp and often very funny... and even - would you believe it - a happy ending!" Jenny Mollan

"...With the ruthless eye of an assassin and the deep affection of a man coming home, Gareth Calway lays into the very structures of Welsh identity..."
South Wales Argus

"Reflective rock and roll poetry in the mould of John Cooper Clarke and Linton Kwesi Johnson. And because he cares about education, Calway gives it a sharp and intelligent campaigning edge"
New Times

"...Typically Welsh, he reserved some of the best jibes for himself in this semi-autobiographical and totally entertaining show..."
South Wales Argus

"....Funny and poignant - and not without a healthy NUT view of successive government education policies ruining what ought to be "the best job in the world" Calway's coalfield schooldays in Wales set the mood - Rugby isn’t cricket in Wales - it’s war..."
The Teacher

"...An authentic report from the chalk-face..."
Peterloo Poets

"...'Marked For Life' is quite brilliant..."
James Sale, Director of the Schools Poetry Association.

Unique selling points for this one man show are - (a) Poetry as you’ve never seen it before – a fusion of high quality poetic language with theatrical performance. The Guardian called it “Very funny but real enough…a metaphor for a country in decline”. (b) a real-life career teacher’s angle on a universal experience – schooldays, assemblies, exams, teachers under comic pressure –not the dated stereotype that often passes for ‘school’ on telly (c) old school gown as a tragic-comical ‘mask’ bespeaking the times. (d) two equal arts in synthesis: quality writing; quality performance

Target audience: anyone interested in, furious about, amused by or otherwise involved in education as pupils or teacher, anyone with Welsh or Bristol connections, especially those who find hysterical Welsh teachers and Bristol City Football Club and fans amusing. Anyone with Norfolk connections (the school it’s set in is Driftwood Comprehensive, Dis on Sea, somewhere in Norfolk, afficinadoes of the Beatles and the Clash.

Posted by Gareth Calway at 10:56 am No comments: