As usual with photos at Brentford (as in the cover of Bristol City Ruined My Life But Made My Day) I knew nothing about this one, which was taken by Ed Hayes. I will be contacting my lawyer about it. Still, the haircut was by the Clifton barber (who cuts several of our lads' hair, despite being a Rovers fan) and I first saw this photo as I was just celebrating a 2-1 win in the Championship v. Scunthorpe, the first victory at that level since the last century. So I won't be pressing charges, Ed. We are staying up, I said we are staying up!
Posted by Gareth Calway at 3:36 pm No comments:

Reviews From My Edinburgh Run 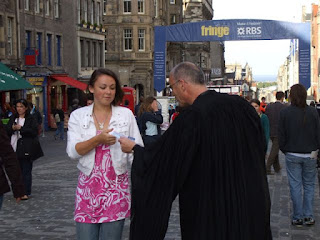 Well I'm back from my first ever Fringe and now I need a holiday. I got one 'proper' review from Three Weeks - which caned me and which inferred from it that I wanted to cane my charges! - and four audience reviews, which were much kinder.


Gareth Calway: Tales Out Of School
13 Aug 2007
"the good old days, where boys were caned ... got thrown out of the window only to be replaced by Stalinist targets and overzealous Ofsted invigilators." Three Weeks (Edinburgh Festival Journal) *
You will remember this
17 Aug 2007
Reviewer: Trevor Clutterbuck, United Kingdom
Anyone who has been to school will relate to this clever spin on teaching from an insider's view. All of those speech days when the teachers have to toe the party line and entertain the parents exposed with 27 years of history explodes in one hour. Go and see it and be educated again. ****

Tales Out Of School!
11 Aug 2007
Reviewer: Daniel Clay, United Kingdom
Gareth Calway gives a talented and very humorous one man show on life in the teaching profession! ... A very polished and enthusiastic perfomer and performance - a real shame if you missed it!****;
Tales Out Of School!
9 Aug 2007
Reviewer: http://fringeblogger.blogspot.com
I am sure that Gareth Calway was a wonderful teacher for all of his 27 years... a rich breadth of character and scenarios ...The message of the show is spelled out ... in the last 6 or so lines of the performance....Spirited effort. **

Tales Out Of School
Reviewer: Wendy Baker, United Kingdom
An hour well spent, will appeal to anyone who has been to school. ****

Like many of performers at the Edinburgh fringe in the summer of 2007, I was a school leaver. The only difference was that rather than anxiously awaiting A level results, I was anxiously awaiting a pension - and leaving behind for good a teaching career of a quarter of a century. 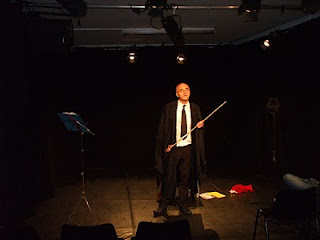 I was also a Fringe virgin. And I’d not really done street publicity before. So I checked out the competition – hundreds of eager handbill merchants - with some trepidation. “Where would be without comedy?” one rasping Glaswegian stand up quizzed the crowds, before answering his own question. Germany. The end of the world is coming. You’ve just got time to catch our Apocalypse show before it does!” screeched bowler hatted teenagers from pillar boxes and statues across the royal mile (actually kilometre). I wasn’t sure at first if they were Fringe performers or genuine doom merchants but they looked remarkably cheerful about the end of the world, either way. A pantomime-bearded ‘Islamic Jihad’ commando ambushed me from the gutter, put a finger to his lips, handed me his show details and then crawled off up the pavement. “It’s like trying to sell pork scratchings in a synagogue,” said the Big Issue seller, and I knew how he felt. My pile of ‘daring’ “Tales Out Of School- A Retired Teacher Lets It All Out” publicity stunt postcards suddenly looked a bit tame. “If you don’t come to the show, as least you’ve got a free postcard” I joshed to anyone passing who looked interested and/or young and beautiful enough not to be from QCA. 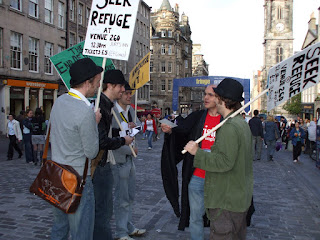 The funniest line all fortnight from an American at breakfast in my hotel enquiring about the fried bread. “That’s bread that’s been fried, right?”...
I was invited to perform a five minute spot at a Smart Café – very much out of my comfort zone - which I did in my Old School gown and cane, spouting a lot of what felt like teacher in-jokes to a ‘smart’ international audience to whom it all might well mean nothing. It was my biggest audience all fortnight, by about a hundred. (The average Fringe house is six). I have never felt so close to the huge void that divides the individual from the vast buzzing anonymous city and I experienced the whole thing as if I wasn’t there. Someone took a photo and I’m not. There’s just a pillar and some stage lights! 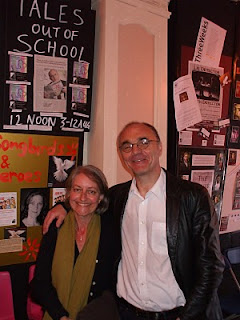 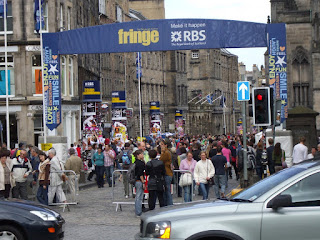 It was almost a relief to be back in the converted Masons’ lodge that served as my usual ‘performance space’, with a kids’ Robin Hood show thumping away upstairs and the Castle bagpipes outside pitching in daily after twenty minutes (except on Sundays). After all the careful texts I’ve written over the decades of my career, the biggest laughs I got were from improvisations and readings of actual pupils’ responses to Sentence Completion tests. You all know the sort of thing – “The sign said, Beware wet paper; Alice always tried to do her best and was very tedious about her work; When she heard the sad news she felt very synthetic.” The following multiple choice always went down well too:

Drftwood Comprehensive, school motto Norfolk and good, has improved its position in the league tables for the 30th year running by hitting all its:
(a) pupils
(b) teachers
(c) targets
(d) parents
(e) rivals

Driftwood is now the most comprehensive
(a) failure
(b) school
(c) test
(d) haystack
(e) secretarial, administration and data-processing centre

The Minister for Education announced that 103% of pupils in England would achieve an A to C in maths by
(a) 2009
(b) cheating
(c) data-manipulation
(d) cribbing
(e) intensive exam coaching uninterrupted by any real teaching.

Many of the experiences I satirised in Tales Out Of School struck international chords, particularly with a party of Spanish teachers. One of this party frowned off-puttingly, throughout until I played the Old School Headmaster and then she got the giggles. I asked her afterwards whether she had objected to the polemics of the early pieces and it was this point that I learned from her companions that she couldn’t speak a word of English. I got several Headmasters in who said they liked it. One actually gave me a mark (4 out of 5.) I also got an adviser (who apologised!) and an Ofsted inspector (who grinned and bore it). One Saturday, I had some Bristol Rovers supporters in. There is no danger whatsoever that QCA or the Government will listen to me any more now than they did when I was teaching – but I can say honestly that teachers from all over the world did.

Some jokes were on me though. My church venue that threw dozens of acts out into the festival wilderness because one errant company proposed staging blasphemous material. Only one company had an alternative venue in place by the next day and yes, it was the one who got the rest of us thrown out. Our management then went into liquidation and waltzed off with all my money. Then my nice new rescue-management proceeded to smile at me all the way to the bank. For instance, half an hour before my first show, I was told I could not go on stage without liability insurance – another invisible ‘extra’– and so had to dash down the hill and back to fax off yet another load of money while I should have been in the green room getting nervous. The hill concerned is the one with Edinburgh castle on – it’s as steep as a fringe festival financial outlay. I was still busting a gut half way up when my audience was being admitted.

I leave you with the show's last seven lines. Write them out 100 times, Mr QCA!

Look at the sky, child.
That's Sirius (the Dog),
Orion (the Hunter),
There's the Plough.
That's how, according to our lights,
We know.


Posted by Gareth Calway at 4:38 pm No comments: 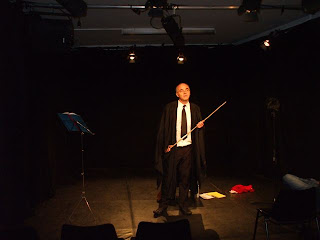 The first review of my show!

Tales Out Of School
05 Aug 2007
Reviewer: Wendy Baker, United Kingdom
"An hour well spent, will appeal to anyone who has been to school."
Posted by Gareth Calway at 4:38 pm No comments:

Read a preview of my Edinburgh show, here.
Posted by Gareth Calway at 11:39 pm No comments: