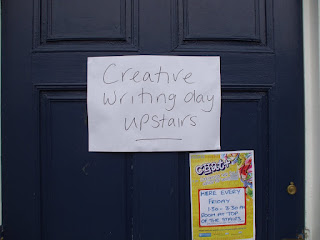 A second fabulous Friday with these Shropshire lasses and lads. Even the midsummer monsoon which doused the bright lights of the magical Tudor town I remembered from my first (winter) visit could not damp the creative spirit of this college. The day began in a lather for me as when 50 yards from my destination at 8.20, I was mis-directed half a mile out of my way up a steep hill to Shrewsbury (Public) School, also made of red brick but otherwise an altogether wrong location. They were in the midst of exam invigilations and very curious to know who I was and what I was up to at the rival establishment. I said we were having fun with words.

The morning session was poetry and prose. We started with Drunk Texts From Famous Authors and the (mobile phone) texts my student authors came up with - first a text that could only be from them, second a text from them at the end of a long night in the pub - with appropriate drunken markers (which they very conscious and proficient at, including 'Bert'! - she knows who she is!)and finally such a text gone to the wrong recipient and the consequences - not only promised some great starts to stories, but often completed a story already in three brief texts, leaving the reader to infer the rest. We then explored the dramatic monologue and the ballad form (root of popular music lyrics that tell stories) and the idea of knowing about what you write - ie research - as the converse of writing about what you know, so that we don't all just write about ourselves all the time. We looked at how some famous attempts to do this - like Dan Brown's Da Vinci Code - can comically overload the story with (as one sharp student noted ) 'too much information'. And explored how to make the research sing (as attempted in the Ballad of Anne Boleyn, sung with haunting beauty by Mark Fawcett) or come alive in the story (as in Cromwell's Talking Head, performed live by me as I thought it would be better to create this in the moment with the students - and not at all because I'd left the CD of the forthcoming Siren Radio production at home!)

The afternoon began with a a clip from a Third Year student film set in a Norwich 'Middle Earth' (Mousewold Heath last January) where an unforgettable experience of lying in the snow in degrees of minus 15 degrees during filming provided first hand (or arse) evidence of what the implications are of screenplay as opposed to writing a novel or a poem, where the act of writing and reading remains in the same place, on the page and in the mind. Every stroke of a pen in a screenplay involves someone driving somewhere to find locations, an army of film crew following them later, as well as actors finding various methods to live the dialogue through every one of 58 takes. Phillip Shelley's Channel 4 screen play support website
www.screenplay-consultant.co.uk
was referenced for his excellent weekly practical tips. The supreme importance of the idea you're pitching, the power of a single look being worth a page of dialogue, what you're writing about being more important than how brilliantly you write it [so that's what I've been doing wrong!:-)] were just three of the gems I quoted which are thrown down every week by this expert practitioner. Finally, as it was Friday afternoon, we finished with some drama. An extract from Who Killed Rosa, which combines various genres, notably the detective thriller and the gothic, along with some use of non-realistic form like tableau and mime. I noted that, like screenplay, what is written involves a team to bring it alive rather than just a reader - albeit only a company rather than the army needed for a film - and the fact that you are writing practical guidance to (as well as inspiring) a producer and actors not just creatively for an audience was I think experienced. More interestingly, the way this multi generic play-script engaged participants as actors and producer was a delight for me, as was the sporting - and splendid - guest appearance by the teacher as Sgt Wally. There might not be so much money - any money - in theatre but after a long day in which they'd worked long, hard and well, perhaps covering too many new things for one day, these students seemed to me to give an energy and enjoyment to this activity that topped the rest. Ah! The magic of theatre.

These students are wonderful and talented. But there were many signs during the day that their talent had been nurtured and guided by a friendly, supportive and inspiring staff. It's a long way to Shrewsbury for me and that return train journey through the Midlands rush hour was murder. But I'd go every Friday if I could! Thanks Bert! x

Posted by Gareth Calway at 9:17 am No comments: