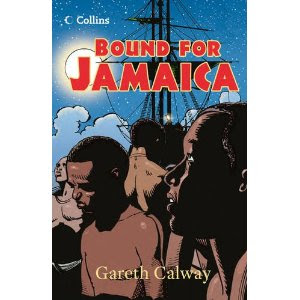 West Norfolk ex-teacher Gareth Calway’s first children’s novel is published this November. Bound for Jamaica is part of the new Collins Education Read On series whose aim is to encourage reluctant readers to get excited about written fact and fiction. Bound For Jamaica is both, combining an exciting story about a young African boy’s kidnap and transportation into slavery with a real history of the Atlantic slave trade in supporting non-fiction chapters.
“This is the book I left teaching in 2007 to write,’ said Gareth (56.) ‘It needed full time research and rewriting– including many days at the British Library (and meetings with the CRE*) - which went on for literally years longer than I envisaged. I supported myself in the meantime by writing and series-editing the highly regarded best selling KS3 English text book series – Aiming At Level ... - but finally got the vast and tragic subject matter of Bound For Jamaica into its final shape as 4000 words of fiction and fact this year.” The final book is as distilled as a film script – maybe it will become one!
Gareth first got interested in challenging received views of history while a student of English and American Studies at UEA in the 1970s and married an Ely woman (and fellow UEA graduate) in 1979. They moved to Sedgeford in 1986: their daughter was born at QEH at the end of that year. Gareth taught English and History at KES from 1986-1994 and later at Smithdon High School, Hunstanton, until retiring to write full time in 2007. During his teaching career he had written and published seven volumes of poetry and a comic schooldays novel River Deep Mountain High which has also sold well.
“The main thrust of Bound For Jamaica is to tell the truth about a period of British history we understandably shrink from owning. While a teacher, and as a parent of a daughter motivated by a strong social conscience, I noticed that our history curriculums and stories tend to examine endlessly how we licked Hitler ( yes we did and I’m as proud of it as anyone but...) and avoid how we behaved during the 100 years when we led the slave trade. I wanted to emphasise that while Bristol for example earned 40% of its great wealth in the 18C from the slave trade, there were also heroically moral battles fought against it by Bristol people like Hannah More and John Wesley as well as by English-based Africans like Olaudah Equiano. Also, (what I never realised) the research revealed that it was Africans who were selling other Africans into slavery in the first place, however appallingly racist and inhuman the treatment of slaves once they were on white ships and plantations. And (despite the way the word is often used as synonymous with slavery) under our Empire (as opposed to the unregulated horror of colonial exploitation by individual entrepreneurs buying and selling human beings as cargo) the trade was made illegal and the British Navy actually spent 50 years blockading the slave coast to stop other countries continuing a slave trade that by 1800 had sold 12 million into slavery. Finally, I also derived some satisfaction from the fact that men and women from places like Heacham, Norwich and Lynn were signing anti-slavery petitions as early as the 1770s.


* The CRE was engaged in a completely new initiative at the time - it was part of their work to promote teaching and learning on the Transatlantic Slavery Trade in the school curriculum. My contact was Sharon Walker who read every draft of the present book and continued to advise and encourage me for the 5 years of its composition.
Posted by Gareth Calway at 2:36 pm 2 comments: