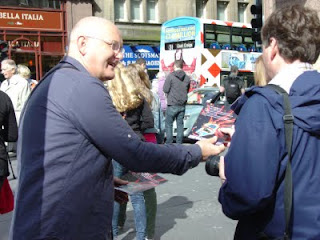 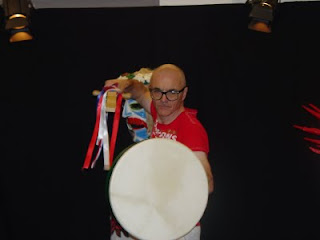 The ref's just looking at his watch as Arthur and Boudicca come up to half time. It's raining - again. I'm beginning to wonder if there are any actual punters in Edinburgh or whether every audience is actually just a collection of performers in other shows temporarily 'resting' from their own sales pitches, showcasing, flyer-ing and performing. If so, what is the collective noun for such an audience. An Eden burgher? Seriously, if anyone who has ever enjoyed any aspect of my work is in Edinburgh this week and wants to see the Arthur show, Saturday is a really good day. The Scotsman is reviewing it and it would be great if she had a big audience around her as she does so.

PS (added later) A very fair review from the Scotsman and three much appreciated stars. A great audience too, some of them such good performers themselves that if I'd known in advance I might have been too scared to go on at all. But I'm very glad I did.
Posted by Gareth Calway at 1:36 pm No comments: