To My Beloved Godson On His Marriage 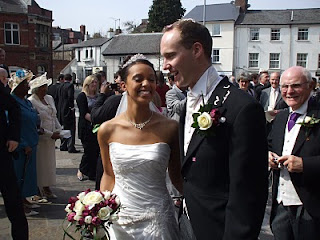 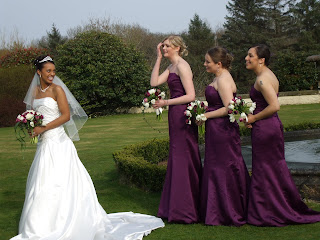 The last time we shared a church occasion,
You were naked and a little bit sloshed,
And had to be carried home by a woman
And fed through a dummy and washed.
Remember your wife is not your mother!
And you will have saddened, stunned and shocked her,
If you mix up your mate with your madonna
Your angel or nurse, she’s only your doctor.
I’ve little knowledge of the married state,
Your funky uncle only married once
And stayed so through the good times and the great
But here for what it’s worth is my advice:
When Love makes an offer you can’t refuse
Embrace it thorn and rose, win as you lose.


Chris and Tanya's big big day April 10. And I mean big. Let them church bells ring out. She's a doctor, his mother's a nurse. As long as he doesn't go into teaching everything should be hunky dory. Seriously though, they're young, they're brilliant, they're utterly head over heels and life stretches before them like a highway of diamonds. Nice day for a...Welsh wedding.
Posted by Gareth Calway at 5:32 pm No comments: 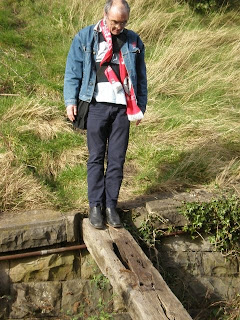 Standing behind the Wedlock goal,
watching the barcodes in soft yellow in the rain
like they don’t want to get their kit dirty
against our red-blooded last-ditch knights
(until we let them back in at 2-1)
my daughter said it was the best game
of football she'd ever seen –
all four goals right in our faces,
smell of the turf, rage of the crowd,
ever-changing, undetached narrative
and the world at stake along the white line
for 90 minutes. Can't beat it.
Then alone by an internet radio for Barnsley,
hearing an early lead crumble to 2-1
and then surge to 5-2, the wish to be there
almost as strong as the old dread
that returns – albeit briefly - at 5-3,
I think ‘we’re staying up then’.
And now behind the goal at Peterborough, from top
to bottom in one week, on terraces
built fifty years before the Taylor report
and a thousand years before civilisation,
remembering nine bleak years in the small time,
recovering from the optical illusion of Maynard
in long shorts and socks rolled up in the warm up
as the red tights of a Prem primadonna,
watching a grey game burst into brief red life,
the players larger than life and closer than TV,
as Clarkson nods, winks and ghost-smiles at Hartley
and points at a spot the Posh can’t see
I say to the stranger next to me: ‘Clarkson to score!’
and he does, like it’s my birthday (which it is)
and like we’re too good for places like this (which we aren’t yet)
and start to dream again. 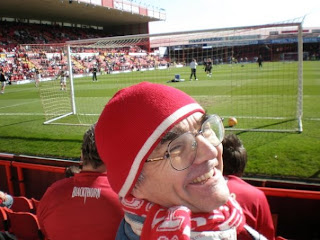 I thought this was the Atyeo?
Posted by Gareth Calway at 8:35 pm No comments: