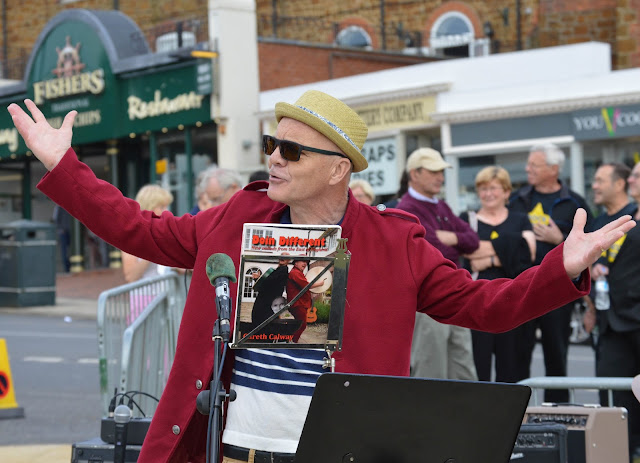 pic by Elaine Bird (Hunstanton Town and Around)

New Ballads from the East of England

Publisher's blurb:
In times past, the ballad was a cracking way to tell a story in verse. History, ghosts, murders, legends, outlaws, love, tragedy. Before the 16th century, such ballads travelled orally; with the coming of the printing press, the number of ballad singers increased as the words and music could travel more efficiently around the country. And here’s the latest collection, written around many tales from Norfolk and the eastern counties.

Doin Different: New Ballads from the East of England is a collection of 39 such stories in verse. Author Gareth Calway compares the oral tradition to the chant of the football crowd and supplies his verses with a mix of musical scores. Where full scores are not available, he gives scripts with chords for the folk musicians who might like to pick up the ballads and spread them through the clubs and festivals around the counties. Even better in this multimedia age, the book supplies a variety of links through to occasions on which the ballads have been performed over the last few months - and places where you can buy them on disc. And the intent is to add in new listings as the words spread round.

The author sees the book as a starting point to a multimedia journey to hear of Boudica and Cromwell, the ghost of the Brown Lady and bingo in Yarmouth – a real mixture of the East Anglian experience over the centuries. From his own background in teaching and latterly as an actor, he has a deep love of the ballad form and whether you’d like to read or to sing the stories, there’s plenty to enjoy in this new book.

The book is in stock in East Anglian bookshops or direct from www.poppyland.co.uk. It can also be ordered at all good bookshops throughout the UK. It  is on sale at Jarrold's, Waterstone's, Hanse House (Lynn), True's Yard (Lynn) or via  http://www.poppyland.co.uk/

Doin Different: New Ballads from the East of England

For a whole album of Doin different ballads in a range of folk/pop/rock/punk styles covering Norfolk characters from Boudicca to Nelson, buy Anto Morra's fabulous CD Boudicca's Country available via www.antomorra.com or at Gamorra* concerts.*Gamorra is the folknword duo Gareth Calway and Anto Morra.

Hanseatic Characters - a play performed at Lynn's Hanse Festival May 2016 - includes a feast of Doin different ballads as written and performed by various artists.

The portal to Poppyland Publishing's Support and Resources for Doin Different

A four minute Gamorra canter through The Ballad of Boudicca; The Night Train To Diss, Yarmouth Visited, Half God Half Nelson and Margery Kempe of Lynn (Lynn Carol)


HISTORICAL FEATURES ON THE BALLADS

Below is a collection of features published in East Anglian journals in recent years giving historical background to the subjects of the ballads. It hopefully provides a kind of ballad-led history of Norfolk and East Anglia.