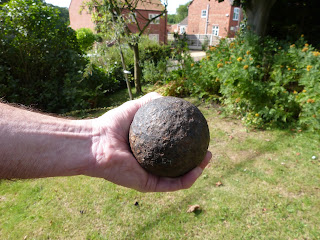 The features below were first published in 2013. On Saturday September 3 2016, at Marriott's Warehouse Upstairs doors open 7 pm, The English Civil War In Lynn and Other Stories  takes the story further.

Lynn historian Dr Paul Richards and local bard Gareth Calway are once again teaming up to deliver a fascinating insight into the history of King's Lynn. Dr Richards will speak about Lynn in the 1620s-1660s and the impact of Puritanism and the Revolution on the town. Gareth's ballads will provide a fresh interpretation of some of the characters involved in the Civil War, as well as other figures linked to King's Lynn, from King John to Fanny Burney. Gareth will be joined by harpist Vanessa Wood Davies and musician Tim Chipping (of Longshoredrift) - who have composed music for many of the ballads and will be peforming alongside him.
Gareth will also be presenting the Marriott's Warehouse Trust with a cannonball from the 1643 siege of Lynn, which was fired from West Lynn during a terrifying three week bombardment! 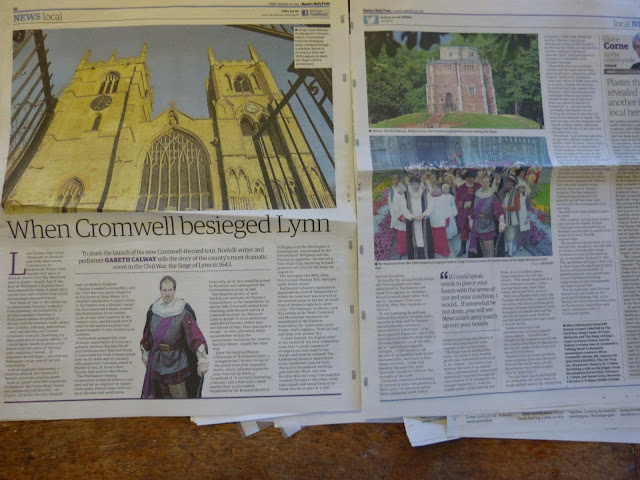 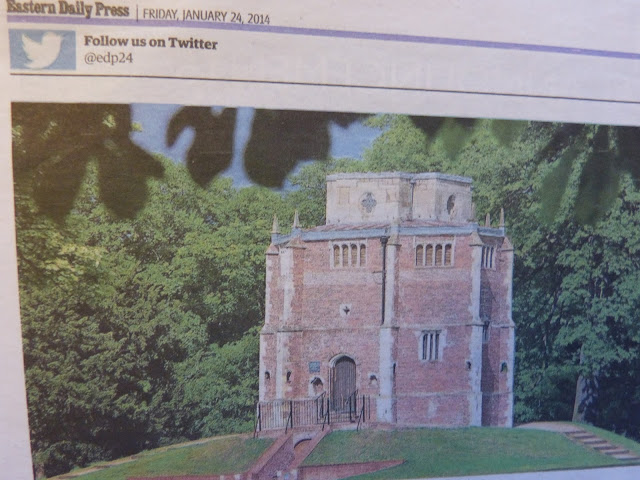 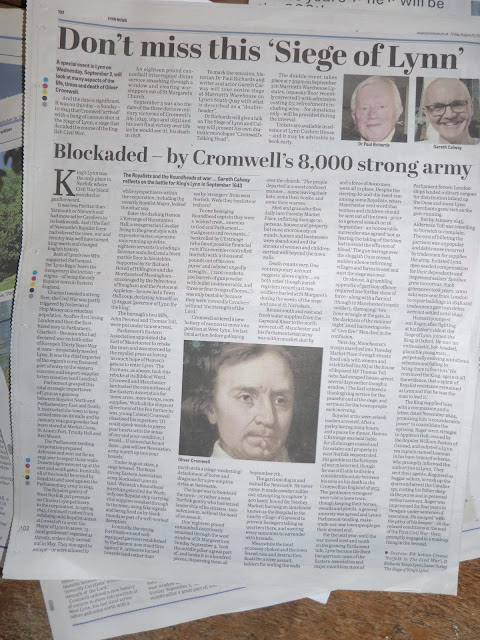 The Lecture: Cavalier and Puritan

In September 1643, along the Lynn waterfront, huge cannon balls and shot took the place of peaceful trade. When we last gave this talk in Lynn on Sep 3, we did so in the very firing line of that siege. To the combatants in 1643, it was a matter of life and death, fought over the banks of the Ouse. Why? What was at stake?
We might call it the advance of history. The advance of Parliamentary government – victorious at Lynn and subsequently in the War of which it was a microcosm, reversed by the Restoration; then confirmed again by the Glorious Revolution of 1688 and completed by all the subsequent Reform Acts. The cavalry charge of the parliamentary future. Against the besieged castle of the royalist past.
We might also call it the Puritan Revolution but all these terms are loaded - by hindsight, and by the memory of radical army activists who briefly flourished in the ferment of civil war, like prophets of the future. The ‘Anglican’ Revolution might be a more accurate term. Mainstream ‘Puritans’ would have seen themselves as conservative defenders of the Elizabethan settlement against an all too ‘cavalier’ Stuartship (stewardship) of it. In their own hearts and minds ‘Puritans’ were resisting a counter-Reformation being sneaked back in through the vestry door by Catholic-leaning Stuart kings and Archbishops, all of them suspected of holding a candle at both ends for the Pope.
These ‘Puritans’ were preserving the Reformation of Oliver Cromwell’s great great grandfather once removed Thomas Cromwell, whose statue-bashing and stained glass-smashing is often blamed (like much else) on Oliver.
So when I use the term ‘Puritan’ don’t Quaker in your boots too much: think Church of England, albeit a Church of England fighting for its very life and for the soul of the country in a war that killed one in four Englishmen. That’s per capita more than both World Wars out together. The bloodiest war in our history, in fact. Almost too horrible for the national memory to recover. Yet still shaping us and our ‘liberal’ constitution: one in which Catholics and nonconformists were not fully citizens until the 19C; in which the last king to rule as a Catholic is still Henry VIII; the last to die as one is Charles II (he converted on his death bed;) where a Catholic Tony Blair still has to leave office before his ‘conversion;’ where the ‘Puritan’ remains a bogey man. Where ‘Cavalier’ is a both glamorously positive noun and a negative adjective (a caddish – flaky - gallant.)


The Ballad of The Backwoods Cavalier (hear this comic ballad live, performed by Lovehearts and Redwine, at True's Yard on Sep 2 and Marriott's Warehouse on Sep 3 2016.)

Hamon L’Estrange of Hunstanton Hall (was) a sexagenarian Cavalier living in the grand style with expensive tastes; expensive sons running up debts; eighteen servants (including a falconer and a fool) and a black marble floor in his stables. …He… led a Town Hall coup, declaring himself, on 13 August – without any mandate whatsoever - ‘governor of Lynn for the king’. The borough’s two MPs, John Percival and Thomas Toll, were put under house arrest.
Hamon’s youngest son Roger, after fighting at his father’s (losing) side at the Siege of Lynn, joined the King at Oxford. He was ‘an enthusiastic, hot-headed, plausible young man… perpetually evolving ambitious schemes and failing to bring them to fruition.’ He convinced the King, against all the evidence, that a spirit of Royalist resistance remained at Lynn and that he was the man to lead it.’  The King supplied him with a commission and a letter, dated November 1644, promising him ‘a considerable power’ to consolidate the uprising. Roger went straight to Appleton Hall, owned by the Royalist William Paston of Oxnead, and enlisted a Lynn sea captain named Leaman in his hare-brained scheme, who promptly shopped him to the authorities in Lynn
Magazine Cottage, Sedgeford, is believed to have been a powder magazine built in 1640 by Hamon L’Estrange, Lord of the Manor of Sedgeford.

We live and die a chevalier’s life,
Have it all and spend even more
On a falconer, fool, on a fowl-mouthed fop’s
Black marble stable floor.

My dad’s the lord of this manor, say I,
And cavalier farmers are we,
Against the odds and facts and slings
Of cowherd reality.
.
From Oxford Town to Norfolk woods
The four winds see me ride
And show my fine letter to a Jack
His poor coat to turn or bribe.

Reviews of the Marriott's Warehouse show 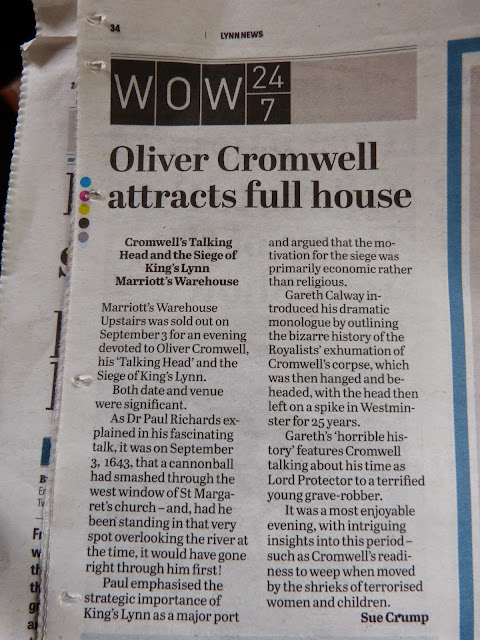 Posted by Gareth Calway at 12:47 pm No comments: