In this much as muchness second division,
Let's consider our position,
Near the end of a season of seeking promotion
We're finally safe from relegation
Posted by Gareth Calway at 5:24 pm No comments:

I've had a busy World Book Week. Setting off for Wessex in my trusty and gracefully aging silver Volvo at 3.50am on Wednesday, I staggered into Upwey at about 10.30am and then walked the last ninety minutes to Weymouth beach. This is the landscape of my childhood summer holidays but more poignantly of pre-student days Chatterton-teethed shivering through a gap year. The coastline was gloriously sunlit across an aquamarine bay - much stronger and warmer colours than I'm used to now on the spartan easterly-blown North Sea washed Norfolk coast. I went into the Hotel Prince Regent where I worked as a relief porter from May-July 1975 and enoyed being waited on instead. Then I finally revisited Abbotsbury Road - the nearest I could get to Abbey Road in those days - finding they had built a road on stilts across Radipole Lake, one of the most beautiful and uniquely wild town centres in Europe. Why not just add a floating car park in the bay? None of the changes that had been made to my old walk from the beach to my illegal one pound a week sub let made any sense. There was even a comedy subway from the pavement over the road to the beach.. to the pavement over the road to the beach. I ran across the road, like Iused to thirty five eyars ago.

Next day was work - five hours in a first school at Milborne telling stories and getting pupils to do the same, in drama and on paper. Beowulf went down so well, assembly was extended so that I could finish it - through luckily I was not doing the full epic ten thousand lines. Lots of little kids wanted to hug me at the end - this does not happen in secondary schools! After that, it was a morning on Cinderella, with groups improving the transformations in ways that only young children can imagine - quite wonderful the world these kids live in. Alas that they cannot stay there until the SATs monster has finally been slaughtered. My favourite Cinderella transformation was the detail of the white horse reverting to a squeaking mouse on the hall floor as the princess legged it without her slipper. This is the kind of subtlety that only a child or a genius would add in the margins of the action. The afternoon was based on my OUP work on Fire, Bed and Bone by Henrietta Branford and these 8-9 year olds (the 'seniors' of this fantastic and close-knit rural school) swiftly adopted the Black Death and the Peasants revolt into their stories told by an animal. I suggested dogs or cats: they came up with squirrels, mice, and -my favourite - 1066 from the point of view of a duck! Their energy was extraordinary and mine of course ran out long before theirs.

Back in the car for a 4 hour drive to Abergavenny - via Bath at the rush hour - and a hospitable stop over at my sister's. We may have had a glass of wine - have I told you this before? - I can't remember. And then of course a glass of wine. Stunning views from a stylish attic room - of the Sugar Loaf, the Skirrid and a Welsh dusk coming down over the tops, mighty and menacing and magical. And did I say we'd had a glass of wine?

Beautiful March morning walk along the Castle Meadows in Aber the next morning with a dog called Speckles feeling like a B side of a famous Lonnie Donegan song and then off again, guided by Sat Nav, to a secondary school in Droitwich, Worcs. Went slightly wrong at the end and nearly drove up Thatchers Way by mistake - would probably have ended up in Mass Unemployment or the Falklands. The school was huge (1600, and 400 in the sixth form) and had the friendly Midlands atmosphere I remembered from West Brom, despite the surveillance camera shot that was taken for my visitors' pass. I noticed that the staff all had passes and mugshots as well! I looked for kids with passes marked Swat or School Bully but didn't see any. I set up for my Tales Out Of School show nervous as always but not as psychotically so as my pre-Edinburgh fringe days. My host, Mr Izod, oozing gravitas and easy ardour, came up with the subtlety of integrating my 'education' set into the typically scruffy sixth form common room itself, thus adding a self-consciousness to the audience as well as to the piece. Nice. I was pleased with the way I made the cane work as a metaphor for 'relentless pressure, pointless league table and perpetual examination' as a development of the 1970s Carrot and Stick Approach to Education - without the Carrot. I had to explain the parrot bearing a identity label "Education, education, education" as the parrotry of exam-driven learning and the white rabbit caught in the headlights which is how I used to feel as a head of department faced with relentless decisions. But it didn't stop them laughing. I am just as furious as I always was about the way "how little that to which alone we give the name of education hath to do with real feeling and just sense" but now I'm managing to get it laughed at. It would be wonderful to get it laughed out of existence but meanwhile, it's better to laugh than to cry. The audience were lovely - sixth formers - lots of them - and bright with it. Young people in the audience always bring energy and openness. I also had some teachers who of course (I think) knew all too well what I was getting at. And I also had a couple of students 'working' at the back throughout whose exams it would be justificable to chat next June! Thanks for joining in, folks!

I built three extracts from the novel into the show and then did a poetry reading/ novel reading version of the above - mostly using different extracts - for an after school Friday cake and culture spot in the staff room. It was a good laugh and I sold a couple of books. One interesting insight - audiences listen to novel extracts/ stories with heads cocked on one side and their eyes allowed to wander into their own self-created worlds. It is a subtle and restful engagement - not the eyeballed and grabbed broader-stroked engagement of one man theatre - and even kids don't get enough stories told them these days. Adults never do and it's a pleasant feeling when it happens. I still enjoy the bolder buzz of the theatre though. Whether I can continue to pursue both modes at ocne remains to be seen.

After this, I was invited to play 5 a side staff football on the asphalt and won't bore you with the details. Except to say, they had an ex-Villa player and I scored two goals (the first with my left foot), hit a post, cleared three goals off the line and chinned a 'low and hard' corner from under my own posts out to safety with minimal damage to my jaw. I also gave the ball away in midfield once, a mistake that ultimately led to a conceded goal but none of team mates mentioned it, while giving lots of praise for the rest. As I say, mere details and not worthy of inclusion in this literary blog.

An evening a cordon bleu, wine cellar red and a brace of brown Worcester Broadside Ale (in Mr Izod's cheery local) followed. Then rigor mortis from the football set in. How I managed to drive back early Saturday morning remains a mystery.

I left my mobile phone in Weymouth, my washbag in Wales, my wig (and several other props and papers, my cheques and cash, pants and socks) in Worcester and my heart in all three. A big thank you to all my hosts.
Posted by Gareth Calway at 8:17 am No comments: 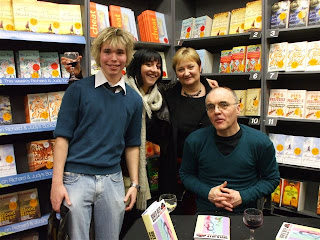 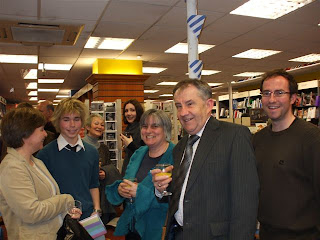 Posted by Gareth Calway at 11:19 am No comments: