'Born before your time
It would take an eternity
To redress their abyss,
Skirting heresy.

'They would fetter your soul
With wedlock-maternity,
Apron and stain,
Skirting heresy.

'You fore-saw what the spirit
Of a woman could be
And clothed your flesh in it,
Skirting heresy.'

'In the arms of your soul
You may take me as boldly
As a good wife her spouse,'
Skirting heresy.

The sun of love in your heart
Burns so hot and fiercely
It scares you to life,
Skirting heresy.

'This vestment of heat
Is the heat of the Holy.
It will burn away your sins,'
Skirting heresy.

Magic water, magic sky,
What land appears to be,
Shift across your vision -
Skirting heresy.

Chat to God without a priest;
As His Mother in Galilee,
Nurse and feed Him like a Babe,
Skirting heresy,

In the dance of the Hansa,
Out of step, off the quay,
Walk on water like the sun,
Skirting heresy.

The Lord Jesus spoke to me like a Song in my heart:
Though a menace to churchmen, you’re a mystic to me,
There is none so pure as the mother who gives
This world to so many and her soul to me. 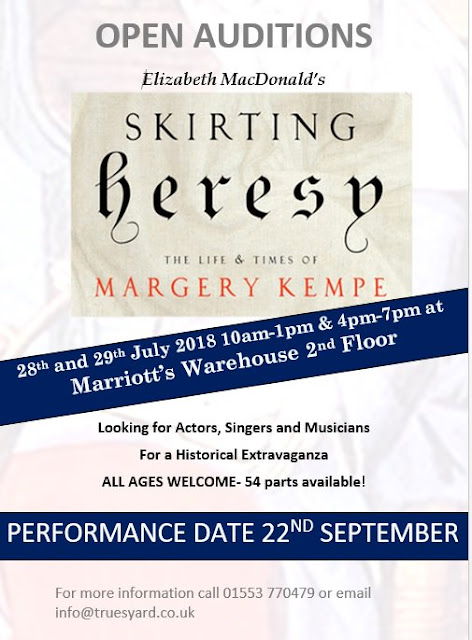 New York playwright Liz Macdonald's play about Margery Kempe of Lynn plays Lynn Minster, Margery's own beloved parish church, on Sep 22 2018. It has 54 roles including a young Margery, an older one, England's first proto-Protestant martyr (William Sawtrey late of this parish) and King Henry IV (part 1). This is such an exciting prospect.

It also has a suite of songs for which I'm delighted to have written the lyrics. An album of these and several others about Margery's life and times has been recorded by the Penland Phezants. The lyrics of the title track of the album (which is not in the show but has a special place on the album as a tribute to the author, her title and her subject) are printed below, along with a typically captivating extract from Margery's Book and some notes about her. This song will have its premiere at a special fund-raising concert for the project as part of Heritage Day at Hanse House on Sep 16 2018.


"Our Lord also gave her another token that lasted about 16 more years and increased ever more and more, and that was a flame of fire of love - marvellously hot and delectable and very comforting, never diminishing but ever increasing, for though the weather were never so cold she felt the heart burning in her breast and at her heart, as veritably as a man would feel the material fire if he put his hand or finger into it.
When she first felt the fire of love burning in her breast she was afraid of it, and then Our Lord answered in her mind and said, "Daughter, don’t be afraid because this heat is the heat of the Holy Ghost, which will burn away all your sins, for the fire of love quenches all sins."  (Ch. 35)…

"At last the Archbishop (of York) came into the chapel with his clerics, and he said to her abruptly "Why do you go about in white clothes? Are you a virgin?
She, kneeling before him, said, "No, sir, I am no virgin. I am a married woman."
He ordered his household to fetch a pair of fetters and said she would be fettered, for she was a false heretic, and then she said, "I am no heretic, nor shall you prove me one."
The Archbishop went away and left her standing alone. Then for a long time she said her prayers to Lord God Almighty to help her and succour her against all her enemies both spiritual and bodily, and her flesh trembled and quaked amazingly, so that she was glad to put her hands under her clothes so that it should not be noticed." (ch 52)
from "The Book of Margery Kempe", the first autobiography in English. c 1441

The Dean of Norwich Cathedral asked in 1996 was Margery Kempe mystic or menace and, like the Archbishop in 1417, concluded (with perceived Norwich bias) menace. She was born in 1373 - the year Julian of Norwich was offering her visions of certainty and comfort amidst a crisis of Faith - into a England riven with the Black Death and about to experience the Peasants' Revolt. Her birthplace Lynn had been a thriving port only since Brandon Creek re-routed the Ouse to flow out there a hundred years before but was now one of the premier ports of Hanseatic Europe. Her father John Brunham, 5 times Lynn mayor and twice MP, was its leading merchant, exporting cloth (& importing pitch, wax, timber, fish and wine) but in the 1390s, as Margery married a Lynn burgess and began her family of 14 children, the English wool industry slumped. Her traumatic first pregnancy and birth caused a mental breakdown and lifelong visions of heaven and hell. She was a great frequenter of monks and clerics, holy men and women and anchorites like the one in the cell at All Saints Church, Lynn and Mother Julian in Norwich and was much attracted to such world-renouncing people but did not join them. She had grown up as a merchant's daughter on the teeming Lynn waterfront - as a young married woman had run four Lynn (ale) pubs. After raising her family, she spent years travelling and pilgrimaging out in the world, often without the required husband's written permission or confessor's licence, incurring the wrath of archbishops and others for her holy shrieking through sermons and Masses at any mention of Jesus' suffering and for loud and sustained criticism of the church patriarchy's spiritual shortcomings. Yet she was also very soft-hearted, weeping at the sight of lepers (whom she embraced) and easily hurt by gossip and criticism, so the frequent risk she ran of being burned on a heretic's bonfire is testament to a faith well beyond her personal disposition.
Posted by Gareth Calway at 6:07 pm No comments: 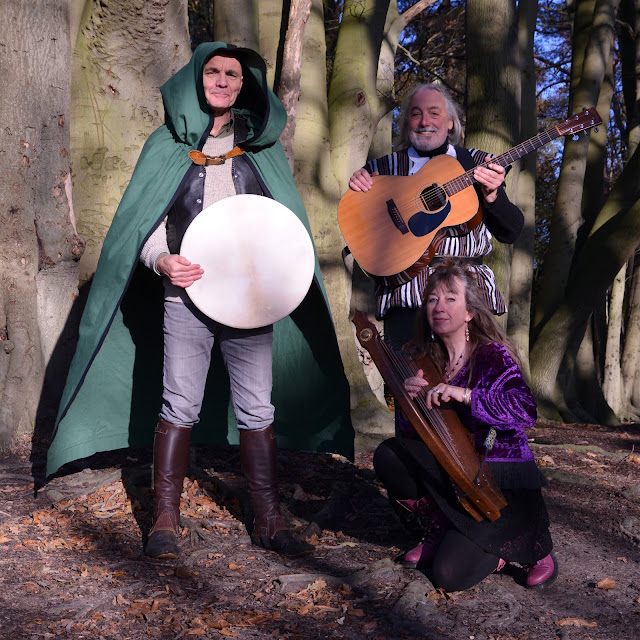 Fenland storytelling combo the Penland Phezants are conjuring up the spirit of '66 as their Hereward the Wake tour comes to All Saints Church Fring (9 July) and the Ely Folk Festival (July 14) next week.

That's 1066 and the English defeat at Hastings, folks, not the 1966 victory at Wembley, but there are hopeful parallels across (almost) a thousand years.

Herwardi Saxonis (Hereward the Saxon)  - 'Vardy' for short - is the original English underdog who won his day, in the wake of a crushing English defeat that seemed like the end of the world at the time.

As every English schoolchild knows, after an exhausting victory at Stamford Bridge in 1066, King Harold, the last Saxon king of England, fought bravely and his defenders were well on top at Hastings until tactically outwitted.  Harold's Saxons thought they had won the game when the Norman French dropped deep into their own half only to be caught by a devastating counter attack. A speculative arrow through the air into the penalty area hit Harold in the eye and the rest (including Saxon England as we knew it) is history. 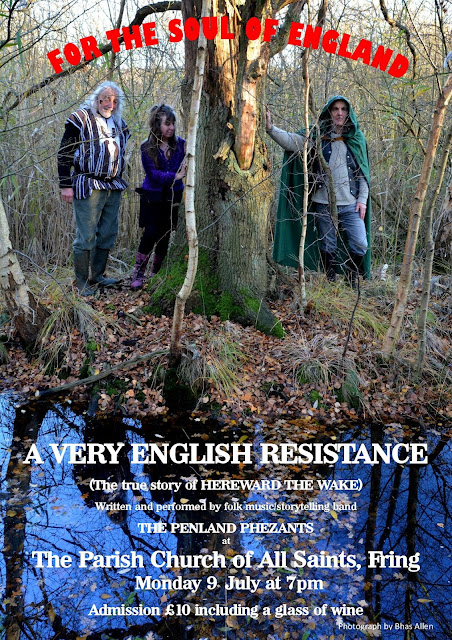 Hereward (of Bourne in Lincolnshire) was in Belgium at the time - adding to his international reputation as a brilliant mercenary general - but returned in September 1067 to join and swiftly to lead the growing English resistance to William the Conqueror's harrowing invasion. Hereward did so most famously at Ely, leading a solid defensive formation of mighty Saxon warriors and monks and Danish diehards, all secure in local knowledge and the impregnable native fen and forest, soaking up wave after wave of attack on a waterlogged fenland pitch, then catching those offensive Normans napping on the break. Not even the services of a French witch deployed on a wooden tower could shift Hereward and his men from their fastness and the Conqueror was losing heavily and on the verge of giving up when, alas, the Abbot of Ely betrayed the secret paths through the fens to the invaders.

One loyal monk warned Hereward just in time and the great Saxon hero escaped with his men to fight (and win) many another day - in a series of madcap adventures in the greenwoods of Lincolnshire, Cambridgeshire and Warwickshire, and at Peterborough Abbey, many of which are the real originals of Robin Hood legend.

The 'overdog' Norman conquerors brought many positives into English culture but love of the underdog was not one of them. Our  enduring love of an underdog defying the odds plus the sturdy survival of English rather than Norman French as our national language can both be traced to Hereward's timely resistance.

The Penland Phezants  90 minute musical show "A Very English Resistance: The True Story of Hereward the Wake" words written and narrated by poet Gareth Calway, music by Andy Wall and Vanessa Wood Davies, the whole performed by the trio on guitar, harp and drum, plays Fring and Ely Folk Festival as the World Cup enters its Final week. If France and England are still contenders by then, it might make an interesting replay! 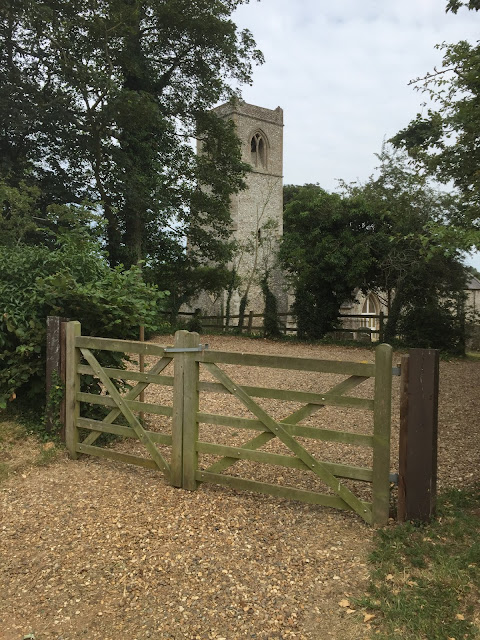 Posted by Gareth Calway at 7:52 pm No comments: