Can You See Me?

Bard on tour. The next three appearances:

North Creake Village Hall
Date: 7.30pm, Friday 15th December
Venue: North Creake Village Hall, where the music & poetry group meets once a month (Map).
Show: "Norfolk Carol" (a modern nativity poem from "Exile In His Own Coutnry" as part of the village celebration). I can't remember whether North Creake or South Creake is the Communist one, but I do remember the people there are the friendliest and most erudite on God's earth.

Posted by Gareth Calway at 10:31 am No comments: 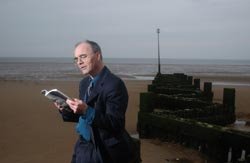 This article is reproduced courtesy of SecEd. You can view the article at their website, here.

A teacher and published poet is marking national poetry week with a series of workshops. Gareth Calway, head of English and media at Smithdon High School in Norfolk, has been touring the nation’s schools for much of the year hosting poetry workshops in schools and promoting his seventh publication Exile In His Own Country.

The book is a selection of new poems, including one on an Ofsted inspection, which carries the lines: “Wesley won’t shut up of course. He never shuts up. I thought that this week that just for once he would shut up. I hear myself pleading, wheedling, whingeing.”

Gareth’s workshops are based on the football and schooldays sections of his latest book. The football section includes getting pupils to write about their sports dreams coming true, as well as looking at Greek tragic Chorus, African call and response chants, the roots of poetry from both thousands of years ago and on today’s football terraces.

The schooldays workshop begins with Gareth’s writing about the “monsters” who taught him, and goes on to explore the thin line between realistic comedy/characterisation through judicious hyperbole and the limits of this in daft over-exaggeration, sacrificing reality for (unconvincing) comedy.

This week is National Poetry Week, and to mark the occasion Gareth is today (October 5) visiting Alderman Peel High School in Norfolk for a workshop and has been doing a number of workshops in his own school all week.

Asked why poetry is important in a child’s education, Gareth said: “The English teacher should be the champion of poetry and is all too often its worst enemy, partly because such teachers have been pursued with the stick of measurable results, league tables, and exams for so long, and partly because English teachers are sadly often frightened of it.

“Poetry isn’t like that. It defies formulas and judgements. It is subjective, personal, profound, life-enhancing and fun. It is the joy of language – as music, gut-feeling, pattern, art, play and mischief as much as semantics, and much more than most exam answers.”

Gareth, who is the offical poet laureate of Bristol City Football Club, has also been confirmed as “poet in residence” at the National Association for the Teaching of English Easter conference next year at the University of Manchester, where he will be doing workshops and seminars on poetry and sport. Schools can request Gareth to stop by with his workshops. For details, visit www.garethcalway.co.uk
Posted by Gareth Calway at 10:01 am No comments:

October Poem Of The Month

to eyes trained on histrionic heights

Poem Notes: This was when Octobers were a lot colder, children. The Rialto published this in the early 90s. It was originally written for the King's Lynn Festival in the summer of 1993 - an evening called "Poems and Places" - where I shared the billing with the uniformly excellent Alan Brownjohn, Kevin Crossley Holland and Paul Berry. They, like so many other poets, all live round these here parts and all continue to do sterling and likeable work. As I have a busy month or so finishing off my Exile tour in Wells, Wiveton and West Acre (along with workshops in my own school) I thought I'd choose a very local Norfolk poem from the new book to announce it. It will probably be a lot colder by the time I get to West Acre on Friday November 3 - but these days you never know.
Posted by Gareth Calway at 11:30 am No comments: