Review Of The Exile Show 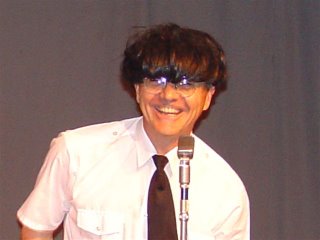 A Review of Gareth Calway Exile In His Own Country – The Drill Hall, Chepstow 22nd July 2006

Something odd happened in Chepstow on Saturday and I'm quite sure that the audience at The Drill Hall will never forget it. When I was at school, one of the highlights was the annual visit of the piano tuner, who unusually was deaf rather than getting the job via the then Government's sponsored 'Jobs for the Blind' initiative. Luckily for the appreciative audience on Saturday night, where Gareth Calway's one-man-tour had landed after visiting Bristol earlier in the day, Calway's recollection of his school-days is a lot funnier than my own and certainly not as off-key.
For those of you that don't know, Gareth Calway is a serious, high quality poet, but before you switch off expecting a pseudo-intellectual discussion of a dry poetry reading by a refugee from a 1970s Open University program, his approach is a little different to most.

Little, as in worlds apart.

Whilst his work stands up against the best on paper (his Exile In His Own Country tour is currently promoting his new book of the same name,) it is when you see him perform the work in a live setting that it truly comes to life.

To paraphrase Dervla Kiwan in her famous M&S adverts, this isn't just poetry, this is the finest hickory smoked, pine nut scattered verse-on-the-vine. This isn't just boring old fashioned classical da-di-da-di-da poetry, this is poetry that is about real lives, that is meant to be read by real people and has all that hear it nodding in recognition at its basic truths. This isn't just another detached academic discussing the ancient Greeks and the Roman gladiators, this is a football fan showing us exactly what it feels like to stand on the terraces in the near certainty that he will ultimately be disappointed, this is a music lover growing-up and then feeling discarded by his bedroom poster heroes to a soundtrack of the Beatles and the Stones, and this isn't the poorly recollected days of your own piano tuner, this is an acute eye detailing exactly what it was like to grow-up under the watchful gaze of teachers who were still allowed to bare their teeth and playtimes spent firing wooden guns and lobbing imaginary grenades.

But what of the show? Well, Calway's approach encompasses all of these things as he takes you on a whistle-stop journey from his schooldays in Wales, his exile in Bristol where he became the Official Poet Laureate of Bristol City - and given the attendance of the club's smiling Chairman, I would imagine he will continue to be so for a while longer - up to the modern, where as a teacher in Norfolk, the current reality of OFSTED and government interference provides a telling contrast to what had come before and the circle is truly squared.

All of this and much more is put across in an highly entertaining way to a lively Rock 'n' Roll soundtrack, without ever descending into amateur dramatic farce or stilted self-consciousness. Calway does what many see as impossible, he makes poetry accessible without 'dumbing down' and he tells it like it is without ever feeling the need to preach. It is an approach that should please all but the most elitist poetry lover and would give a couple of hours genuine enjoyment to young and old alike. In summary, highly recommended and if there are any TV executives reading this, you could, and often manage to, do a lot worse on a Saturday night.

Wow! Thanks Erik. It's rather flattering to be reviewed by the autbor of a proper grown up modern SCARY novel like "God's Game." (which incidentally I found and continue to find inspiring as an example of the novelist's art- a genuinely successful fusion of literature and rock, like William Blake on acid, or maybe just William Blake). Like you are generous enough to say about my work, I think God's Game encourages Literature to be a bit less stuffy and up itself while (and this is vital) retaining ral literary values. I'm really glad you were in the audience at Chepstow and if I'd known you might be there to write a review would certainly have fluffed the whole thing with a response like this at stake!
The next Exile show - and the last for a while - is this Friday July 28 at The Granary Theatre, Wells Next the Sea in Norfolk. Norfolk and good!!! Let's hope so anyway...