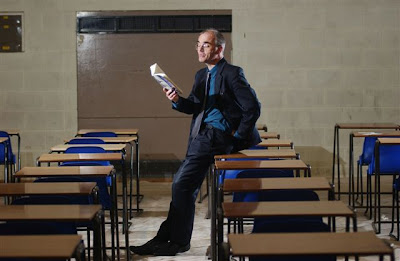 Press cutting from the TES

Is there poetry in football songs? Gareth Calway, head of English at Smithdon high in Hunstanton, Norfolk, and official poet of Bristol City FC, thinks so.
The ritual of chant and counter-chant is a "beautiful example of the poetic craft", says Mr Calway, who last year recreated the intensity of the terraces in a series of lessons.

Some might question the poetry in "We are the boys in red and white/We love to drink and love to fight", or "We love you city, we do" - but not this supporter, it seems.

The centrepiece was a CD he played of a Bristol City song, in which the fans let their opponents know where they are from and then, not very gently, mock their arch rivals, Bristol Rovers.

Some sections of the following extract have to be handled with care in the classroom. The chant runs: "Everywhere we go/People want to know/Who we are/Where we're from/We are from Bristol/Bristol City/ We are the boys in red and white/Love to drink and love to fight.

The class is then invited to devise its own, slightly sanitised, version, with "love to drink and fight" replaced with "love to do our work all night", and with another local school replacing Rovers, which they then sing.

Mr Calway used the football songs in a lesson also covering traditional African hunting chants and the poetry of the Bible. It finished with pupils writing their own verse on a subject of their choice but using the rhythmic structure of the football anthems.

Mr Calway believes football matchday rituals follow in a long tradition of oral poetry, dating back to the choruses that formed the backdrop to ancient Greek theatre.

"The pupils love the lesson," he said. "I also use drums and old football rattles to add to the atmosphere in the classroom. I even said the aim was to get complaints from other classes about the noise. Actually we didn't have any. Some of the boys I taught really wanted to learn. Some stayed behind to talk about the structure of a chant they had heard at Norwich City, writing it down and then trying to learn it."

Mr Calway will be presenting a workshop on the "poetry of sport", which will also look at the lyricism of recent writing on cricket, at the National Association for the Teaching of English's annual conference in Manchester on April 1 and 2.