Bristol slip: Calway out for rest of season? 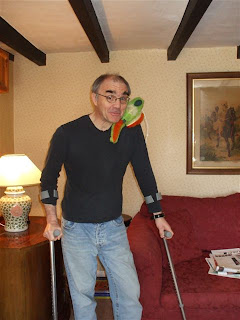 Well, I didn't expect this. I’m out of action for 2-5 weeks following a ludicrous injury sustained on the way to the Bristol City v Wolves game on Saturday. Just as I was looking forward to some R & R after all my recent lather of activity, I get A & E!

My pre-match ritual has always involved climbing over a fence near the Bristol CREATE centre and then cutting down onto the old railway line into Ashton park. This will now cease - my boyhood is finally over - as my little 1970s shimmy down a steep sleeper onto the track ended at 2.45 on Saturday. with a rupture of rather a lot of calf muscles and four hours in the Bristol Royal Infirmary A&E. By the time I was seen, Casualty was being shown on the tv and was simultaneously happening in real life, cops and all, all around me. For one very bad half hour about eight pm - Handcock's Half Hour - a hospital admission was mentioned and I was metaphorically wetting myself in preparation for an op followed by exposure to all those bugs they give you in hospital these days. Luckily the X ray treatment worked.

I have one normal leg and one very solid balloon for the other. However, I am British and Christian ( as elicited by the receptionist clerk) so I will survive. My stock went up in the waiting room considerably as soon as I came back out in a wheelchair and minus my trousers for the backwards trip down to radiology. Not my best side, I said, as the guy took his radioactive snaps. (One leg - the Welsh one - being twice the size of the other.) For a few moments I felt like my hero Chris Garland (or maybe Judy Garland), injured in 1978, and who I met in Newport of all places last Thursday. Chris still has that winner's sharpness and mentality Bristol City will need (along with a big new ground and some big game strikers) to go up and stay up. Meanwhile, it's bed rest and boredom for the Bard.

If any of you are expecting me over the next 2-5 weeks, it’s probably not going to happen. I hope forlornly to be at the Preston game to see City go up but, as with last season, this glorious day may have to happen in my absence. Freud would say I secretly don’t want to go ("There are no accidents").

I'm probably more likely to score than the City forwards even in this state at the moment. Back at my B&B, a man dying of cancer helped me up the two flights of stairs and a wannabe writer standing behind me at death's door shared a few kind words to help pull me through. I was in a 'comfortable and stable position' ie lying on the floor like a dead cow for the longest Saturday night. However, I was chauffeur driven all the way home next day and now it’s just the doctor, the frozen peas, the physiotherapy, the elevation, the constipating ubiquitous analgesia, the agonised wondering about the route not taken... 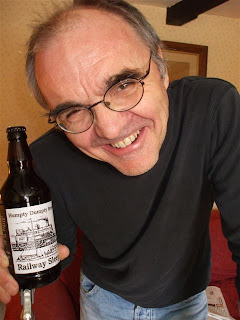 Posted by Gareth Calway at 7:20 am