Welcome to the Café Abersychano 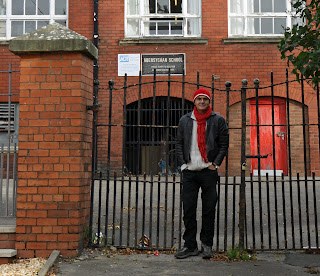 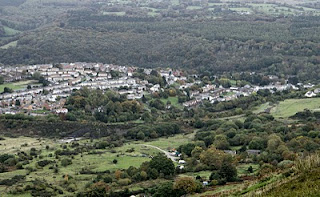 These superb photos capture two Abersychano Grammar Technical School old boyos now in their own mid Fifties reliving on a beguiling October day in 2010 their schooldays in the late Sixties and early Seventies in the valleys. One of them happens to be me, silver-haired, coal-jacketed bard in exile; the other (the photographer, pictured at the end, also a confirmed expatriate with roots still deep in valley) is Kevin Fackrell. We were both in 2X in 1968. Then in the third year (now Year 9) Kevin took the Tech route; I went the Grammar way: not to the everlasting bonfire – at least not yet – but to an early retirement from our nine to five careers and with it the heaven of taking a day out of time like this. Through the old wrought iron heaven and hell gate behind me (now disused) you can see the old coal hole and above the window where Mr Padfield, the Headmaster, used to spy on any late arrivals, smokers, truants, boy-girl couplings and other miscreants. Almost by accident, Kevin captured some images of our adolescence amid a mighty Welsh industrial revolution that was once felt from the USA to the USSR, that was getting to be a spent force even in as we reached 13 in 1968 and which is now, in the remote valley pictured - once the clanging, winding, bustling, steam-trained, demon-frenzied, coal-driven, Satanic-milling locale of the Blaensychan, Tirpentwys and British pits - surely the finest living outdoor museum in the world. This valley and mountaintop strides purposefully – as did we – from Craig Ddu to Talywaun. I was staying in Bristol, eating in Clifton and had been at the Cheltenham Festival of Literature the day before so – used to the seven choices of coffee now de rigeur - blithely ordered a Café Americano with hot milk at the local café while local builders tucked into sausages the size of horses’ appendages, causing waitress panic and a referral to the manageress, before receiving, ultimately, a Café Abersychano. There were two options on the chalked board: Instant Coffee and Instant Milky Coffee. Ninepence and a shilling and Instant Karma at number two. Kevin went for the milk, now forever to be remembered as ‘Latté Abersychano.’ It was a long, mountainous, exhausting but exhilarating day. And it seemed to last about fifty years. Because of course it did. 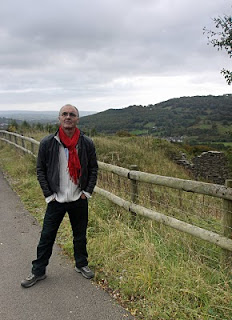 Posted by Gareth Calway at 7:36 am