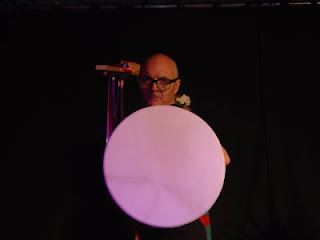 King Arthur (One Man and His Masks Part 2) Rides Out - and more sure footedly than a world premiére might though I have been preparing it since March 2010. Holt Festival is a very good place to be: securely organised, energetic and with lots of sell out houses and I believe I was the first act of its Ubergrandanonium. King Arthur to the fore as always. The long applause at the end and even a whistle (this is becoming a trend and I'm all for it) made brave music in my ears. Norfolk audiences, as I know from my years in the Sedgeford pantomime, often give no indication whatsoever of what they're feeling throughout a show but then thunder out their approval at the end. So my heart was in my mouth for much of this but it's beating as a steady as an Arthurian gallop now, ready for anything - even the Edinburgh fringe.
Posted by Gareth Calway at 12:59 pm