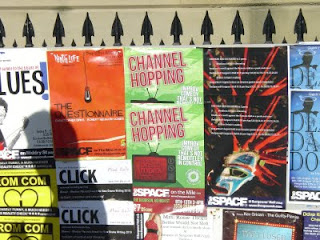 After twenty nine days at the Edinburgh Fringe, treading cobbles in the rain to granite cellars to watch more shows in one day than I’ve seen in the previous year, while performing two shows of my own, I’m back to gentle Norfolk sunshine.
My chief impression is that ‘Fringe’ no longer describes it. Mainstream stand up by people off the telly, pantomimes, children’s shows, safe reassuring comedy are the shows that bring in the coach-load audiences blocking up the elegant narrow genteel streets. Alternative comedy and challenging theatre is everywhere but most of it attracts the kind of audiences that ensure the Fringe average stabilises at three. The alternative New York underground legend Lach - a countercultural mid evening show and witching hours cellar cabaret – is critically acclaimed as the essence of Fringe but played to more empty seats than walked out of some of the larger commercial promotions. Empty vessels make the most noise? And even then the group of brainless drunks who had their photo taken with Big brother ‘star’ Pete, outside before talking loudly through the first twenty minutes of Lach’s heartwarming and kooky show had to be given the option of pursuing their quest of vacuous celebrity elsewhere by Lach himself. ‘I’ll turn my back and if you’ve attended by mistake you can disappear’ – which they duly did to relieved applause from the rest of the house. ‘They were sucking my energy, man.’ The audience’s too.
I saw a physical theatre production of Steven Berkhoff’s Agamemnon that was so stunningly good I attended it twice. Twice more than the reviewer who arrived late, fell distractingly asleep in front of me, and then left after twenty minutes. The cramped venue ensured that all of the work the performers did at floor level was not seen by anyone further away than the front row – and, if they were that reviewer, not even by them – but everything about this production was fresh, vibrant, starry, young, brilliantly new: the kind of multi arts and innovative experience the Fringe should foster. It was well supported but hardly registered in a city devoted to celebrity reruns – not to mention shambolic imitations - of what audiences already see on TV all the time.
The star system the reviewers use can make or break you at the box office but it lacks any objective criteria – witness shows that get one star in the Scotsman and Three Weeks and four stars from some of the sixth form publications. That wouldn’t happen at A level: or let’s hope not. If the performer is famous, and therefore the house is full, there are already stars in the reviewers’ eyes. More worryingly, ‘weird’ seems to be a reviewer negative – is this the Fringe or Top of the Pops? - and among all the thousands of mega-bankrolled advertising campaigns fronting the big shows and the modest ones fronting the little shows, I read of one obscure one man effort that got hammered as ‘an exercise in self-publicity!’
Henry the Hoover and Friends was genuine kooky comedy and Shakespeare’s Monkeys combined joyously skilful Shakespearean acting with a two woman audience-interactive politically incorrect stand up which debunked everything from celebrity cookery programmes to Dame Judy preciousness (no offence to the real Judy)– the use of spoons instead of daggers for Macbeth a moment of comic heaven – in a way that would have had the Bard himself chortling with joie de vivre. Significantly, both of these were part of the Free Fringe and this may well be the future of the Fringe spirit (though apparently the Scotsman doesn’t review the Free stuff). Money corrupts and it also corporatizes. It’s a bit like punk rock – what started as a shocking deconstruction of culture has become, through audience demand and promoter control, a sentimental replay of reassuring Punk Hits.
Posted by Gareth Calway at 7:36 am

What a wonderful, insightful blog, Gareth, and thanks for mentioning Shakespeare's Monkeys! They are competing in the Funny Women quarter finals at the Leicester Square Theatre tonight! Here's the link for more info:http://www.facebook.com/event.php?eid=100594633382080

Attention, fun lovers! Hey hey they're Shakespeare's Monkeys Don't miss the chance to see this gem from the Fringe in Funny Women at the Leicester Square Theatre tonight. You'll laugh until you wet yourself.