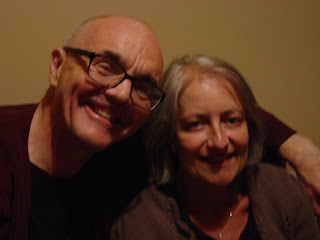 
We're not the teen-dream lovers of the songs
And films n’ soaps n’ mills n' boons n’ ads,
The 'hunters' living with their mums and dads,
The twenty-something dramas, dinging-dongs,
The sizzling catalogues of straps and thongs,
The Darcys, Juliets and golden lads
In modern strip from tales in which the cads
Are fifty-odd like us and cause all wrongs.

Our story didn't end like these above
In frozen celebrations, wedding-deaths;
We've raised a daughter into Now and Next,
We're grownups grown together, more or less,
Our romance is a realistic text:
A dangerous, married, grail-quest of true love.

Notes: If I hadn't been so happily married, I would probably have written much better poems about it. It's a bit like being the 'official' poet of something. You write worthily and triumphantly but not with the aching heart that Yeats tells us creates a changeless work of art. It's a bothersome thought that most of the masterpieces come out of suffering the pangs of love rather than enjoying a 32nd anniversary dinner: the Taj Mahal, almost every pop song worthy of the name (Hendrix's 50th Anniversary, all of Elvis Costello, Sinatra's torch songs for Ava Gardner, Lennon's 'Girl' rather than his mature - and soppy - 'Woman' etc), Romeo and Juliet, Leila and Majnu, Lancelot and Guinevere, Paradise Lost Books 1 and 2, Inferno (which for all its doom beats Paradiso as a work of art every time). Our culture is much better at visions of hell and purgatory than heaven. That's what's wrong with it. Luckily as far as my own creative work is concerned I have the twenty three years before marrying Melanie and most of what happened at work after doing so to provide the spur to the Pegasus flank and fly. All that said, this effort, my favourite from an annual anniversary sequence abandoned at 50, conveys something of the ongoing spur of marriage. After all, as a Sikh once told me on a train to Mumbai, marriage is not the wedding or the honeymoon or even the next 32 years: it's the work of a lifetime.
Posted by Gareth Calway at 7:55 am

Congratulations. Such longevity in a relationship of any kind is rare these days. You mentioned that people find tragedy easier to write about like Romeo and Juliet but maybe you are the Waltons of the married population. I have also found myself that as you get older, you are more willing to compromise and accept that neither you or your partner are perfect. Heres to many more years of happiness for you both

Thank you so much for this poem, much appreciated by one who is now clocking up 25 years and happy! I know what you are saying about the best art coming out of suffering, yet isn't it time that we learnt to celebrate joy with the same heart? Hafiz, for one, is also good at joy.
As for me personally, I recently went to a concert where Vivaldi's Four Seasons were rendered with the most extraordinary spirit of joy, which made the too well-known music seem new at each bar. I was weeping and murmured to Alan: "This is all about JOY!" I think there is much of it in baroque music, in equal measure with suffering and longing.
It is romanticism which upset the balance in favour of angst, pain etc.
After so many years of struggle in my life, I feel it is now time for joy.


May I wish you the same!


Love and congratulations to you both