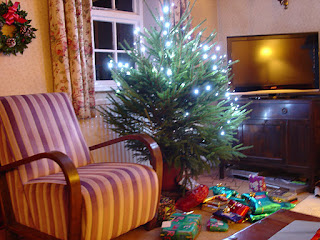 Christmas morning 1963. The Spectre children have hardly slept. After hours tossing and turning, pretending they are waiting to catch Dad as Santa but really just aching for it to be Christmas morning, they peer around the door of the small living room, its neatly wallpapered surfaces and soberly plastered ceiling a magical garden of decorations. There is the scent of earth and pine. The presents are piled up under the tree like fairytale treasure. The lights on the tree radiate happiness so intense it hurts.

Note and quiz question: this is from a just-about ready new novel about the Sixties where Christmases during the decade get revisited. The Fab Force was mainly at Christmas No. 1 in the album charts 1963-1969. But their signature album Sergeant Pepper was actually replaced at the top by an LP that competed for the top spot with every Beatle album from Beatles For Sale (which came out in 1964) to The Beatles (White album, which came out in 1968) and which is therefore arguably a rival as period soundtrack. What was it? Let me know via the comment box. I think you'll be surprised. Clue High on the hill...?
Posted by Gareth Calway at 10:13 am

I suspect it won’t be one of my favourite things….

A long long way to run with this one. Time for a drink with tea and bread?

No problem for me (a name I call myself)…..enough!