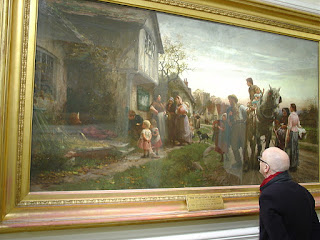 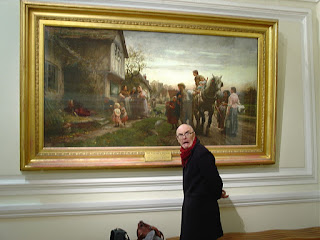 Photos taken by Donna Calway aged five of Frome. No, hang on, that was a hundred years ago. We're both in our fifties now. The painting is in City Hall, Cardiff, the most magnificent building in Wales and quite possibly Europe or the Universe. Built when Wales was coal-rich and Victorian mighty in a style that sort of combined the French of our diminished Enlightenment rivals with the opulent glory of our Indian Jewel in the Crown. Plus a bit of Gothic in there too just to remind the Germans who was boss. And lots of white and ivory. And washed by a century of soft, refreshing Welsh rain. And inside, free to anyone who wants to pop in, a set of Welsh national treasures including a series of white marble statues of Welsh greats - notably a glorious white marble BUDDUG queen of the Iceni which is Norfolk (!) - no statue there though - and this painting of a reprobate's return which the little sister has expertly framed me into.
Posted by Gareth Calway at 7:48 am