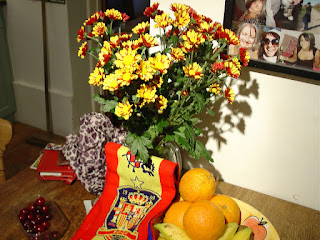 1. The Lucy Poems. Wordsworth. Poems that lament the death of a girl Wordsworth loved, 'But she is in her grave and oh/ The difference to me.' Perfect, profound simplicity. They have everything, even the romance Wordsworth doesn’t often share with the Byron generation. Published in Lyrical Ballads, 1798, and the Lucy Poems really are: a revolutionary combination of lyrical and ballad. She was all the lovelier and vividly present for being elusive, quiet. He compares her to 'a violet by a mossy stone/ half hidden from the eye.'
2. A Nocturnal On St Lucy’s Day by John Donne. Complex and deliciously devious where my No. 1 is simple and direct but if you want poetry that f***s with your head, this is the way to do it. It’s not just a counter-language, it’s a counter-culture. And the depth of the ideas and feelings are worth the fiendishly playful and complex expression, not always the case with linguistic shock tactics. Enough linguistic clues to solve a murder.
3. The Sonnets. Shakespeare. I read Let Me Not To The Marriage of Two Minds at our wedding, and 35 years later at my Best Man's. Many of the Sonnets, especially the first group of 18, play with the Matthew text, ‘He who saves himself, loses himself’ and if I’ve got to choose one, ‘From Fairest Creatures We Desire Increase’ quibbles on this in recommending children. It was written for a young Tudor nobleman yet uncannily addresses the latest young generation, contracted to their own bright eyes. Genius.
4. Not My Best Side UA Fanthorpe. Funny, accessible, clever, erudite, sincere, anguished, steeped in tradition, muckily modern and uprooted, feminist, unsectarian, lesbian, universal, Christian, foul-mouthed faithless, pitiless yet compassionate, a noble heir to Browning’s dramatic monologue and a shabby mate of the free verse yob in the A & E waiting room. The fact that it comes off the page as easy as music or a TV screenplay doesn’t mean it isn’t also shot through with ironic complexity and a glimpse of the abyss. I heard her read many times (and also exchanged letters with her) and that humane un-exasperated voice still comforts my ear every time.
5. They Flee From Me That Sometime Did Me Seek. Thomas Wyatt, the flower of the Tudor court in every way. A tender, exquisite, musical evocation of his love for Anne Boleyn under the shadow of King Henry's rivalry. The treacherous mutability of fame, fortune, power, glory, idols and idylls, Love versus duality, then as now. Since posting this ten, my play about Sir Thomas and Henry VIII has been written and begun touring and includes a reading of this poem at the start, along with a ballad which riffs on some of Wyatt's most ravishing lines. It is a joy to perform They Flee From Me thus: like being back at UEA but with 35 years of life experience under my chastity belt.
6. Green Shirt by Elvis Costello. He later apologised for the high-speed word play of these early lyrics but I never enjoyed his later plain style as much. The distilled paranoid viciousness is delivered through tight lips and clenched teeth but on a crooning Buddy Holly melody that melts in your mouth. Soft as porn yet hard as the drumbeats that coffin-nail it between the verses. ‘You can please yourself but somebody’s gonnageddit.’ I recently performed it (with a bodhran) in a night club under the streets of Norwich I once walked as a punk.
7. The Journey of the Magi T.S. Eliot. The Age of Doubt meets the Age of Faith without losing the glorious emotional charge of either in an angst that transcends both. The magnificent rhythmical grumbling of his early ‘April is the cruellest month’ Waste Lands remains but the Easter serenity of the later Quartets is also present: the paradox of Christ’s birth being a death is the closest and most exact description I’ve heard of what a lived religious experience is actually like.
8. The Lady of Shallott Tennyson. A heart-sore, heart-soaring pre-Raphaelite word painting of such sustained beauty and high emotion you wonder whether modernism chucked out the Romantic baby with the soapy Victorian bathwater. We need this sort of everyman's poetry in our pubs and clubs and lives.
9. The Stare’s Nest By My Window Yeats. His golden apples of the sun rooting and blossoming in the (all too) real world of the Irish Civil War. The verse is no less free (and conversational) for being in a tight form with a masterly and timeless use of the refrain.
10. The Whitsun Weddings Philip Larkin. The great Onanist comes to the wedding and blesses it with one of the tenderest, most elegantly crafted epithimalions of our less deceived age, or ever.

Posted by Gareth Calway at 7:17 am