Room at the Gin 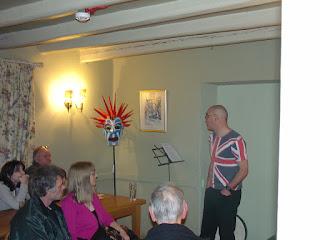 A Punktured History of Britain From Creation to Cromwell kicked off the Room at the Gin cross-arts adventure for 2013 at the Gin Trap Inn, Ringstead, last night. A fusion of poetry, music and storytelling was heartily enjoyed by a full house of 19, spanning three generations aged 8 to 60+, drawn from all over North and West Norfolk, laughing in all the right places and joining in the choruses with gusto. Gareth told our island story from an alternative viewpoint - one where Boudicca, queen of Norfolk, with statues in London and Cardiff, might have a statue in Norfolk (instead of museums telling her story from the Roman point of view) and Oliver Cromwell a statue in every major city rather than an 'executed' head hidden away in Sidney Sussex College, Cambridge in case drunken royalists exhume and mutilate his remains again as at the Restoration. Peter Butterworth performed three new folk songs, featuring stirring music he has composed to accompany Gareth's historical ballads about Cromwell, King Arthur and Ann Boleyn. (The duo performed Cromwell's Talking Head earlier in the week at Oliver Cromwell's House in Ely.) 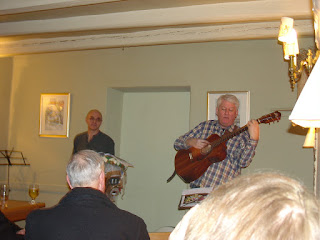 The enjoyment of performers and audience alike was boosted by the unusually resonant acoustics of the back restaurant which perfectly suited the art of voice, drum and guitar on offer. Cindy and Steve gave a warm welcome as always and were pleased at the resounding success the event.

Gareth wrote and performed in the first 'Room at the Gin' event last December which used the stable to explore the roots of Christmas.

In each case, the idea is to select a room at the Gin Trap Inn that suits the material being staged. The next 'Room at the Gin' event, scheduled for the spring - a fusion of theatre, poetry and music - will explore how King Henry got rid of another Norfolk queen, Ann Boleyn, who is said to still haunt Blickling Hall every May 19.

Though the sophisticated scoff
At those who drink the dregs
They will lose their faith
When they arrive at the tavern door.

We had a wonderful time - thank you xx

We very much enjoyed your imaginative review of "history" in fitting surroundings. Good luck with future performances. We hope to continue to support you.

Thank you both for Friday night. It was a really great atmosphere and I'm sure everyone enjoyed it.