Doin different - the last waltz as the Titanic tour goes down singing in Lynn! (Hanse House 11 am, 1 pm, 3 pm)

"These are songs from a book, doin different it's called
All about Norfolk heroes and heroines bold.
It's on sale over there at that Hanse House stall.
You can buy it at Waterstone's and at Jarrold's.
So we're here doin different as Norfolkers should,
Nor folk in the town singing songs from the wood.
We got Margery Kempe, Walpole, two of his kin;
Bad King John, Nelson, Cod Fishers, Sawtrey of Lynn..."
(The tour song in its final adaptation) 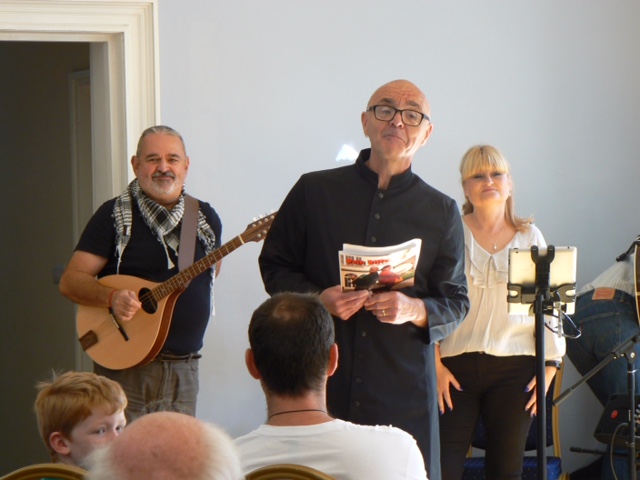 Where Doin different all began - on the last day and 5 years ago when composer Adrian Tebbutt (left) asked me to give him some lyrics about a Norfolk legend. The result was then sung by Roger Partridge (backside shown right!) Also pictured the lady who now sings it and lead singer on Heritage Day, Sharon Clifton. 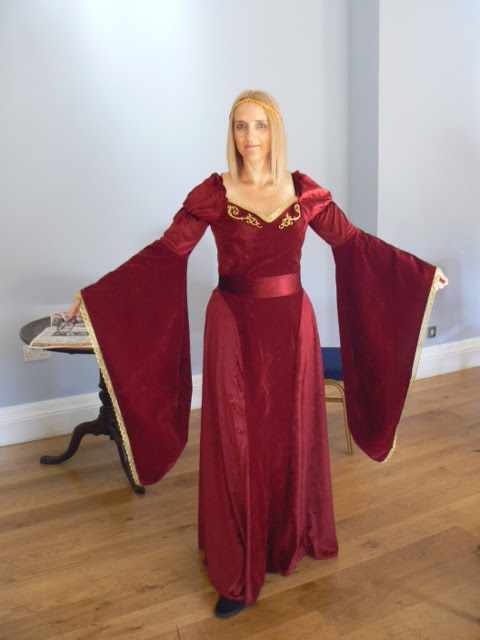 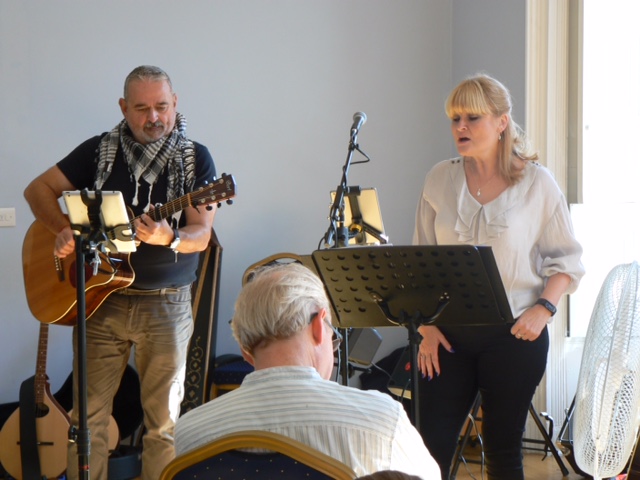 The Fried Pirates warm up. (and another back view of Jolly Roger) 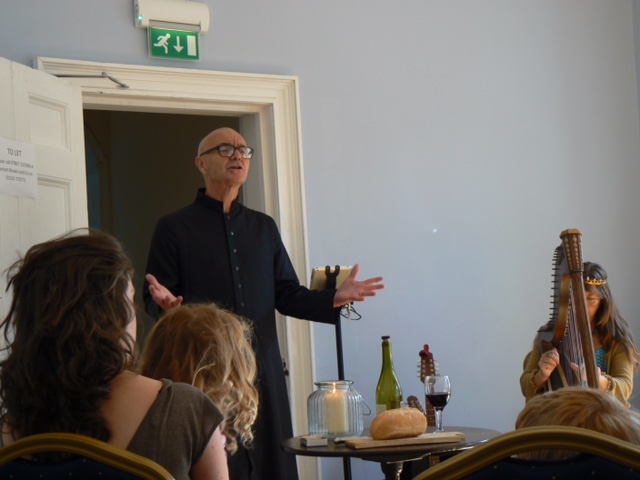 William Sawtrey of Lynn's life or death issues with the eucharistic bread and wine. Parrish priest of St Margaret's (the parish this Hanse House performance was staged in) and a Lollard martyr he was England's first burned heretic in 1401. 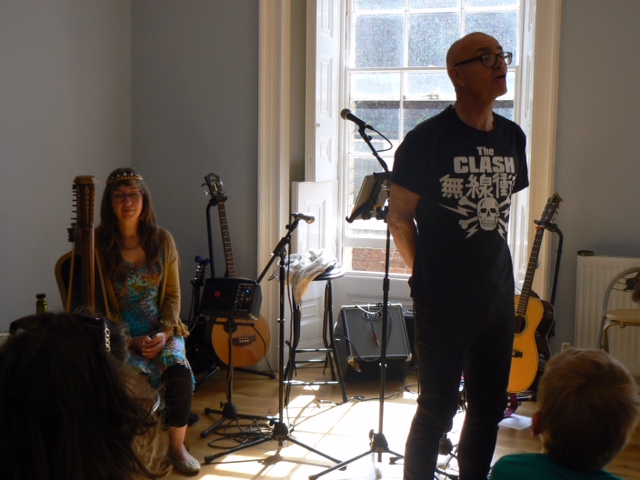 The Ballad of Badass King John, a Lynn Pride rap that went down well with children and adults alike. 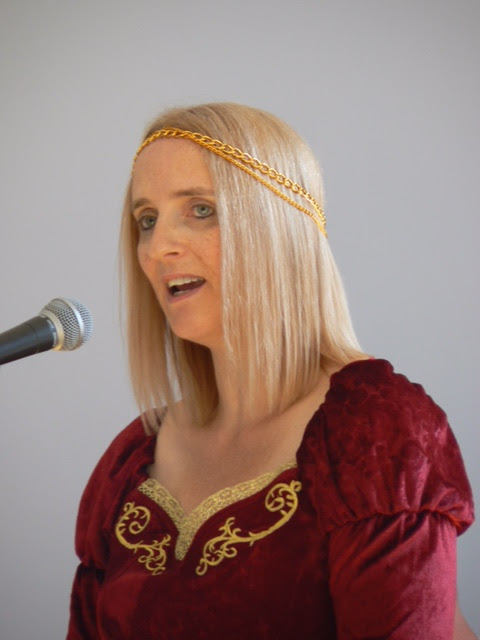 Lynn singing about Lynn in Lynn! 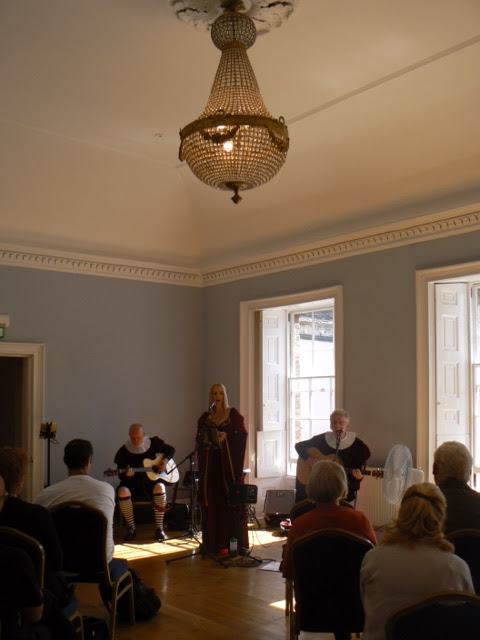 Waterline's elegant music and costume perfectly suited to the occasion 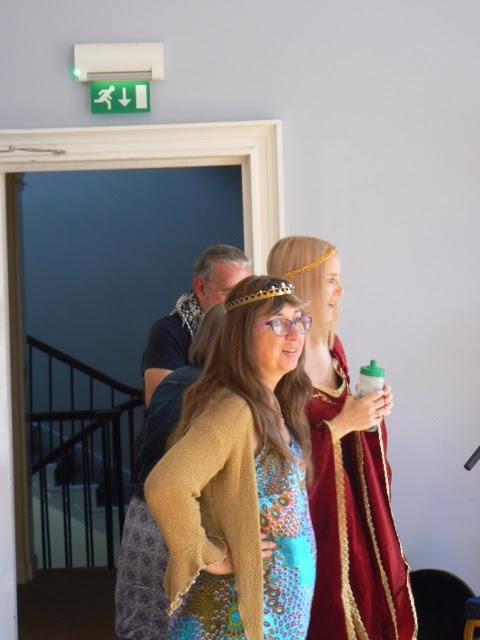 Vanessa Wood-Davies (harp) and the minstrel Lynn rest between sets. Melanie Calway and Adrian Tebbutt manage to keep them both standing. 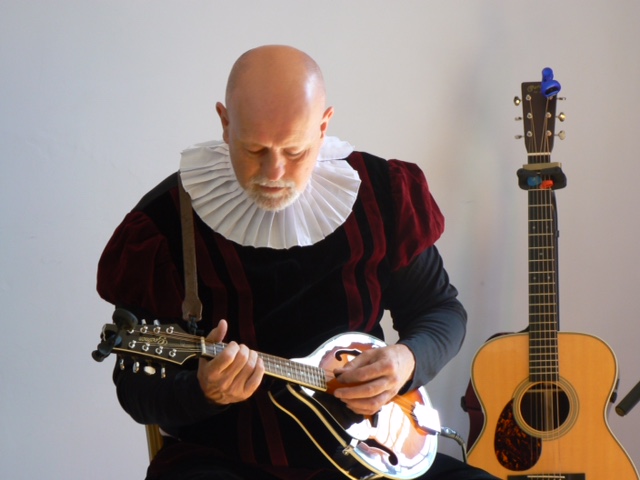 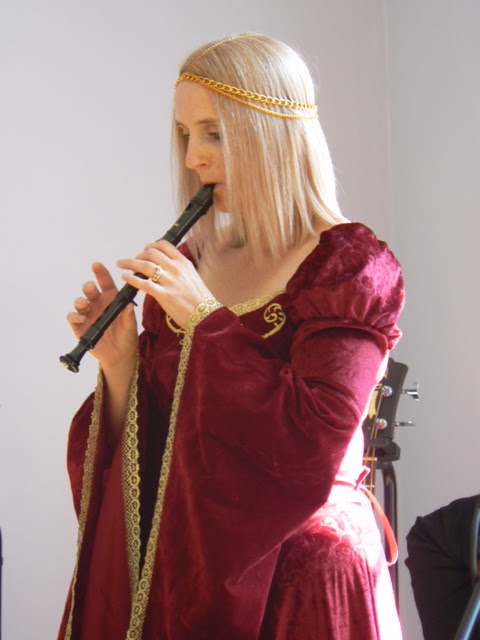 Hullo, that's a bit of added woodwind on The Ballad of Sir Robert Walpole 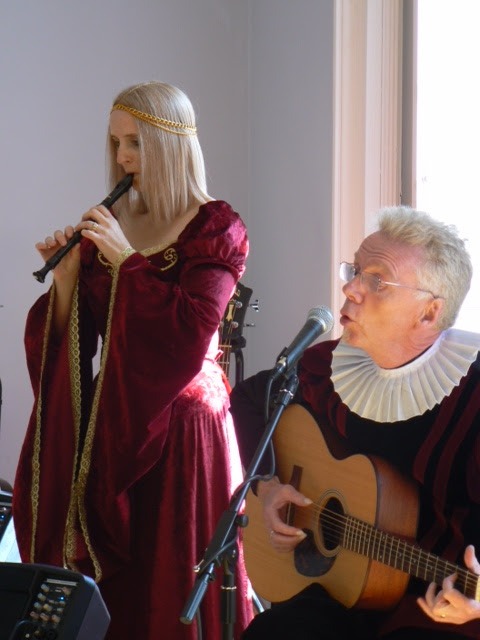 The composer leads Waterline in the Ballad of Turnip Townshend 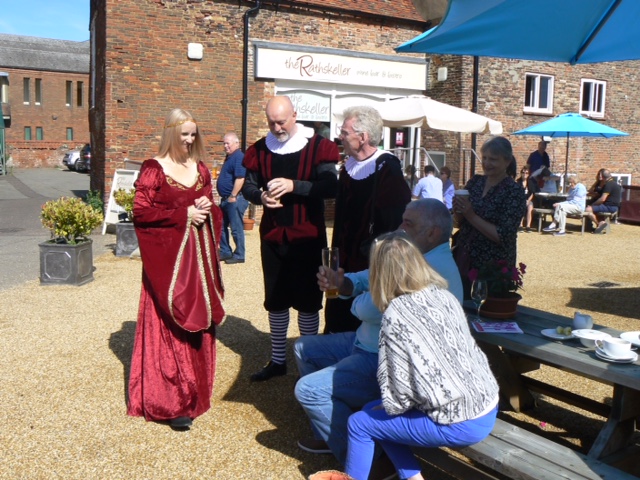 It's not all work. Some folk club regulars give their verdict. 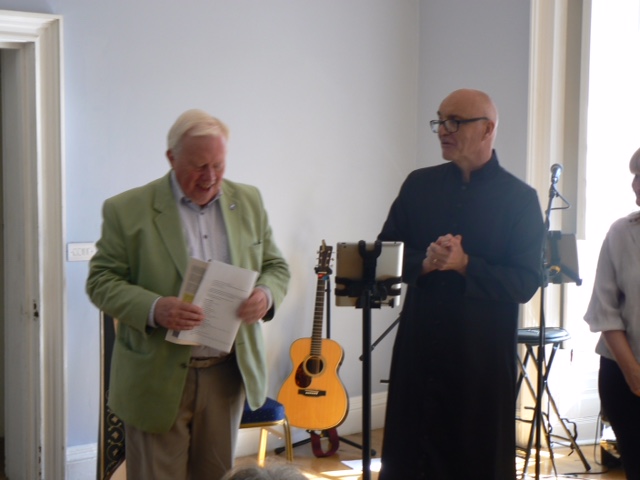 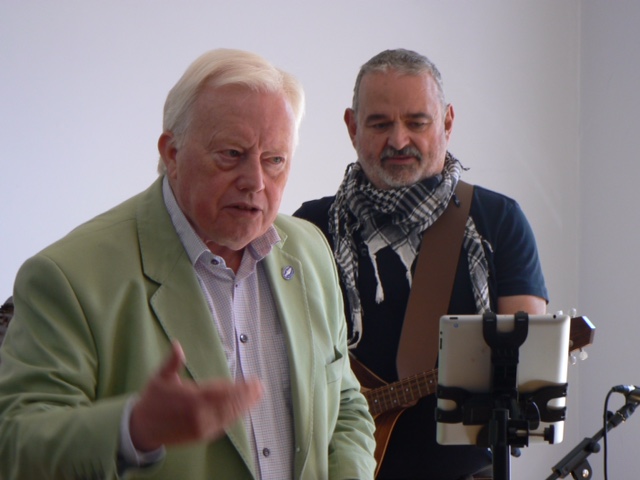 Dr Paul is fascinating as always about how folk  ballads tell the social history of the town he loves. 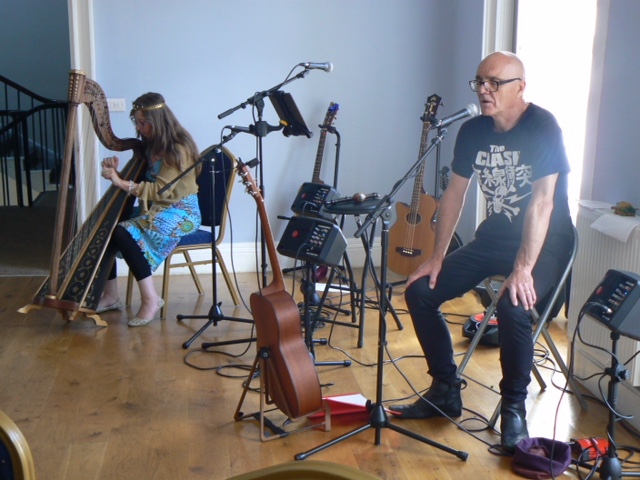 Vanessa and I borrow Waterline's impressive set up for this performance of Margery Kempe music. 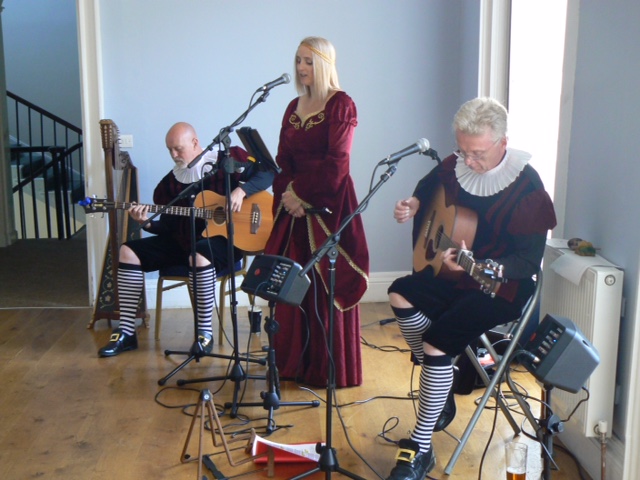 All right lads - we knew they weren't really tights! 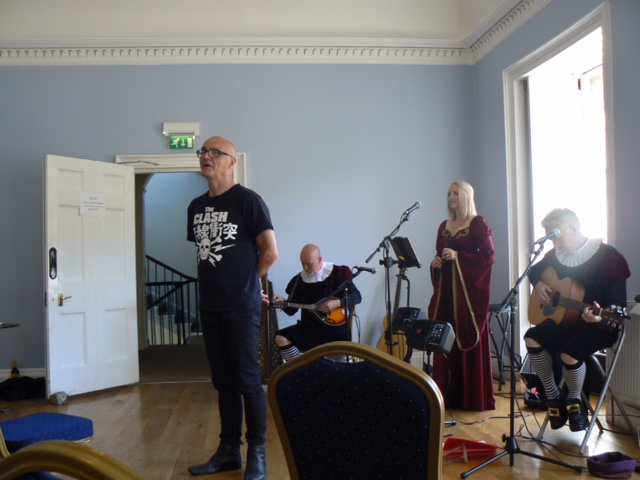 I introduce the spooky 'Ballad of the Brown lady' - our ghost ballad about Dorothy Walpole, who is said to haunt both Houghton Hall (built by Sir Robert Walpole) and Raynham Hall (built by her husband and, some believe, her murderer Turnip Townshend) (we exonerate him in this ballad and in the spooky folk video we made of this ghost story) 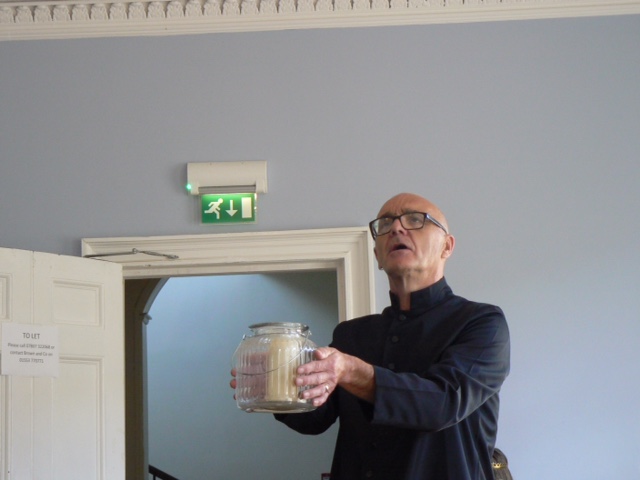 "I rise up like a morning star of love and faith and hope..."
(Great idea of Pat's to photograph the "holy without smoke" of William Sawtrey of Lynn's burning!) 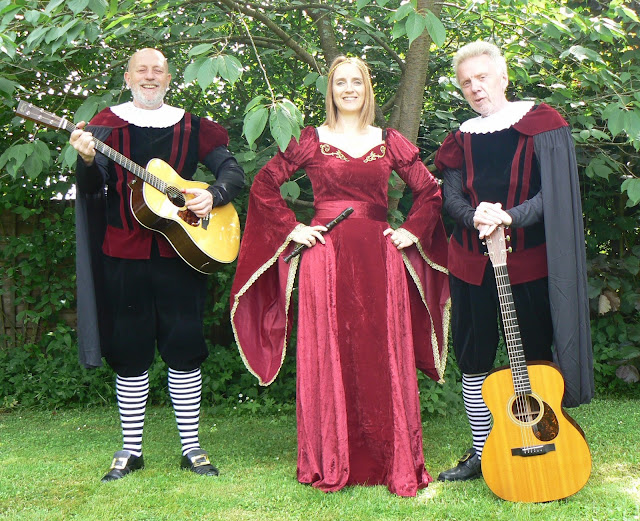 The Titanic 21 gig tour goes down singing into the September sunset this Sunday,the last four gigs flagged up and flying in the EDP, The Lynn News (including a page 3) and Lynn's 'Your Local Paper.'

Nine new folk ballads telling the long and colourful history of Lynn will be performed in the Blue Room of Hanse House as part of Heritage Day this Sunday.

The 'Doin different'  collection has been touring as a musical show since the premiere at Lynn's Hanse Festival last May - taking in Ely Folk festival, Folk in a Field, Lynn's Folk in the Town, the King and Queen in Foley St London W1 and the archaeological dig in Sedgeford- and on Sunday the 21 gig tour ends where it began - at Hanse House.

Twelve Norfolk-based composers have written for the project, a score of performers have participated and four new folk bands have been formed as a result. Three of these folk bands will be on show this Sunday.

One of the aims of the book is to celebrate Norfolk's often underestimated role in British history and another is to draw attention to Lynn's amazing contribution to that.

The Fried Pirates will perform ballads about the heroic and under-sung Cod Fishers of Lynn and the Siege of Lynn in 1643. Lovehearts & Redwine will offer homages to Lynn's religious pioneers Margery Kempe, who wrote the first autobiography in English, and William Sawtrey, parish priest of St Margaret's, the first man to be burned for his beliefs in England. And to not so Bad King John, who gave the port its first independence from Norwich. Waterline will sing the praises of Lynn's MP for 40 years - Sir Robert Walpole, Britain's first prime minister - and of Lynn author Fanny Burney, the mother of the Jane Austen novel.

Waterline will also take your breath away with an exquisitely sung ghost ballad about Walpole's sister, the Brown Lady, who is said to haunt Walpole's magnificent Houghton Hall, and the Fried Pirates will add a stirring shanty about Nelson, who said Norfolk volunteers were worth two of other men and whose crews included plenty of Lynn's sea-hardened men.

All three bands perform at 11 pm and 1 pm and will be introduced at 1pm by Dr Paul Richards, town historian. At 3 pm, Lovehearts & Redwine and Waterline will perform slightly longer sets from Doin different. The Fried Pirates will perform a different set at True's yard  from 2pm-3.30pm. Admission is free for all events.

'Doin different - new ballads from the east of England' (lyrics with musical scores, photographs and historical support) is on sale at Waterstones, True's Yard, Jarrolds and Hanse House or via www.poppyland.co.uk. You can find online links to audio and video performances of songs, scores and extensive historical resources and features at www.garethcalway.co.uk

The Fried Pirates at True's yard. They will be doin different in the Blue Room of Hanse House at 11am and 1pm 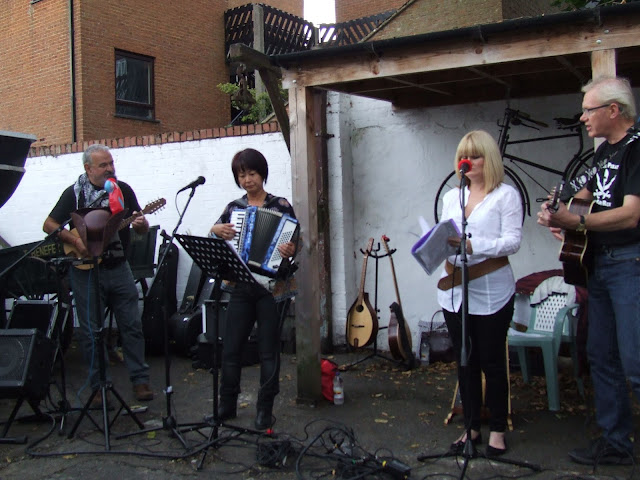 DONE different. Tour's end and into the sunset!


Crossing off the last gig and putting Done! next to it. 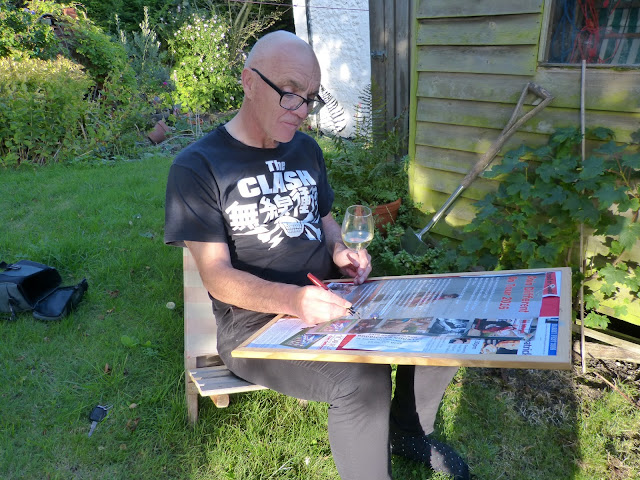 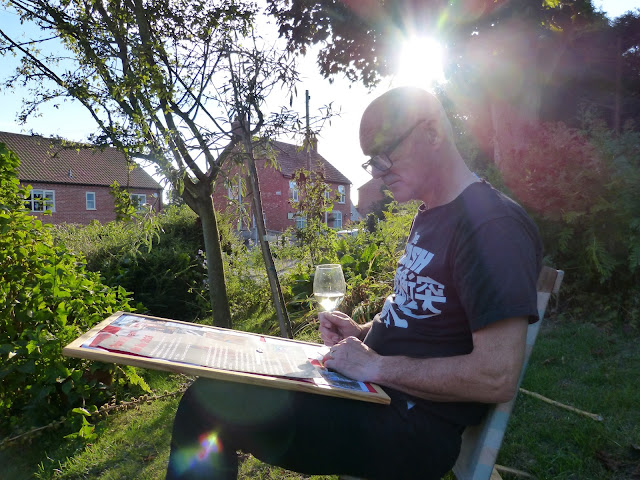 Posted by Gareth Calway at 1:24 pm