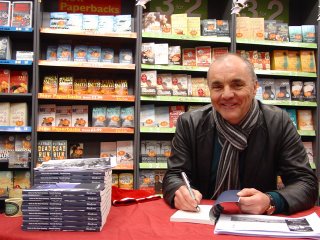 This article is published here courtesy of the Lynn News

Discover yourself through poetry, says Gareth

A WEST Norfolk poet is on a mission to encourage people to discover themselves through poetry as he promotes his newly published collection.

And he will now be kept busy touring and giving readings of his poems, both in Bristol and Wales where he spent his early years and around his current home in Norfolk.

A mixture of new work, plus the best of his back catalogue, the collection covers everything from autobiographical poems about going to school and later becoming a teacher himself, to pieces about the Norfolk landscape.

Unusually it also features poems about football, including one on the 1966 World Cup final, drawing on Mr Calway's experience as the official poet laureate for Bristol City Football Club.

While poetry and football might seem an odd pairing Mr Calway said football chants were similar to poems and hoped by showing the link he could help make poetry less daunting.

"I think sometimes people are a bit frightened of poetry and I've spent most of my career trying to make it not so frightening.

"It's a great way of expressing what you feel and if you teach it properly almost without realising it students can get in touch with aspects of themselves they didn't know about.

"A lot of education today is about literacy rather than thought and feeling and I think poetry relocates that. Poetry should be a voyage of discovery. It should move you or make you laugh," he added.

Mr Calway will be holding a poetry workshop at Smithdon High School on Thursday, July 20, at at Wells' Granary Theatre the following Friday (28), before a reading at Westacre River Studios at a date to be set in November.

He is also hoping to encourage students at Lynn's King Edward VII High School - where he worked previously - to write more poetry by sponsoring the school's sixth form poetry prize.

Copies of Exile In His Own Country, priced £7.99, are on sale at the Lynn and Norwich branches of Ottakar's, or available by emailing Gareth via this website purchase page or via publisher, Blue Chrome's website at www.bluechrome.co.uk.

An excellent article from my local paper, if I may say so! See also Western Daily Press Article (on this website, to your right) and look out for future reviews of Exile In His Own Country in the Western Mail magazine (Saturday June 17) and Eastern Daily Press

An excellent article from my local paper, if I may say so!

First time for everything from the Lynn news then I suppose! lol :P

Brought my own copy today! (of your book not the LN!)

It has taken me until Tuesday night to realise who you are - and I've seen you twice since reading this without making the connection! Still, I am 5o and falling apart!Hope you're enjoying the book. Let me know. Meanwhile, make sure you get a copy of the TES this Friday, where it is featured.