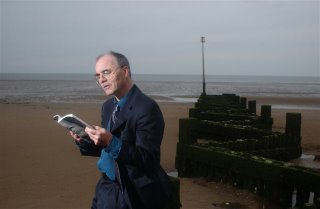 Dad dropped me off in exactly the same way he had done in 1968 when I was 12. I walked down the same steeply-sloped playground feeling pretty much as nervous as I had then. What the hell was I doing, bringing Bristol City football poetry into a Welsh Rugby heartland? A polite kid opened the door and a couple of others greeted me, without being prompted, in the corridor. Then the Secretary greeted me wearing full Bristol City regalia. It was going to be ok! I found that I had been given the old gym for the whole day. Quite a coincidence. It was the actual setting for several of the poems – notably Welsh Rugby, with its description of Cobner’s beating of yours truly in 1969 – and it retained almost entirely the infrastructure of my youth. The vaulting horse brought before the public in my play "Getting On" and my comic novel "River Deep Mountain High" was as prominent in the actual room as it is in my writing. The lectern I was lectured from for six years by my old Headmaster and his deputy was also still there and I delivered my comic version of their assemblies later that day from it. (It is also now accompanying me on tour as a key piece of stage furniture). When I asked the Year 8 boys what football team they supported – ready with a quip about how few seemed to follow Bristol City – I was given the usual litany 'Man United', 'Arsenal', 'Tottenham Hotspurs' only in that same valley sing song that had first set my ears ringing in December 1968. Of course, the Rugby Only heartland idea is a myth: Rugby is the official school sport, yes, and rightly so, and the locals are very good at it: but just as we did, the kids play and follow the round-balled variety at every opportunity. All the same, when TES Cymru took photographs at the end of a long day , it still felt peculiarly evocative of the 'Exile in his own country' themes of my book, that these valley kids should be chanting Bristol City slogans in Bristol City shirts in a Welsh playground. Even more fittingly peculiar, when I performed a schooldays section to the whole of Year 9 in the afternoon, two of my own teachers from the 60s (and very briefly colleagues in 1980) came out of retirement and were watching me at the back. The Head of English gave me a tour of the old Main Block at the end of the day and promised to erect a blue plaque over the Victorian radiator in the form room where I had my First Real Kiss. The radiator that day was blisteringly hot but the girl was even hotter. I'm not sure what kind of plaque about us could be raised in the Old Geography Room next door, which like all this floor was now the English suite, making me feel even more like I was still there. The Old Head's office where I was regularly caned now houses voluntary SATs papers. The punishment goes on in different forms. Though (like me) everything in the old block was 35 years older, little had changed or grown less solid. It was just about half as big.

Ah! The smell of the dressing room. I had a long mobile phone call with my old dramaturg David in the dressing room. He is the subject of the poem "Memorial"; in the book and he is younger and more foolish than me and he also rescued me from early middle age with theatre and a leather jacket in my mid thirties. I said I was very nervous. He said it was better than being bored. I wandered backstage with about fifteen minutes to go and saw Okker at the bar - I was at Abersychan with him and I'd forgotten how close we were 35 years ago. I'd not seen or heard him since I was 15. We exchanged a wondering smile. I recognised him before I even knew who he was. I went back up to the dressing room thinking how you can't bullshit people you've grown up with and what the hell was I doing putting on this 'show'!? What an arrogant act it all is really, charging people to come and see you tell your own story, especially when some of the audience are actually in it. There were in fact about six characters both in the show and in the audience this evening, in particular my parents, who were repeatedly featured in the poems and who were in the front row. Still, it kept me honest. There were 32 people in all and I was doing the show in the lounge with the audience seated around bar tables. So it felt pleasantly full and my little stage set of trellis downstage left and easy chair upstage right felt right - like an exile's home. When I bounded onstage to the clunking rock'n'roll of Bill Halley circa 1956 (the year of my birth) my mother was jiving in the corner of the performance space with another woman of similar age. How appropriate that my mother should be jiving at the edge of a poem I was presenting about my first memory. How ludicrous also. And how unique she is! (I’ve got to the age where I finally see her as a – genuine - character in her own right, though very glad she was my mother.) Anyway, I got on with it and got some laughs for my mime of infancy. I was doing some of the poems without the book and this was the very first time the show had appeared before the public so it was both thrilling and nerve-wracking at once. Another schooldays friend had said he might be bringing Chris Garland, the 1970s City, Cardiff City and Chelsea star and so I assumed the bloke next to him was my old hero. Later on, I thought he doesn’t seem to be enjoying the Bristol City stuff much. I found out afterwards he wasn't Chris Garland (though the old legend had sent me a signed programme and good luck wishes for the tour) and that he was deaf. In the interval, I listened to the Eurovision Song Contest on the radio and felt much better about the 'musical' opening of my second half. It's great coming on to a changed set – I’ve never done this before – and especially so when it’s that totemic microphone on a stand. Oh yes. The world jazz rap went down well and then my Beatle prose poem, complete with wig and guitar mime, was finally revealed. As so often, the riskier it feels, the better it goes. And as always, the magical love people still have for the Beatles made this the favourite section for several children of the sixties but also for some of the actual children they'd brought with them. (After all, theirs is a sort of fairy story.) If I'm not absolutely sure if I'm writing about Beatlemania or actually displaying its lifelong symptoms ("I need HELP") then at least I'm not basking in their reflected limelight while trying to shoot them out of it as is the case with so many Beatle-debunking 'exposés'. And it's a childhood fantasy come true getting applause as I do my deep Beatle bow at the end. The final section ushers in a third set – schooldays, including my old school lectern – and the comical reality of having to earn a living in ‘exile’ from my artistic vocation. My old French teacher from the late 60s queued up for a signed book at the end and his deadpan vocal delivery hadn't changed for 35 years. My younger sister (with whom I'd drunk too much the night before) said she'd wanted to applaud after every poem but wondered if you should. Anyone reading this, please note I (in common with I suspect most performers outside of the classical music circuit, if there) have no philosophical objection to applause between numbers! Outside the stage door I tried unsuccessfully to arrange an Indian meal out with some younger members of the audience before driving the set back to Pontypool, where I stopped off at Omar Simpson's to get a doner kebab and a 'small' portion fof chips for one person - ie enough for three hungry Weshmen - on my way home to a comfortable supper in with my parents. I have rarely felt so content.
Posted by Gareth Calway at 11:51 am