Last Night of the Tour 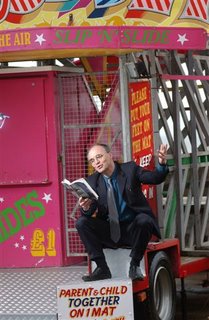 Well I finally got 50 in – the right number for a 50th birthday tour. And it was good to sense 50 souls following the first half action (growing up, leaving home, attempted manhood/ home-building and the would-be 'home' of football). And in the second half all 50 were rocking in their seats for The Beatles and (especially) the school poems. It really was a laugh a line for the latter and the skill of the comedian came into it – timing the next line just after the laughter peaked etc. A tricky manoeuvre? Well, I'll happily accept it. It's a hell of a lot easier than declaiming lines into a tumbleweed silence, that's for sure, and though this tour has been well received wherever it's gone it IS harder when the audience is small. Then the introduction of some tragic Boudicca poetry (from a vintage 1997 show but new to this tour since Wiveton) hard on the heels of the comedy show Marked for Life where I exploit the difference in meaning between 'schooldays' and 'education'. Such a key change from major to minor might have failed but it didn't. The Boudicca tour will always feel unfinished so it was great to be performing a slice of it again - notably without the constraint of half a ton of latex over my head…. Both halves seemed to go a lot quicker than usual last night. The consummate professionalism and physical suitability of the venue – as well as that big warm chuckling audience - also helped.

So, I’m looking back over the tour dates. The biggest theatre audience – until the last date – was the first – at Cwmbran. (I can't count the captive audiences of assembled Year Nines at Abersychan and Diss and the Year Seven assembly at Wells). Biggest books sales were at Cwmbran and Westacre though I think the biggest in proportion to audience size were probably Chepstow and Wiveton. The most severe disappointment – at a time early on in the tour when I wondered if it would ever really get going – was Sheringham where I lugged all my stage furniture and props and scoops in the Times Educational Supplement only to have to lug it all away again along with the stigma and chagrin of a cancelled show. (I hope the six who had booked tickets in advance got to see it somewhere anyway.) The lesson is, I think, that hot summer Bank Holiday dates at the seaside are not the best time to fill a theatre and that my show has to be marketed as the poetry/theatre crossover it is, not as the 'Literature' that audiences might preconceive as being a bit like homework. However, no venue on the tour was wasted and Sheringham produced the excellent laser printed colour programmes for several of the other dates, notably Westacre. Even The Lord Mayor's Chapel Bristol, where I went to perform with the whole of the city walking the other way to the Ashton Court Festival, provided some slick posters and displays in the heart of the city that looms so large in the book and show. Of the schools, all were special in some particular way. Abersychan, my alma mater, where it all began, gave me that wonderful feature in TES Cymru and TES as well as a day I’ll treasure for the rest of my life (see report, May 19 2006) – and a "Famous Poet Visits" feature in their posh newsletter which is the sort of thing all ex pupils must dream of. Diss was my biggest and boldest workshop/ performance combination and reversed a small run of low turn outs at a key time as well as putting the tour funds well into profit for the first time. It is also a specialist college that puts English where it should be – at the heart of the curriculum. Wells School was the best cold rainy Thursday a poet could have: a front page feature in Secondary Ed magazine on National Poetry Day turning up mid-workshop on the staffroom table. (See forthcoming article in same magazine about the tour and the joys of tabeleaux with top sets and the different but equal joys of bottom set Year 11 boys I spent an hour chanting with). Real work and a real joy. And finally, my own school, delayed from July (when I was laid up with a fever at a time when my own temperature was about the same as the Sahara summer outside) into a four day stint with Year 7s. Another front page (Lynn News, who'd covered the launch with a most intelligent article way back in April) and a gradual loosening of the Head of Department tie as I eased into the role of SMPISS (Slightly Mad Poet In –Smithdon - School). Ending that week in Wiveton, the gentlest and in many ways most intimate audience of the tour – poetry direct without theatre, the theatre for once not needed – and the rediscovery, for that venue, of my Boudicca poems, notably Safe European Home which an old afficinado requested. Then the little extra mini-reading in Camden Town as part of Bluechrome Live – Saturday 28 October – which, being a provincial from a tiny Norfolk village, I found extremely exciting just for being a Saturday night in London (the Halloween/ Sauvain-celebrating / Neo-punk crowds in the streets were a tremendous contrast from Sedgeford where a passing stranger brings us to the window) and where I confirmed that Boudicca was back on the Calway performance programme. I also met Guinevere Clark, a woman with an Arthurian name and the same initials as me whose book was published and marketed by Bluechrome at the same time, and many other up and coming Bluechrome poets.

I really wanted some kind of big harvest tour date to finish and, what do you now, I really got it at Westacre. There was the excellent fifteen-twenty minute feature on Radio Norfolk (URL for Listen Again etc. is on this website) the previous Sunday afternoon. Then several people who had been meaning to come to one of the shows finally made it, including some people who share the Welsh upbringing experience and now (like me) are based in Norfolk. And even, would you believe, an ex-colleague from a Lynn school (now North Norfolk) who shares my own particular hybrid West Country/ Welsh exile – Welsh mum/ Bath dad. There were budding poets and sixth formers (and a Year 9) from my own school – one of whom I spotted from behind stage in the bar with some nervousness but who certainly attended more last night than he often does in class! (I won't embarrass him by naming him but he knows who he is!) He was laughing his head off, though that's not the phrase he used to describe it. There were people I know quite well but never expected them at a poetry performance – nor did they perhaps – but it was great to have them 'with' me in every sense. There were lovely beautiful people from my village I have hardly seen since the last show they attended about six years ago. There were people I didn't know from Adam (a rare occurrence in Norfolk) who came up and said lovely enthusiastic things and bought books at the end – just what you want after a ninety minute one man performance. (In case anyone ever wonders what to say in these situations, "That was brilliant, much better than I expected, you’re a genius, wise, beautiful and very very funny, please may I have a signed book, here’s eight pounds" will usually do the trick! The one flaw in this whole set up is that after giving everything in a Friday one man show after a week at work, I then have to talk as I sign books to people who really want to make contact – as I do - but there’s always someone else behind them holding a tenner and wanting the same (and another two or three behind them). Lots of people had a different favourite poem or section and that’s really gratifying and I want to ask why but there’s never much time. It’s a wonder I even remember what my name is to sign it let alone maintain a conversation. Still, I have a few months ahead now where I can have all the solitude and quiet that I want. And probably will have too much of it before the month is out!

Next little gig, a Christmas poem from the book in South Creake. That'll do nicely.

Meanwhile, thanks to everyone who came to the show, bought the book, helped organise or host any of the events and crossed paths with me in any way on my little Exile pilgrimage. It’s made being 50 feel like 40 was supposed to – well they say 50 is the new 40:- a new beginning. 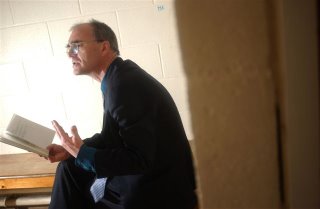 Posted by Gareth Calway at 9:42 am

Hi Gareth,
always wanted to call you that. Great performance, got to see a totally different side of you to what we get to see in class and around school. Wasn't expecting to have such a laugh but hey, turned out great. Hope you had a good birthday and look forward to another 50 years to come! Regards and congradulations. Rob Barnes

Great Show!
Wasn't what I expected- much funnier than I thought it was going to be (especially "Ofsted" and "Mocks").

a terrible beauty is still born