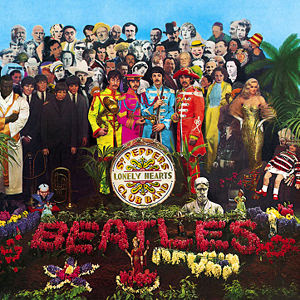 Forty Years Ago TodayThe Beatles' Pepper-hot summer of love soundtrack album came out on June 1 1967. As a tribute to a band who curiously write so often for 'all the lonely people' (why did loneliness preoccupy such in-crowd guys?) , here's an excerpt from my Beatle novel/play/poem/whatever...

How did you do what you did to my rebel big sister in the summer of love? If I knew how you did it to her-

- If you can remember it, man, you weren’t there.

Tch. I wasn’t. I was eleven. I “had to go to bed early”. It would take me until 1973 to grow a moustache. The only acid I experimented with was in chemistry practicals. And my only bad trips were the bus rides to Grammar School. I wanted to go all the way down to Strawberry Fields instead - and then all the way up Penny Lane. As always with the Fabs, you got a lot more for your pocket money. I had to rely on the radio of course, not having the largesse of my podgy friend Timothy, but by time you got there, a haunting elegy is making you as happy as a fool on a hill. And then you turn around at Penny Lane for a big yellow iced lolly of joy. And all the better for that hint of acid in every lick!

Meanwhile, in the grown up world, The Times is calling Sergeant Pepper “a decisive moment in the history of Western civilisation.” The BBC is banning it. Tim Uptheroad’s Dad is saying the Beatles are young boys with more money than sense and that they dress like women. My big sister says his Dad’s idea of a man is a killer in khaki and that she prefers the peace uniforms the Beatles are wearing against Nam on ‘Pepper’. Mam snaps back that the summer of love is a fancy phrase for living in sin and that my sister has let her knickers down, whatever that means .

Well, the Stones usually do. Which isn’t a put down - originality isn’t everything. Stones’ records seldom start less than brilliantly. They really kick. And then they get stuck in a groove. But the Beatles were never predictable like that. And in 1967, having rewritten the groove in 1963, they rewrote the groove again so completely that for once the Stones – with the possible exception of Brian Jones - couldn’t find it. Meanwhile, Sergeant Pepper’s Lonely Hearts’ Club Band led a whole generation up a completely different garden path. Past tangerine trees and flowers that grew incredibly high. Follow that, Mick

Nobody could though. Not even the Beach Boys whose mind-bending harmonies helped to inspire the change. And certainly not the arse-wriggling Stones. The Stones weren’t going to start evolving now. They had peacock-and fannied into the aristocracy of the English class system in their Beatle haircuts sooner than you could say St John’s Wood while Our John was still agonising about childminders. They’d followed the Fabs to the top of the English-free zone that used to be the US charts and we called it the British Invasion. But before I Want To Hold Your Hand any British Invasion was about as likely as the “Coronation Street” theme panning over Manhattan skyline. And the un-cute, unoriginal – though undoubtedly rocking – 1960s Stones never got invited up to Buckingham Palace either where naturally our Mopheads of the British Empire shared a pre-MBE joint in the naughty boys’ room. And when some debutante asked John if he was “the funny one” he said, “No, I’m the one with the big dick.” “The Beatles want to hold your hand but the Stones want to burn down your town,” wrote Tom Woolf. But it was the Beatles who burned it down.

I read a PG Wodehouse public school novel recently where all the angst is solved in the last chapter. The chaps who doubted the chap who couldn’t rat on a chap (even though that chap, rather than he, was a bounder). But in the last chapter it all comes out and the chaps organise it so the hero gets to score the winning try as the house team he’d been sacked in disgrace from wins the Cup. And as I put the book down, I suddenly found myself saying aloud about my life and career, “It hasn’t been like that- it’s all gone wrong for me.” And I cried like a child for what I’ve never had. And it’s that feeling – that glimpse of Eden from outside – that the Beatles music always captures for me.

George, what’s the most important thing in life?

Email ThisBlogThis!Share to TwitterShare to FacebookShare to Pinterest
Labels: Sgt Pepper, Summer of Love, The Beatles

I heard this on Rikki Lake:

Thanks, Mooney. Have you ever considered a job in Pastoral work?

I once applied for a job as a scarecrow but I never made it to interview.