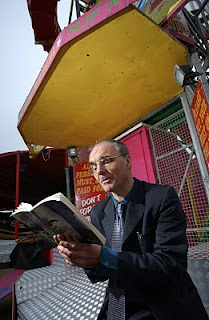 I mean - literally - the dream I woke up with this morning. I was on the touchline for the US game and Beckham was there in an enormous othopaedic boot. It was about a foot high. When I queried his presence in that condition, he grinned cheerfully and said in that boyish twang,'I've been selected for senior field duties. Anything to help out.'
'What - you're actually playing - but you're injured?'
'Yes.' said Emeritus Golden Balls,' with a likeable shrug.
'But that's incredible!'
What didn't seem incredible - in the dream - was that I was also about to go on as sub. No, I'm not injured - well, that football-related injury down a railway embankment en route to a Bristol City game which left put me out for the rest of the 2008 season still troubles me - but I'm 53 and have no experience of football above a village green standard.
And it seemed perfectly natural when Beckham long-balled me soon after from midfield with an inch-perfect assist which I scuffed-tripped over past the keeper with all the grace and assurance (don't knock it - it works) of an accidental Crouch deflection. In most dreams, especially mine, the ball just won't go in. This did. It was wonderful.
Back to reality. I woke to a newspaper picture of a third choice English captain who can't speak and a singularly ugly and unprepossessing team in grey Marks and Spencers drill looking very ordinary there (with the exception of Rooney, already booked in a friendly for swearing at the ref, who looks like a potato but who in form, a genuine great and the heart and lungs of the side ) among the galaticos of Brazil, Spain and (maybe) Argentina.

Ah yes,but it's chilly in South Africa this time. For once, we have the weather on our side. And a fierce Italian manager who can out-think tricksy Latin tacticians because he is one. And a dead ball specialist who can come on for 'senior field duties'. (No, that was just the dream.) If only we had a few foreign players as well, we might still do it...

I worked out that we probably need to get past Serbia in the Last 16, France in the quarters and Italy in the semis (the newspaper says Brazil) to lose to Spain in the final. We can't meet Portugal until the final this time and I don't think they'll get there anyway, or possibly even out of a group containing Brazil and Ivory Coast. Simple as that.

And then I really woke up?
Posted by Gareth Calway at 1:35 pm