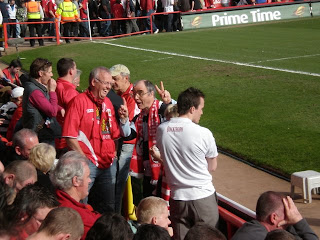 Here's one. Because we allowed the USA to pinch our place in the World Cup (as it has in the world), we now have to beat Germany, Argentina and Portugal to get to the final in a competition where France and Italy go out shockingly early. When has that ever happened?

The one team we didn't beat then and the world said we needed to to really prove our case (flash in the golden pan winners 1958, 1962 and 1970) was Brazil, whom we will doubtless keep waiting in the rain this year before beating them 1-0. Just to put 1970 straight.

That's the way I'd write it anyway.
Posted by Gareth Calway at 4:34 pm