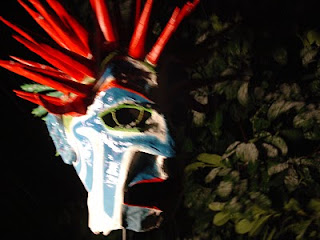 I’ve been watching the fairy bulbs grow into the gloom
Of this Cotswold Christmas city street middle afternoon
And it made me think of you.

Poets are finding it hard to get a place
(I’m chiding late schoolboys) and still see Lucy’s face
A dark looking glass through.

It’s been a long time since 1631
Since metaphysics met a physics you never knew
But what you didn’t do remains undonne.

Notes. St Lucy’s Day is December 21, the shortest day of the year. And John Donne’s poem should be written up in solstice lucifers and Christmas tree lights to celebrate - and also this year on the red-tinged lunar eclipse. I always think of it as the dusk comes down on the longest night. It's a poem in which somehow NOTHING IS.

I wrote this little tribute - in a sudden retrieval of self and energy – after getting out on ecstatic parole from a long first term of teaching at Brockworth Comprehensive, Gloucester. It was outside the Co-op in Eastgate, for those who are interested. I never really got the last bit quite right (it refers to Donne and his wife Ann’s gravestone on which is engraved John Donne, Ann Donne, Undone) but this was the best I could do and since I can’t remember what else I was trying for now anyway, it will have to do.

The photograph is Boudicca as the Mother of Britain, taken in the dark and the snow outside the recording studio recently during my recording of the album Boudicca;Britain's Dreaming..

Posted by Gareth Calway at 3:44 pm