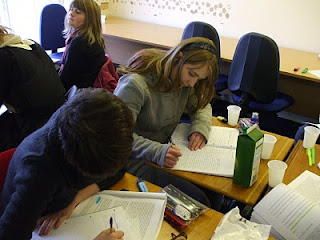 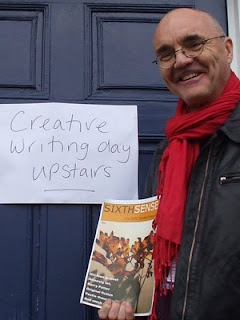 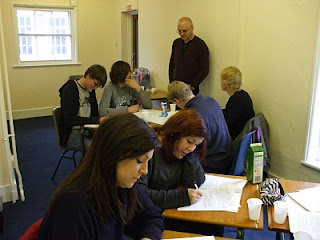 Just a perfect day (as someone once sang.) In what I now know is called 'Shrew- sbury' not 'Shrows- bury: though apparently some posh locals insist on 'Shrow- bury'

The 24 students concerned had all opted for the day and even (I believe) put a bit of money where their pens were. I have never known a more positive bunch and with this sort of number and atmosphere felt able to help at an individual as well as group level. This is very satisfying - certainly for me as a writer/group leader and (by all accounts) for the participants also. There is nothing better than working with keen young writers - full of energy, originality, ideas and in this case considerable talent.

I started with some concision skills - using the haiku form as a way of distilling a personal statement of self in a single breath, on a timeless moment, as if your mobile had only 17 syllables of credit or charge left in it. Though mainly a warm up exercise for later tasks, this homage to the imagists' 'say what you want in two/words and get thru/long frilly/ palaver is silly' produced some memorable haiku in their own right.

I then read out my short story 'The Interview' - relying only on the words in the air (or radio airwaves) not on printed copies - and guided students through my editing process of this tale from 5000 down to 2500 words. The clue is in the genre name - short - and a story. I used Dylan Thomas's ultimate short story - 'For sale, one pair of baby shoes. Never worn' - as an example of how much one can leave to a reader/listener to fill in for themselves.

After hobnobs and (far too much) orange juice, I tackled novel openings, using the first thousand or so words of my 70,000+ thousand word novel 'River Deep Mountain High'. The focus was on how this most important thousand words of all divides between hooks and exposition, the former to ensure your reader carries on reading, the latter to ensure there is something substantial - a credible world - for them to read about. How much I was using Wales as a hook - the humour of a half Welshman laughing his other half off, albeit fondly - had a special resonance so close to the Welsh border. It was not the first time I was a little disorientated to realise the Wales nearby was not the Newport valley I have always sensed from the West but the North Wales of Wrexham. The students then started to set up their own novel openings and while I may claim credit for the hook/exposition device and a few ideas about narrative as a starter, none of this would mean anything without the rich ideas, worlds, world-views, narrative originality, characters and gift for language the students already had with them. (This is how 'English' used to be before they strangled everything with frameworks and models 'delivered' onto students' heads by teacher-postmen- viz, the student as expert, the tutor as facilitator.) These were modern sixth formers with stories to tell - what could be more exciting than that?

Time for lunch - and some illuminating conversations with staff about family story telling (now replaced by soaps?) student magazines, the impoverishing requirement to 'maximise' the outcomes of every second of a college day, good and bad Exam Boards, how good the WJEC is, football poets, life in Shropshire - the forgotten county - and the fact that my 1460 AD hotel was supposed to be haunted (it wasn't). And the chance to answer that resounding repeat ring-tone call I'd kept having to apologise for like a naughty student for disturbing the class with all day! (My daughter's revenge for the distress call I made to her which was broadcast onstage on loudspeaker live to the Brighton Comedy Club - and mine for the times this happened when I was a teacher.) The students were very nice about it.

The afternoon session gave this studious and dedicated group a chance to do the talking via my stage and film script Margot's Guinevere. The bad Dad - good/bad daughter dialogue between the heroine and her councillor-father produced some resonant performances - and the two students who performed it entire (and more or less unrehearsed) for the group brought it to life splendidly. I then went through the classic BBC criteria for dialogue, character, variety and humour and some of my own thoughts on monologue, changes of pace, stichomythia, action. 'Write about what you know and if you don't know find out' about sums up my starting point and the adult-teenager dialogues that the students began to write looked very promising indeed. There were funny ones about teenagers borrowing Mum's car and sneaking it back believing they'd got away with it, disarming 'surprise' dialogues where teen and rent actually liked and respected - instead of killed and harangued - each other and some very moving as well as very funny ones about timeless generation gap 'problems' newly experienced and newly imagined. I can see them up on stage and screen already.

This was in many ways a model day. The increasingly official and curriculum cited role of a writer in school is sometimes misunderstood as a kind of glorified masterclass, doing an OFSTED outstanding version of what the teacher would do if only there were world enough and time (and energy.) But no visitor can have the sort of knowledge of a group the usual teacher has and anyway why pay someone a consultant fee to do something the teacher can do themselves? Better and cheaper to come off timetable for a day and do something 'in house' if that's all you are after. A visiting writer is an expert in a certain field and should be employed to explore and guide in areas the teacher really cannot, in this case the skills and experience of a professional writer. Clare Hodgson, saving her blushes - and the rotating team who observed - or rather participated in - the workshop all day, managed all this brilliantly.

My only regret was that I had to leave the college, students, and this historic but (to me) very happening and 'now' Tudor town on the Cadfael border, after only one day. As well as two mighty mediaeval church towers outside either latticed window, there must have been ten places a pen's throw from the hotel where a writer could eat like a King (or an Empress Maud) and I had the best biryani I've had since India. And the best full English next morning since ....the Angevin Empire. 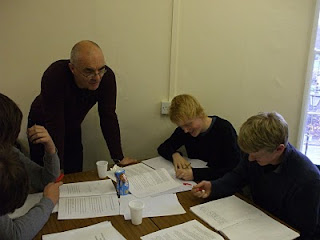 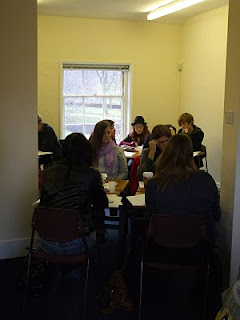 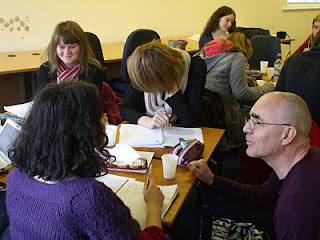 Thank you Shrewsbury. Thank you Shrewsbury Sixth Form College (even if, as the Priory Grammar School, Chris Woodhead once disgraced your progressive portals.) Thank you English department for your hospitality and appreciation. Thank you Miss - even your hurried sketch map along the mighty Severn to the Station at the end of the day was effective. Thank you Shropshire lads and lasses, scholars and scribes.

And don't forget to send me what you've written!
Posted by Gareth Calway at 7:39 am