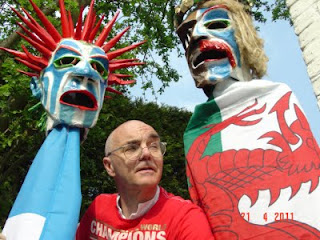 The show is Bardic storytelling with one man theatre, poetry, some posing with a toy sword and shield and a bit of Celtic drumming/ folky vocals. The invisible sword Excalibur - 'blade of lightning' - appears as does the invisible magical white stallion Hengroen on which Arthur rode to battle. It might look more like the groin of a chap in cricket whites stretched over a wheelchair to you but after all we're in Cervantes Don Quixote territory here. Bring your imagination because this is where most of this romance and Celtic legend is staged.
Posted by Gareth Calway at 3:57 pm