Read my full page Lynn News feature on why St Edmund (as in Bury St Edmunds and Hunstanton St Edmund) should be England's patron saint. 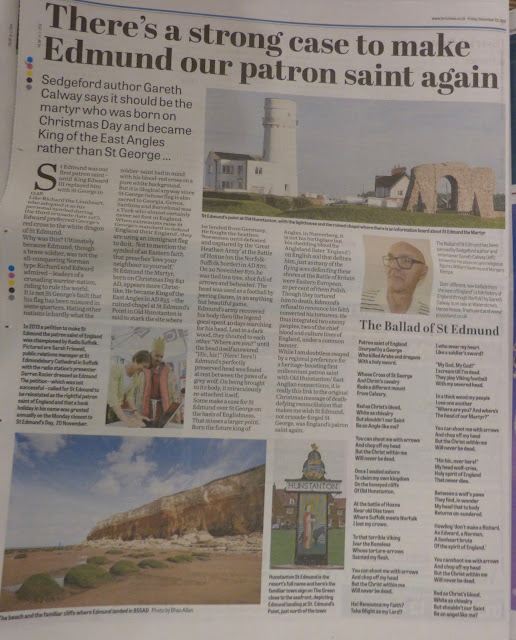 St Edmund was our first patron saint. King Edward III replaced him with St George in 1348. Like Richard the Lionheart, who adopted it as his personal symbol during the third crusade (late 12C), Edward preferred George's red cross to the white dragon of St Edmund.

Why was this? Ultimately because Edmund, though a brave soldier, was not the all-conquering Norman type Richard and Edward admired: leaders of a crusading warrior-nation, riding to rule the world.

It is not St George's fault that his flag has been misused in some quarters. Hating other nations is hardly what the soldier-saint had in mind with his blood-red cross on a pure white background.

But it is illogical anyway since St George (whose flag is also sacred to Georgia, Genoa, Sardinia and Barcelona) was a Turk who almost certainly never set foot in England. When extremists raise St George's standard to defend 'England their England,' they are using an immigrant flag to do it.  Not to mention the symbol of an Eastern faith that preaches 'love your neighbour as yourself.'

St Edmund the Martyr, born on Christmas Day 841 AD, appears more Christ-like. He became King of the East Angles in AD 855 - the ruined chapel at St Edmund's Point in Old Hunstanton is said to mark the site where he landed from Germany. He fought the heathen Norsemen until defeated and captured by the 'Great Heathen Army' at the Battle of Hoxne (on the Norfolk-Suffolk border) in AD 870.

On 20 November 870, he was tied to a tree, shot full of arrows and beheaded. The head was used as a football by jeering Danes, in an anything but beautiful game.

Edmund's army recovered his body then (the legend goes) spent 40 days searching for his head. Lost in a dark wood, they shouted to each other "Where are you?" until the head itself answered "Hic, hic!" (Here! here!)

Edmund's perfectly preserved head was found at rest between the paws of a grey wolf. On being brought to its body, it miraculously re-attached itself.

Some make a case for St Edmund over St George on the basis of Englishness. That misses a larger point. Born the future king of Angles, in Nuremberg, it is not his birthplace but his shedding blood for Angleland (later 'England') on English soil that defines him, just as many of the flying aces defending these shores at the Battle of Britain were Eastern European, 10% of them Poles.

Though they tortured him to death, Edmund's refusal to renounce his faith converted his torturers. He thus integrated two enemy peoples, two of the chief blood and culture lines of England, under a common banner.

While I am doubtless swayed by a regional preference for a heritage-boosting first millennium patron saint with Old Hunstanton/ East Anglian connections,  it is really this link to the original Christmas message of death-defying reconciliation that makes me wish St Edmund, not crusade-forged St George, was England's patron saint again.

The Ballad of St Edmund, Patron St. Of England (until 1348.)
The historical argument
The religious argument

Patron saint of England
Usurped by a George
Who killed Arabs and dragons
With a holy sword.

Whose Cross of St George
And Christ's cavalry
Rode a different mount
From Calvary,

Red as Christ's blood,
White as chivalry
But shouldn't our Saint
Be an Angle like me?

Once I waded ashore
To claim my own kingdom
On the honeyed cliffs
Of Old Hunstanton.

To that terrible Viking
Ivar the Boneless
Whose torture-arrows
Sainted my flesh.

Ha! Renounce my Faith?
Take Might as my Lord?
I who wear my heart
Like a soldier's sword?

"My God, My God!"
I scream till I'm dead.
They play Viking football
With my severed head.

In a thick wood my people
Lose one another
"Where are you? And where's
The head of our Martyr?"

Between a wolf's paws
They find, in wonder
My head that to body
Returns un-sundered.

Howling 'don't make a Richard,
An Edward, a Norman,
A lionheart brute
Of the spirit of England.'

Red as Christ's blood,
White as chivalry
But shouldn't our Saint
Be an angel like me? 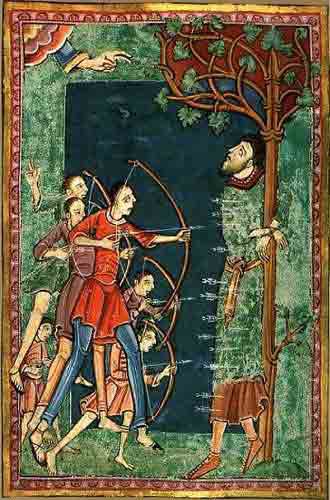 And also its brother double page feature in the EDP on St Felix (as in Felixtowe, Babingley, Dunwich, Gt Ryburgh...)

The print edition (23 Dec) of the Lynn News includes the Ballad of St Edmund and other pictures.
Posted by Gareth Calway at 2:16 pm