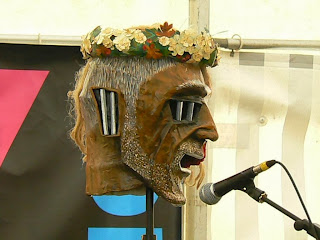 Cromwell’s Talking Head, a dramatic monologue by Gareth Calway. Lively rehearsed reading in the horrible history genre aimed at the naughty kid in all of us. But it's all true - Cromwell the king-killer really was dug up from his 'royal' grave at the Restoration and his head stuck on a traitor's pole for 25 years. Cromwell’s severed head tells his ghastly story of civil war and regicide to a modern grave robber. You’ll laugh your head off! 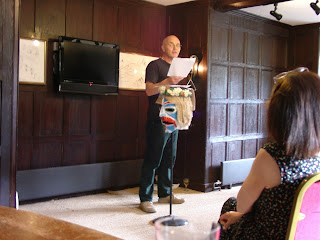 Lovely audience for this today, nodding at all the references and groaning at all the groaners, best OCH gig ever for me. Tracey and team supportive and full of positive vibes as always. A great start to Oliver's charge through two cities and two Norfolk villages. Tally hooo. (NB picture is from last September's gig, as sunshine and short sleeves suggest.)

Cromwell’s Talking Head plus, a dramatic monologue by Gareth Calway. Cromwell’s horrible history told by his severed head! Includes a bonus talk on the Siege of Lynn, 1643. Two gigs: 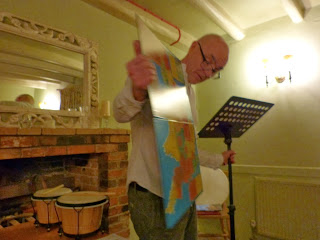 At the 'Room at the Gin' which gives the company its name and the first ever Siege of Lynn talk, a contrast to the second half's horrible history of the talking head. Engaged, appreciative - and again mostly new - audience: one group hurrying in from their fish and chips and another needing Cromwell done by 9 so they could have theirs - it all makes this home venue, and attractive little room - unique. 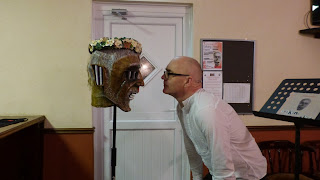 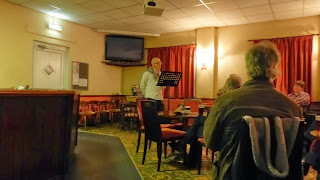 Filled the 'Folkpot' room at Great Massingham with the artistic and intellectual flower of West Norfolk (3 pictured of 23 present). Expert questions after the talk - a real debate with real people engaged with the issues - in a fun atmosphere and lots of naughty kid laughter during the monologue. A splendid time had by all and a small party to follow - not bad for a cold Monday night in February!

New territory - in the  history-burdened bowels of the big city among ye guild of dedicated storytellers and with Cromwell comically at odds with the set theme of the evening - dragon tales (from all cultures, Nordic, Japanese, Beowulf etc) - but you could hear a pun drop in the silence. I sportingly contributed an impassioned Worm to the first half -  dramatic verse done as one man theatre is not quite storytelling either.  Had some generous feedback though. 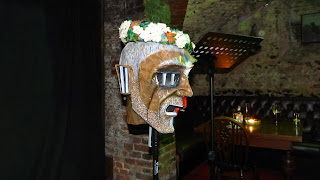 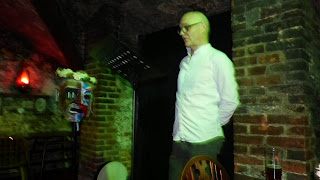 
What did happen to Oliver Cromwell’s body?

This January, Oliver Cromwell House will be the place to learn about what really happened to the former Lord Protector’s beheaded corpse.

‘Cromwell’s Talking Head’ on Thursday 30 January at 2pm, visitors to the tourist venue will be taken on a guided tour of the House followed by a dramatic monologue from Norfolk author Gareth Calway.

Gareth will explain how the body was buried in the manner of a king only to be exhumed after the Restoaration to be hung, drawn and quartered with the head put on the traitor’s pole over Westminister Hall for 25 years.

The mystery of what happened next is then told in vivd detail as Cromwell’s remains were hidden in various locations, presented at freaks shows and became the source of a terrible curse before finally being laid to rest at Sideny Sussex College in Cambridge.

Tracey Harding, Team Leader Tourism and Town Centre Services at East Cambridgeshire District Council, said: “It is wonderful to have Gareth Calway come back to tell his fascinating monologue of what happened to Oliver Cromwell’s corpse after it was exhumed during the reign of Charles II. What adds to the colour of the talk is knowing it is all based as far as possible on historical fact – it reminds us all that we have much to learn from the behaviour of our ancestors.”

Tickets are priced at £7.50 includes which includes a glass of Cromwell cider. For more information call 01353 662062 or visit www.visitely.org.uk.

For further information contact Tony Taylorson in the Communications Team on 01223 699285.

'Cromwell's Talking Head' is a lively rehearsed reading of 25 minutes, with a bit of Celtic drum. It was the first ever spoken word hosted by Ely Folk Festival last August (picture attached), officially judged as 'wonderful' and went down well in a hot marquee to eighty plus people.

It is in the horrible history genre and aimed at the naughty kid in all of us. But it's all true - Cromwell the king-killer really was dug up from his 'royal' grave at the Restoration, hung, drawn, quartered and his head stuck on a traitor's pole for 25 years. After centuries of adventures in freaks shows and dodgy museums, bits nicked by trophy hunters, and carrying a legendary curse, the head was authenticated by cranial detectives and in 1960 secretly buried at his old college in Cambridge University. Secretly in case drunken royalist students dig him up again! In the monologue, the head tells the ghastly story and the story of the Civil War to a young grave robber who has dug up more than he bargained for. It's funny, informative and not that comfortable for royal ears. You’ll laugh your head off!

As Head of State, Oliver, emulating his Tudor ancestor Thomas, oversaw an English Revolution centuries ahead of his time and raised English prestige abroad to its highest level between Agincourt and Trafalgar (400 years). Yet within three years of ‘royal’ burial, he was disgraced and spat upon. Only in Victorian times was there a national revival of respect/campaign for a statue outside the Parliament he did so much to advance. (Queen Victoria refused assent.) Gareth’s monologue has been described as "A triumph of narration and vocal colour" (Radio drama reviews) and as an "Interesting and lively new take on Cromwell" (Cromwell House) Surprising facts about Oliver – like his tolerance – will emerge. Cromwell’s Talking Head has a twice-yearly residency at Oliver Cromwell’s house marking Oliver’s posthumous execution (Jan 30) and ‘lucky day’ (Sep 3.)

An exciting partnership with ex-Mayor of Lynn and now deputy lord lieutenant of Norfolk Dr Paul Richards (author of the documentary history of King’s Lynn) is planned for next September 3 at Marriott’s Warehouse. This partnership will combine Calway’s monologue with some context from Dr Richards about Cromwell’s securing of King’s Lynn for the Parliamentary cause in 1643, against the intrigues of Thomas Gurlyn, Dr Richards’ mayoral predecessor – and a covert royalist - at that time. Meanwhile, at Ringstead and Massingham, Cromwell’s Talking Head is preceded by the author’s own talk on The Siege of Lynn 1643.

http://www.edp24.co.uk/norfolk-life/norfolk-history/17_jurnet_s_house_1_214362 Fascinating history of this house. Owned by Jews until the latter's expulsion from England for 400 years until - yes - Cromwell welcomed them back. Later owned by the famous Pastons. Dripping with history and atmosphere.

Posted by Gareth Calway at 7:50 am

We very much enjoyed your gig at the OCH on Thursday - a unique and very compelling piece, very professionally presented, with drama and humour in equal measure - and it certainly kept the attention of the audience!

Loved it! Always do (love Room at the Gin gigs)...and so did everyone else, judging by the chatting in the interval... Posy Maynard

I thought Gareth had great presence and wit along with a good idea and well-researched content. I really enjoyed his show and I think it has legs if he can find occasions and venues for performances.

As someone who has come to an interest in history later on in my life (due to appalling teaching of the subject at school) I reckon that had I seen Gareth's performance about Oliver Cromwell's head aged 11 it could have made all the difference to my enthusiasm for history. Engaging and humorous. Great stuff!

I really enjoyed the wordplay. Great fun and great comic timing on your part.