Ghostly Legacy of a Queen

When I asked Norwich composer Tom Conway to set these lines from my Ballad of Anne Boleyn and the Burglar it seemed to strike a chord with our audiences. Actress Joanna Swan – Tom’s musical partner in the Familiars folk duo– made it one of the highlights of our ‘spooky folk’ tour of Norfolk. 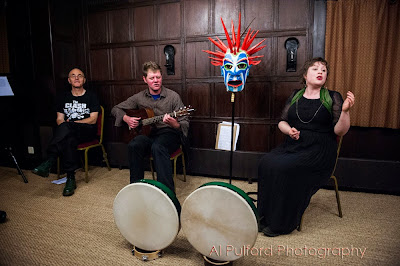 Blickling Hall is certainly a good place to set a ghost story. It was voted the most haunted house in Britain in a National Trust survey in October 2007.

Tonight is the 478th anniversary of Anne Boleyn’s execution and her spirit has good cause to be restless. Her failure to provide a male heir for the Tudor dynasty convinced Henry VIII his marriage was cursed by God.

Her miscarriages, defective births, alleged extra finger and a prominent neck mole didn’t help, encouraging the myth that she was a 'she-devil'. The famous sexual magnetism of her then-unfashionable dark looks and small frame contributed further to her occult mystique. Less famously, but more significantly, her advanced and well-read Protestantism fanned the flames of anathema.

She could not be placed at any of the scenes of the ‘crime’ with any of the six ‘adulterers’ accused, including her brother Lord Rochford and the famous poet Sir Thomas Wyatt (the only one released.) But the witch-hunter’s accusations that she could materialise anywhere, anytime, rather hampered her defence!

At her trial for treason, presided over by her uncle, the Duke of Norfolk, she was accused of acting the 'libertine' before her marriage to Henry, and of being a disciple of Satan who had 'bewitched' (seduced) Henry with sorcery.

During her imprisonment at the Tower in May 1536 - in the very state rooms she had spent her happy coronation – this ‘witch’ enquired anxiously about her father, also her 'sweet broder' and lamented that her mother would die of 'sorrow' for her.

The Boleyn family was living a nightmare, their fairy castle of achieved ambition swept away in one spring-tide of trauma.
It had taken Anne’s father Sir Thomas Boleyn a lifetime to build.

Well established as a diplomat and linguist at the Royal Court before Henry became King in 1509, his calculated marriage to the well-connected royally-descended Howards, Catholic dukes of Norfolk, aided his upward drive.

Thomas’s three children, George, Mary and Anne, were all well-educated and part of his grand plan to attain ever greater power and status.

The girls spent their teenage years in France as ladies-in-waiting to Henry's sister the French Queen, then consecutively joined Queen Katherine of Aragon’s household, as maids of honour. Both caught the King’s eye.

Anne played harder to get and her family benefited from her perceived ‘consort in waiting’ status. Thomas was created Earl of Wiltshire and her brother Lord George Rochford appointed to the Royal Privy Chamber.

Henry secretly wed Anne on 25th of January, 1533, and secured the Boleyns' status as one of England’s pivotal families, in an England that under Henry VIII was really going places. It was said she was the only woman who ever dared answer Henry back – his later wives were expressly required to be 'untroublesome'.

There was probably more head than heart in Anne’s requiting Henry’s troth. Her initial betrothal to Lord Henry Percy had been callously terminated by Cardinal Wolsey (on the King’s orders) and she had inspired Sir Thomas Wyatt’s aching love long before Henry’s.

On Monday 15 May, 1536, her uncle the Duke of Norfolk proclaimed the death sentence on Anne with 'tears in his eyes'.
On Friday 19 May, 1536 at 8.00am, aged 29, she took her place on a scaffold - her brother and the other ‘adulterers’ had already died on theirs, horribly - dressed in a robe of black damask covered by an ermine mantle of white.

Instead of denying her guilt as an adulteress and disciple of witchcraft, she delivered a generous speech praising her former lord and lover Henry VIII. After being blindfolded, a French swordsman severed her head from her delicate neck.

The story goes that on May 19 every year, a carriage pulled by six headless horses with a headless coachman carries a headless Anne to the door of Blickling Hall and the former Queen gets out brandishing her severed head! She then roams the hall’s corridors until daybreak when she disappears.

Perhaps she meets her father’s ghost. Sir Thomas had – inexplicably - continued to work closely with Henry, his children's treacherous killer and true source of his family’s new infamy. After his wife died in 1537, a year after Anne's death, he passed away himself (in 1539.) Elizabeth, Anne's mother, had reportedly died from a broken heart.

Mary – distanced from Anne by the latter’s replacing her in Henry’s affections - died in 1542 but was survived by a young daughter and the rumoured illegitimate son of Henry.

Legend has it that, as penance for the untimely deaths of two of his children, Sir Thomas’s ghost must cross 12 bridges before cockcrow every 19th May. With his own coach of headless horses, he starts at Blickling and crosses bridges at Aylsham, Belaugh, Burg, Buxton, Coltishall, Hautbois, Meyton, Oxnead and Wroxham.

It’s not all legend. The original manor house in Blickling (the surviving red-bricked Hall is Jacobean) was the Boleyn family home and it is reasonable to assume that in 1507 Anne was born there.

The family was deeply rooted locally. The earliest evidence that the Rev. Canon W. L. E. Parsons, Rector of Salle (“Some Notes on the Boleyn Family” published in the Norfolk and Norwich Archaeological Society’s journal in 1935) could find was a John Boleyn mentioned in 1283 in the Register of Walsingham Abbey. There is a record of the Prior of Walsingham suing William Boleyn of Thurning, and Prior’s Bailiff in Salle, for an account and a John Boleyn acting as a surety.

The family status was not all Thomas-won and Tudor-riche. “The descendants of Nicholas Boleyn,” notes Parsons, “weren’t just holders of land under the Lord, they owned the manor of Calthorpe as of fee and right.”

A Geoffrey Boleyn was laid to rest in Salle Church in 1440. His children included Cecily, buried at Blickling; Thomas, a priest and Master of Gonville Hall, Cambridge, from 1454-72 and Geoffrey, a Lord Mayor of London.

It was this second Geoffrey who brought the family to financial and social prominence in the reign of Henry VI. As the protégé of his Norfolk neighbour, the famous Sir John Falstaff (grossly caricatured by Shakespeare) he travelled to London, achieving fame, fortune and royal favour, married into the nobility, and served as Sheriff of London.

Falstaff sold Blickling manor to Geoffrey before dying at Caister Castle in 1459. Geoffrey’s son William served as Sheriff of Norfolk from 1500 to 1501. He was buried in Norwich Cathedral on his death in 1505.

Honours were heaped upon him in the 1520s: first Treasurer of the Household, then Knight of the Garter, Viscount Rochford, and finally, in 1529, the Earldom of Wiltshire. In 1533, when his daughter Anne Boleyn became Queen, the Boleyns had reached the top.

Their fall was as spectacular - and much more swift. Within eight years, not one member of the immediate Boleyn household survived. The remaining relatives, stigmatised by tragedy and shame, disappeared, reportedly to Ireland.

Their curse continued. Even the Howards were infected – Anne’s cousin Catherine Howard later mirroring her own fate. After Sir Thomas’s death in 1539, Blickling passed through his brother’s hand to his relatives, the impressively wealthy Cleres. Yet Sir Edward Clere died a bankrupt in 1605 and eleven years later his widow sold the whole Estate.

Blickling Hall today is one of Norfolk's top visitor attractions, boasting nearly 5000 acres, that impressive Jacobean build, gardens and parkland walking. The landscape, with its hedges, tree-lined lanes, woodlands and red brick manor reaches back to a Tudor-founded England, despite the top secret work carried out by the RAF during the Second World War. A great place to root yourself.

Watch out for the ghosts though!

Gareth’s play Tom and Harry, about the men in Anne Boleyn’s life, and set at Blickling Hall, toured as a Room at the Gin production last year. Hear excerpts here 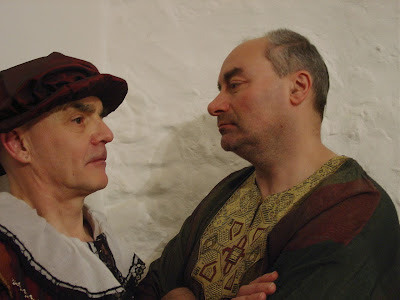