I Am The Green Man!

Would a "Prof. Winter" please contact this office with regards to a cloak; long, black and found after the riotous festivities of The Elsing Free The Green Man May Festival. It seems to be in a slightly disheveled state and appears to have been trampled underfoot and stained with green footprints. This office is not held liable for any cleaning / repairs costs henceforward incurred by the owner of said cloak. 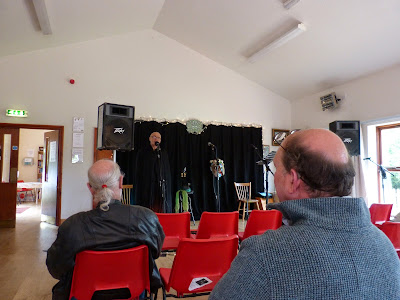 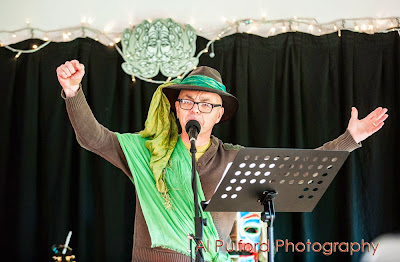 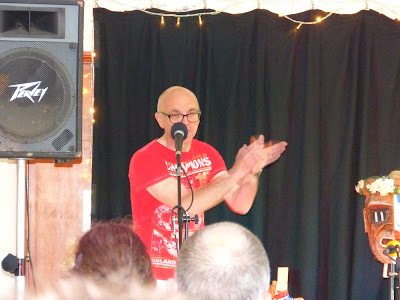 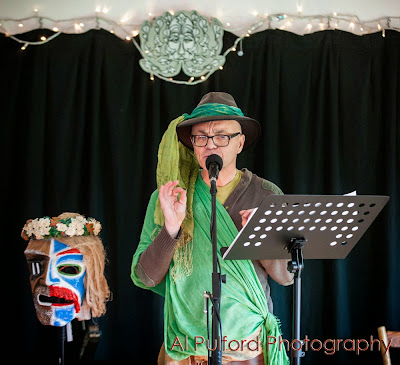 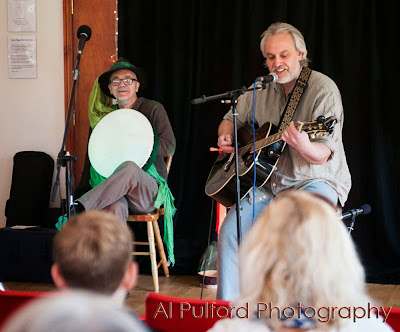 The May Thunderer (Beating the Drum for Tim's Green Man)


Well done for Tim Chipping for organising this all day Free The Green Man Festival celebration of 'England, oh England, this green and pleasant land' (as Morra puts it) in all its folky facets. The running order (I copy Tim's descriptions below) gives an idea of the riches on offer. About half way between my two spots, the glow of bringing the May to a warm and gradually building audience at 2 pm beginning to morph into pre-performance jitters of the second spot at 7 pm, I went for a walk down Church Lane out of the village, still dressed as a leaf, to make sure I had my poem sequence' The Green Man' by heart. The sun was shining its hardest of the day and the general floralia was that brilliant apple green that England borrows from Eden or faery - if it can get through the clouds - at this time of year. A field of lambs was enjoying the magical summer-strength warmth and brightness. Later when I mentioned fairyland in my intro, a baby joined in joyously and when we left, with Long Shore Drift Tim's distinctive folk-voice ringing in our ears, there was a new moon like an angel's smile in the twilight. Not the first time, I feel (to quote Leonard Cohen) 'God is alive, magic is afoot' in Elsing. In this case, manifesting as Beltane, the god of May and The Green Man freed.

2.00 – 2.15pm Bringing In The May – Gareth Calway – Norfolk’s unique
poet performer heralds in May time. 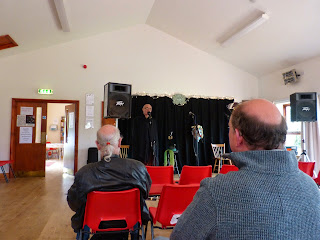 I'm kissing the faceless dead ground
On the breast of a Norfolk rise,
Embracing the chill winter grass
With all my body, with all my heart,
And into my mind steps a beautiful maiden
The spirit of some lost Celtic summer
Touching my skin.
Imagine a rowan, her May leaves wet,
Kissing your shoulder with late spring rain,
Imagine your mind like a moistened bud
Drinking her sweetness. Imagine her leaves
Turned light side up with the weight of her berries
August-heavy in the full milk moon.
Imagine her berries
Spilling their juices like healing oils
Over your November loneliness.
Imagine the mother you never had.
That's how the Queen of the May loves you…

Celebrating the coming of May is an ancient tradition, the threads of which can be traced back to the ancient Celtic festival of Beltane, onwards through the Roman festival of Floralia, was marked by the Anglo Saxon Tri-Milchi, three milkings, as the time of year when winter relinquished its grip and the first days of summer promised more productive months ahead…In more modern times, we have lost our connection with the seasons and the rhythms of the year; lost sight of May Day as an important annual festival marking the end of the dark days of winter. No more! (throw off the cloak) 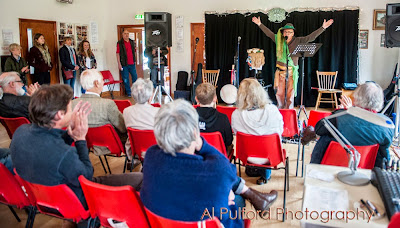 We reclaim May Day for the people, when the spirit of summer, rebirth and growth, embodied in the symbol of the Green Man, is set free and the advent of summer is celebrated with music, dancing and merriment. Free the Green Man!

England awake!
The time is past for slumber.
An ancient memory is calling once again.
Year upon year, back to the dawning
When bright flame was kindled – Beltane.

Summer is a-coming
And Jack i’ the greenwood is stirring.
Seeds burst forth at his very tread, from the leaf loam of his passing
Insistent blades of unstoppable green force
Dew drenched in the bright morning.

Puckered,
Helpless,
Grizzled,
Clenched
Ugly as a newborn face;
Scared to let myself go:
And where do I go
Except towards death?
And what if I grow
In the wrong directions,
Abnormal or twisted,
And how do you do it anyway?
Thoughts crumpled,
Feelings crushed.
Perhaps I’m not even a leaf?
Just scared to stand out
From the crowded branches?
So what am I? – yellow?
Or just painfully shy
Soft virgin green
Closed against the urging sun?
Do I have to do anything?
Will I just become – me?
Or do I have to force myself out?
Safer to sit tight;
But then I get scared
The rest of the branch
Which had seemed
So wooden
Is unfolding faster;
Best to let go then;
But what if my flower
Hardly out of bud
Gets pollinated?

The May blossom light
Of the still warm evening;
The birdsong high
Above distant traffic:
God become mild
And expansive, beaming:
The breathless wind:
All give their answer:
She who saves her dances
Will never be a dancer.

The vigour of vegetation
The wiliness of the worm, out of its depth,
The flowing finesse of a fish
Out of water, beating its scales
Into hard-won wings,
The balance of bird, at height of career,
Still finding its feet;
The power and the glory of the she-tiger
In the cat upon the lap,
Thrust from its napping:
But the growing consciousness that each
Is a drop in the ocean
Compared with the love
That drowns life and death.
Of these
Muse beloved
For you, I sing...


(sing)'Well I dreamed I saw the knights in armour coming
Saying something about a queen.
There were peasants singing and drummers drumming
And the archer split the tree.
There was a fanfare blowing to the sun
That was floating on the breeze...'


Twilight in the greenwood, is Robin Hood awake?
Grey and ghostly shadows are gliding through the brake,
Shadows of the dappled deer, dreaming of the morn,
Dreaming of a hooded man that winds a shadowy horn.

In somer when the shawes be shayne
And leves be large and long,
Hit is ful merry in feyre foreste
To here the foulys song.

Sweet bird, as long as there is Spring,
Once more upon the meadow’s throne you shall sing!
Winter shall pass and you will find your tune.
The roses shall nod and cense you with their bloom.….(Hafiz)

Anyone for Tennys –son?
The Marriage of the King and Queen of May

Far shone the fields of May through open door,
The sacred altar blossomed white with May,
The Sun of May descended on their King,
They gazed on all earth's beauty in their Queen.
They sware at the shrine of May a deathless love:
And Arthur said, "Behold, thy doom is mine.
Let chance what will, I love thee to the death!"
To whom the Queen replied with sparkling eyes,
"King and my lord, I love thee to the death!"
… but when they left the shrine (turn head)
Bleak Winter’s lords before the portal stood,
And cast their frozen scorn upon a city all on fire
With sun and cloth of gold, as trumpets blew,
And Arthur's knighthood sang before the King:--

"Blow trumpet, for the world is white with May;
Blow trumpet, the long night hath rolled away!
Blow through the living world-'Let the King reign.'

"Shall Politicians rule in Arthur's realm?
Let warmth and love and light and living joy
Blow through the living world-'Let the King reign.'

"Blow trumpet! a living flame from death and dust.
Blow trumpet! die the doubt and live the trust!
Blow through the living world-'Let the King reign.'

"The King will follow Light, and we the King
Against the Lord of dark and dying things
Blow through the living world-'Let the King reign.' 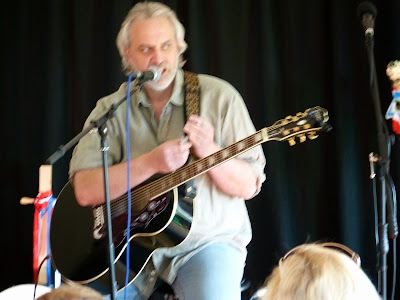 Melanie, Emma, Bob Bones and Tony Rafferty parade The Green Man in the street of Elsing 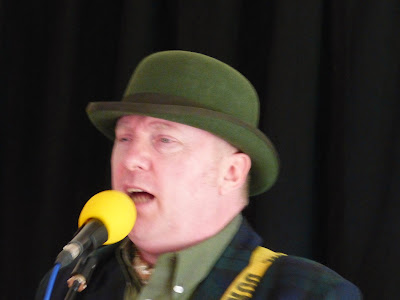 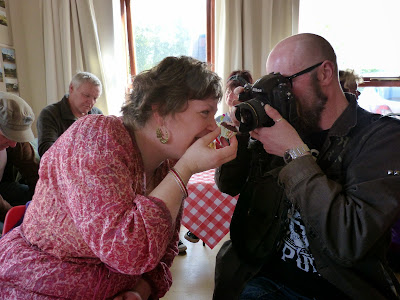 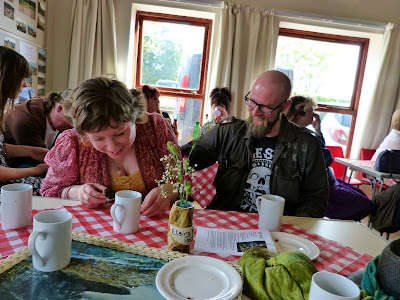 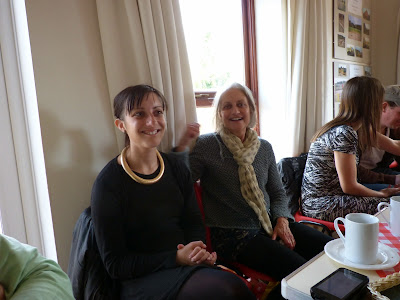 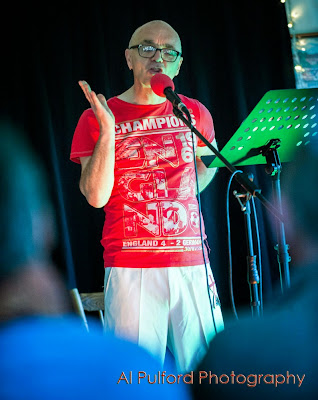 You can read the text of The May King and The Green Man yourself here: It was followed by Dear God Elp Us To Feel Ashamed Of Our Bodies, Life Is A Bitch (But The Songs Are Great); My Daughter Loves Thierry Henry; Gran and Look I Have Come Through (Gressenhall at Lambing Time 1993)

We very much enjoyed listening to Gareth's poetry and several struck a chord with Doug, not least taking your daughter to the football match