DIGGING SEDGEFORD, AN ACCOUNT OF SHARP'S FIRST 19 YEARS BY THE DIGGERS' COLLECTIVE , IS PUBLISHED TODAY AND LAUNCHED AT SEDGEFORD CHURCH ON FRIDAY AUGUST 29.

I review it here 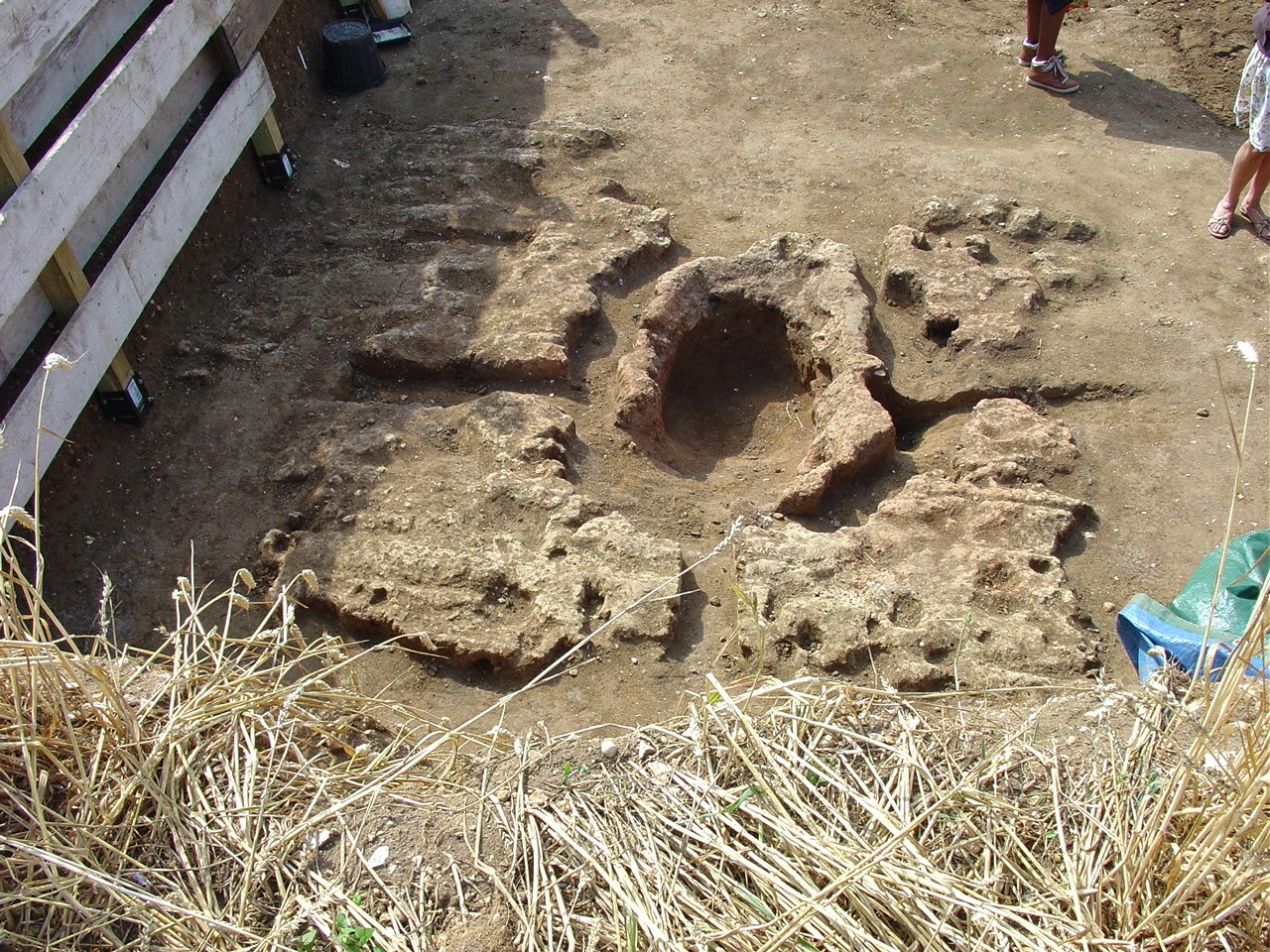 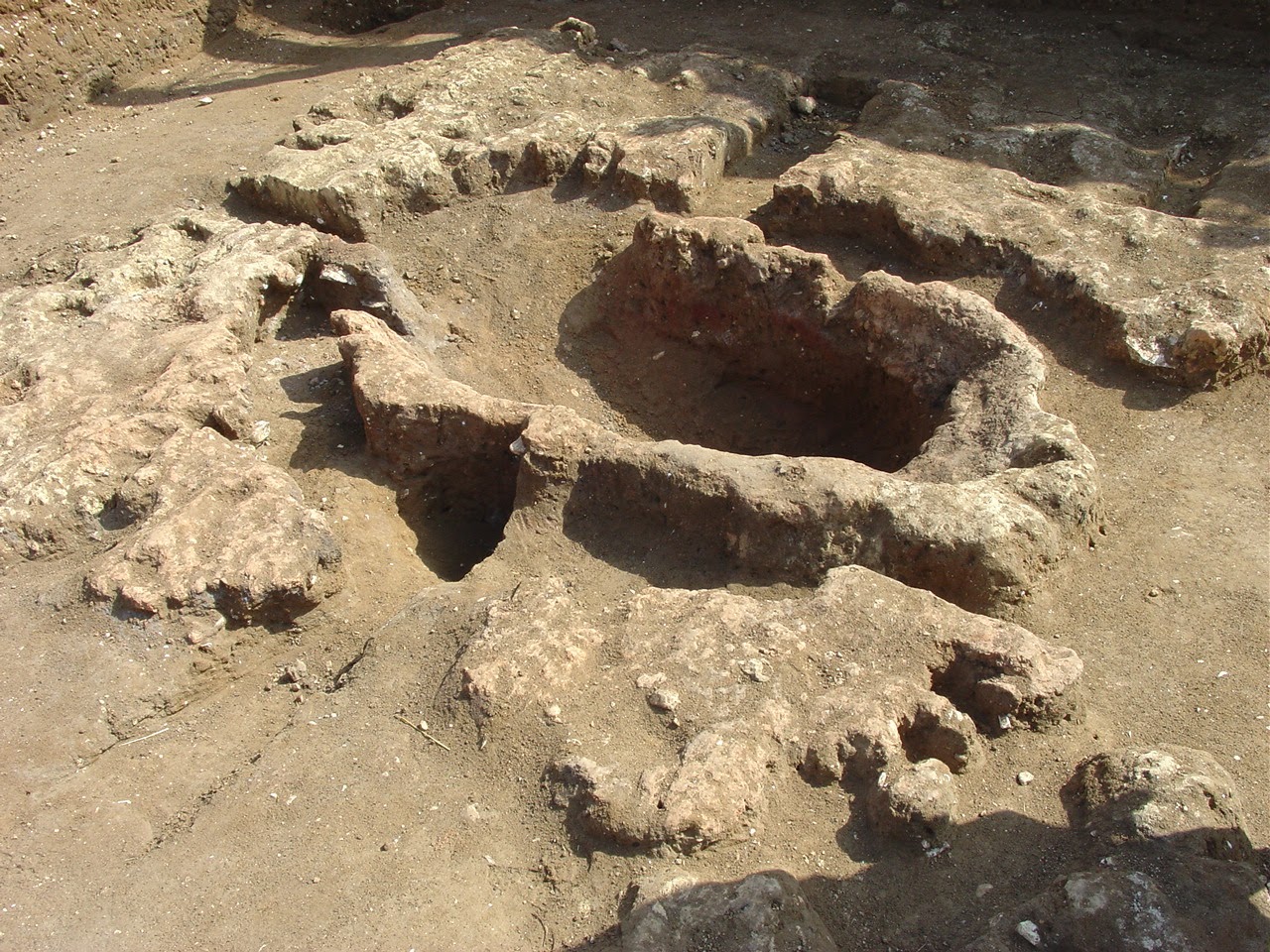 As I write, a mechanical digger is making a big hole in a field. Something like it has been happening here in Sedgeford every July for the past 19 years.  It’s exciting - and has nothing to do with farming or building. That digger is unearthing a thousand years of village stories.


Some are unsolved mysteries. Like why the whole village moved from its ancient north-facing slope to its present south-facing one, at or just before the Norman invasion. 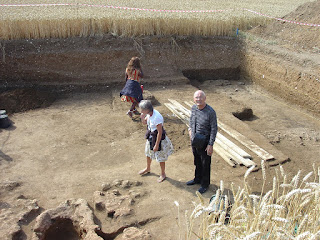 Some are murder stories, part of the timeless ancestral battle for survival and territory. Many of these are buried in the ‘Boneyard’.


This riverside graveyard - SHARP’s original focus – was abandoned in Norman times. But it has been preserved for centuries in old wives’ tales and mother’s threats to naughty children ‘you’ll be sent to the boneyard with the dead folk.’


This ‘Boneyard’ yielded Saxon burial and cremation – and a Viking woman buried with a horse – and a Late Saxon murder scene:  a large healthy male with fatal wounds still etched into the skeleton by a Viking marauder, now an exhibit you can see on the SHARP site all July, as well as a crouch-burial dating from the Bronze Age.


Many of the stories SHARP digs up are ongoing detective stories, presenting clues and evidence for as many theories as there are diggers. Gary Rossin, director of SHARP, laughs that the collective noun for archaeologists is an ‘argument’.


All in a way are ghost stories, haunting our relatively quiet modern Sedgeford with its illustrious, teeming, historically central and thickly populated past. The manor is not listed in Domesday Book for nothing.


Fasten your tardis belts for a quick review of SHARP finds.


Worked flint found in the deserted Boneyard/Reedham area west of the church and south of the modern settlement – locally believed to be haunted – suggests that ancient hunter gatherers set up temporary camp here.


A flint axe – lost or discarded – and other worked flint indicates early farmers at work.


A crouched burial dating from the Early Bronze Age (2458-2200 BC) in the Lower Chalkpit Field and a series of round barrows – burial mounds - in a tight cluster on rising ground.


A second crouched burial thirty metres and an entire Age (two thousand years) distant from the previous one, Iron Age rather than Bronze Age. A hoard – now famous and in Lynn Museum – of 39 gold staters (gold coins) found concealed within a cow’s humerus. In the same area, a horse burial – the ancient preserved huge skeleton a breathtaking sight at the time when seen in neighbour’s garage! No sign of Boudicca… yet.


A definite Roman farmstead, a probable villa and a possible supply plant for Brancaster Roman fort. A cremated body in a grain drying oven!


SHARP’s primary thrust. 300 excavated burials in and around the Boneyard (to add to 70 discovered there in the pre-SHARP 1950s by the archaeologist Dr Peter Jewell). More recently, excavations of the living settlement and last year’s huge find: a large baked clay oven containing quantities of burnt grain, big enough to serve a monastery or an estate and suggesting an industrial-sized operation and settlement here.


The village abandons its north-facing slope and moves down into the valley. A crippled woman of the thegn class is interred with honour in a (hitherto undiscovered) chapel, the holy site oddly abandoned when St Mary’s Church was built. Was she some kind of holy woman? Why was this original holy ground not used for the church?


Coastal defence aerodrome. Ammo boxes used as stairs; a soldier invalided home from is bombed in a field.


The Sedgeford Historical and Archaeological Research Project was established in 1996 as a long term, multi-period, multi-disciplinary research project. It was born out of a chance meeting off the Amalfi coast between founder-director Dr Neil Faulkner, then conducting a tour of Roman archaeological sites, and anthropologist Sedgeford Estate owner Bernard Campbell, whose ploughs frequently unearthed bones.


The idea was to investigate the entire range of human settlement and land use in the parish of Sedgeford. This is a wider focus than usual and in keeping with modern archaeological science – it is not the one-off fascinating find that matters but how many finds build into a picture of how a community lived. It included a popular and inclusive Sedgeford village survey in which domestic gardens got the trench treatment.


This initiative meant that villagers saw for themselves the layers of history they live on: in my own garden- clay pipes from pre-Victorian times, a large intact pottery vessel marked ‘A Beam and Co, Ale and Spirit Merchant, King’s Lynn’ and – much to the diggers’ excitement at the time – a piece of (rare) Early Saxon pottery now expertly annotated by SHARP and displayed in my library.


I was told at the time that this was a more significant find for what it told us about human settlement here than the gold hoard, though the popular imagination does not seem to agree! How the pot got there is definitely a story I will write someday.


The success of the internationally prestigious project from a Norfolk point of view is demonstrated by the fact that over the years half a dozen young local volunteers later went on to study archaeology at University. It still draws local enthusiasts to its annual camp along with regional, national and international enthusiasts, students and scholars.


It brings an air of youth, adventure, academic enquiry and the big outside world to the village. The average age of Sedgeford residents probably halves during July! There are also popular talks, lectures, music and theatre available to everyone.


One of the highlights for this year will be the launch of the first comprehensive book about the SHARP excavations. It concentrates in detail on the first twelve years of fieldwork and summarises provisional result for the last six years.


And now at last, we are going to get the full story (so far). “Digging Sedgeford: A People’s Archaeology” (authored, Dr Faulkner insists, in the same way as the project is run – collectively.)


I asked its publisher Peter Stibbons of Poppyland publishing what insights the book’s analysis of nearly 300 skeletons from that Anglo-Saxon site could give into the lives of Sedgeford's inhabitants of the period. Were they the primitive barbarian settlers we learned about at school, decivilising a post-Roman culture, for example?


“The insights are fascinating.” Mr Stibbons explained, “We can dispense with some commonly accepted ideas. Their spindle whorls, pin-beaters and dress pins help us understand their industry and their clothing. Their love of gold in ornamentation and in coinage is revealed, their delicate combs carved from bone, their grain ovens and castaway bones speak of their food, and glass and beads speak of their appreciation of decoration and taste.”


Indeed, Dr Faulkner’s most recent Annual Open Day talk (last July) ‘Who were the Anglo-Saxons?’ dismissed the view, established by the Venerable Bede in the 8th century - that waves of axe-bearing Angles, Saxons and Jutes ‘invaded’ post-Roman Britain and established a barbarian bridgehead from which eventually all southern Britain became Angle-land.


On the contrary, these early ‘Saxons’ were a relatively democratic band of pioneering comrades-in-arms often actually joined by local Britons looking for leadership and protection in the ‘dark’ times  after Roman withdrawal.


This is ground-breaking stuff, a whole new story. I wonder how much the negative portrayal of ‘Saxons’ as savage invaders was unconsciously conditioned, or encouraged as convenient propaganda, by the threat of invasion from Germany in the twentieth century.


In the centenary of that fateful summer of 1914, this threat itself has now passed into archaeology as SHARP further investigates the coastal defence aerodrome (later a training function) a mile east of Sedgeford. The appallingly long list of war dead on Sedgeford’s War Memorial – a telephone directory of local names – seems to underwrite the seriousness of this work.


I asked Mr Stibbons how specialised ‘Digging Sedgeford’ was – was it mainly for scholars of archaeology? And would it interest anyone outside Sedgeford itself?


“The book presents both the detailed information required by the archaeological community but in such a way as to be of great interest to any with a more general interest in 50 generations of history from a village. Indeed, the members of the SHARP team who have led the writing of the text make the point that it is not simply a unique story of one village but that it can be seen as the story of a 'normal' village, a story which will fit many other settlements.


“It is richly illustrated with photographs, maps and diagrams. With 256 pages and colour throughout, there's a chance to understand human settlement in the county over many decades.


Mr Stibbons concluded.  “It doesn't claim to be a comprehensive account of the whole site and its story but is the opening round of a series of titles which could well stretch for years ahead, should the remarkable SHARP excavations continue for as long as they already have.”


“Digging Sedgeford - A People's Archaeology” is published by Poppyland Publishing and will be in local bookshops from 29th July. It is priced at £19.95; you can see further details or purchase directly from www.poppyland.co.uk You can also link from  the Poppyland Publishing Facebook page.  Details of SHARP courses – from Human Remains to Anglo Saxon Cookery! - are at http://www.sharp.org.uk/courses.html and more general information on the project is on www.sharp.co.uk.

Posted by Gareth Calway at 1:08 pm