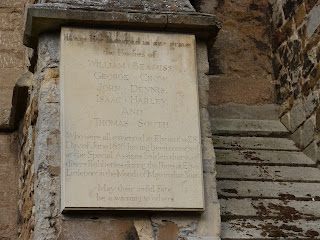 "I might as well be hanged as starved" (Richard Rutter, a rioter at Ely 1816)

(right- plaque on the tower of Ely Church commemorating the five rioters hanged. Note the chilling threat at the end "May their awful fate be a warning to others." It certainly was. East Anglia was subdued throughout the riotous decades which followed.)

"John Dennis of Littleport, aged 42,
For 'Felonious Riot and Burgling'
Fifty Pound Notes from an Ely house,
I sentence you - death by hanging.

William Beamis of Littleport, aged the same,
For 'Felonious Riot and Robbing'
A One Pound Note from a Littleport man,
I sentence you - death by hanging.

Isaac Harley of Littleport, 33,
For Housebreaking, Riot and Stealing
The plate, linen, china of John Vatchel, clerk,
I sentence you - death by hanging."

The 11th hour comes, lads, we won't see a 12th,
Only parson and hangman and darkness,
We're names on a church wall, a cautionary tale,
Of the rigged scales of British Justice.

Thomas South of Littleport, aged 22,
For Riot and Breaking and Burgling
A Littleport drapers and grocery shop,
I sentence you - death by hanging.

George Crow of Littleport, aged 23,
For Riot in Ely and Burgling
Of Cutlacks and Waddlelow's of Littleport,
I sentence you - death by hanging.

The 11th hour comes, lads, we won't see a 12th,
Only parson and hangman and darkness,
We're names on a church wall, a cautionary tale,
Of the skewed scales of British Justice.

The Jury has no doubt, it wants us put
In our place of execution,
A moment to pray, then to suffer the price
Of our faux-French revolution.

On the brink of eternity, five men stand,
Witnesses keenly attending,
We acknowledge our crimes and the justice received
Then a jolt - and five bodies swinging.

"May the awful fate of these unhappy men
Produce the intended effect
Deterring all others from similar crimes
…With an iron heel on your necks."

The 11th hour comes, lads, we won't see a 12th,
Only parson and hangman and darkness,
We're names on a church wall, a cautionary tale,
Of the stacked scales of British Justice.

The 11th hour comes, lads, we won't see a 12th,
Only parson and hangman and darkness,
We're names on a church wall, a cautionary tale,


Of the corrupt scales of British Justice. 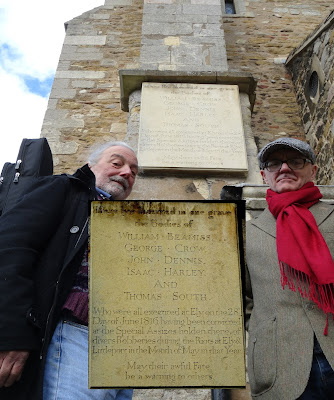 'Bread or Blood' written by Gareth Calway and with music composed by Andy Wall tells the story of the Littleport and Ely Riots, which broke out 200 years ago on  22 May 1816, a year after Waterloo. Many people view post-war Regency England as an ideal time of graceful buildings and refined civilisation but Jane Austen's description in 'Northanger Abbey' of "a mob of three thousand men assembling in St George's Fields; the Bank attacked, the Tower threatened, the streets of London flowing with blood" was not as ironic as may appear. The 'Iron Duke' of Wellington, was not called so because of his military mettle at Waterloo but because he had to have iron shutters erected on his windows afterwards against the threat of mob attacks on his house. Landowners and manufacturers alike went in fear of violent revolution and dukes could not safely walk the streets of London in their ordinary clothes in the almost incredibly dreadful conditions faced by the working population after the Napoleonic wars. It is a sign of how desperate things were that even the normally docile agricultural labourers of East Anglia rose in bread riot in the 'year without a summer' of 1816 - when things got even worse - of which the one at Littleport and Ely became a symbol. And it is a sign of how scared the rich and powerful were that the revenges taken upon a mob of aggravated burglars was so appallingly harsh. 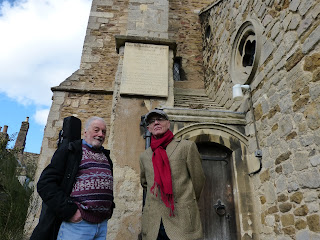 Gareth Calway is an author and performer whose historical works include ‘Bound for Jamaica' (Collins Education, 2012, about the Atlantic slave trade) and 'Doin different, 39 new ballads from the East of England’ (Poppyland, 2015.) He writes regular features for the Eastern Daily Press and other East Anglian journals and his one man show ‘Cromwell’s Talking Head’ brought a ‘wonderful local flavour’ to Ely Folk Festival in 2013.

Andy Wall is a director of the Ely Folk Festival and a veteran of the folk circuit, recently performing in Folkstock's East of England showcase  and a great favourite wherever he performs. 'Bread or Blood' is the first collaboration of Andy and Gareth and both will be appearing separately at this year's Folk in a Field  festival in Norfolk as well as touring 'Bread or Blood' in East Anglia culminating at the Ely Folk Festival in July.

Posted by Gareth Calway at 9:33 am

Echoes of the inspirational passion of Huw Lewis, Gareth! Merthyr riots, Dic Penderyn and "The Iniquity of it All!" are seared into my memory thanks to him.