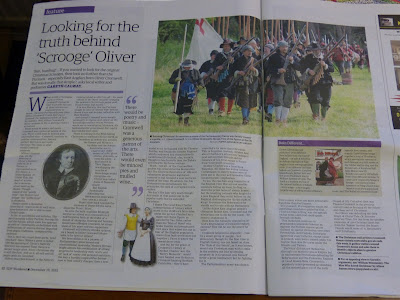 What would a Christmas Party at Oliver Cromwell’s house be like? It sounds like one of those oxymorons the great Puritan epic poet John Milton (Cromwell’s Latin Secretary) favoured – the ‘darkness visible’ of hell for instance. Oliver Cromwell’s House in Ely is inviting visitors to find out.

There would be poetry and music – Cromwell was a generous patron of the arts. There would even be minced pies and mulled wine – Cromwell, contrary to popular misconception, banned neither. But this is not really the issue. The issue is what would Cromwell celebrate.

Milton’s famous Ode ‘ On the Morning of Christ’s Nativity tells us.

In it Nature is represented as an Eve figure, a fallen woman. At Christ Tide, the dead of winter, she is nervous about meeting her Maker. Though naked of her ‘gawdy trim' – her flowers and foliage - her ‘guilty front’ is shameful.

Nature needs a December covering of virgin snow. In such wise, eyes downward, she is able to meet Christ’s gaze.

So far so anti-festive and anti-fun. The party-pooping killjoy Puritan, fearing life and the female, which some less spartan strands of Christianity, embellished with millenniums of solstice festival imported from pagan traditions - comparatively - embrace.

But hold you hard there. Milton’s poem is called ‘ON the morning of Christ’s Nativity.’ Eternity has entered Time; there is a deeper magic afoot. Every Christmas day is still the first. And on it, all evil and all pagan gods are banished.

Milton describes himself at the Nativity running ahead to offer his gift – the poem - ahead of the three ‘wisards’ bringing the newborn Christ their pagan gold, frankincense and myrrh.

It is this Eternity that the Puritans sought to enter at ‘Christ Tide’ behind closed doors and in quiet reflection with their families.

And though Cromwell never sought personally to impose such peace on the wassailing revellers whom Puritans would see as worshipping Mammon, his fundamentalist government did and it has rankled ever since.

There is nothing in the Bible telling Christians to celebrate Christ’s birth on 25 December (Mithras’s birthday and the Roman Saturnalia) nor to observe our chilly season of gifts, ghost stories, gluwein, or even the robin – a bird sacred to Thor. Pagans worshipping the sunrise at Stonehenge would recognise our 'Christ'mas before Jesus of Nazareth would.

But English Protestants defending the Reformation from what they saw as a sneaky Stuart slide back towards the excesses of Rome felt the same about the Stuart ‘Mass'. So even the mild Anglican Midnight service we attend as a concession to a half-forgotten faith in the midst of a month of shopping, feasting and boozing would have offended Cromwell let alone some of his more extreme supporters. 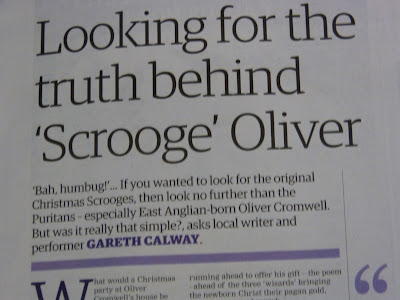 Cromwell bitterly divides opinion. As a board in Oliver Cromwell House asks, is he hero or villain?

His hero status is as a pioneer of Parliamentary government and constitutional monarchy. Modern Britons might admire his combination of strong progressive leadership with ‘warts and all' lack of vanity and personal ambition; the way a humble inspired Fen farmer rose to lead cavalry charges, then a new model army he founded with Sir Thomas Fairfax and finally the Greater England which conquered and constitutionally modernised (in Ireland, alas, brutally though no more brutally than the Tudors and Stuarts) the home nations.

Much – not all - of the Cromwellian project was reversed at the Restoration. But The Glorious Revolution of 1688 and subsequent progressive legislation restored it and revealed a man centuries ahead of his time. We admire too his Protestant non-sectarianism, his principles, the lack of corruption in his regime.

We don’t like him very much though. And much of that comes out in the popular myth that he cancelled Christmas.

I blame The Good King Charles interpretation of history which starts in the children’s fairy tales about the period: Charles I a martyred Christ figure, as painted by Van Dyke, rather than the tyrant and ‘Man of blood’ who broke treaties and perpetuated civil wars that wiped out one in four of the English population (more than both world wars put together). Paint is where the resemblance ends – there is a Miltonic cosmos between Charles’ absolutism and the Sermon on the Mount.

And but for the grace of Cromwell’s victory at Dunbar, Charles’ son, the “Merry Monarch,’ would have handed over Britain to Covenant-bashing Scottish Calvinists – they’d have cancelled a lot more than Christmas. This is forgotten. Instead, children hear about Charles II’s attractively indulgent (and self-centred) lifestyle and the romance of his royal escape to France from ‘Cromwell’s preachies.’

Neither Charles was a Good King Wencelas. All those fun-loving Cavalier Christmases in stately homes were of little use to the poor and homeless Christ inconveniently emphasises.

To me, the real folk song romantics of the English Civil War are not wealthy cavaliers hiding up trees, in drag, or down the priest holes of stately homes but the levelling redcoats who fought for a new England they could believe in. An England challenging the ‘divine right of kings’ to reverse the Reformation by stealth and to rule without Parliament.

Unlike fellow East Anglian people’s champion Robert Kett, Cromwell had the misfortune not to die for the cause – he lived to implement it. How does the romantic reputation of ‘God’s Englishman’ (Cromwell) endure success? How did he use the power he won?

Cromwell believed in oligarchy, not democracy, though for the first time in English history, one not based on class. The Rule of the Saints meant any Protestant man with a stake in the country, not just by owning property in it (Cromwell was himself never a great landowner) but by fighting for it. The Parliamentary army was drawn from a much wider and more democratic franchise than Parliament.

To Cromwell, Protestantism meant the individual conscience guided by God. (‘God not Man is King’ was the epitaph on his tomb.) And God could speak through anybody.

This made him (contrary to propaganda) unusually tolerant as (against the Puritan stereotype) he claimed no special divination over other Protestants. And Catholic historians agree that even Catholics, except (alas) in Ireland, were better treated under his regime than was the norm under the Stuarts and Tudors.

‘Puritans’ did not see themselves through our modern eyes as killjoys but as mainstream Protestants defending the Reformation and the Protestant England of Good Queen Bess. Cromwell is popularly misrepresented as smashing all the stained glass out of the Lady Chapel of Ely Cathedral (that was Thomas Cromwell) and as draining all the colour and cheer out of Christmas.

But Oliver was defending the deep magic of Christ Tide. Of Eternity entering Time. Not just from the heathen paganism of pre-Christian times but from the ‘Roman’ festival the Stuart Church would make of it, the country and Christianity. The Christmas trail at Oliver Cromwell House in Ely visitely.eastcambs.gov.uk runs until twelfth night. It guides visitors around Cromwell’s house and asks them to identify objects alien to genuine Christmas tradition. 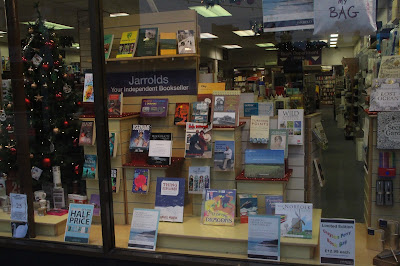 The only gift....There it is, in the Jarrolds' Christmas window.

Gareth Calway has just published ‘Doin different – new ballads from the East of England’ - on sale in bookshops throughout East Anglia or from www.poppyland.co.uk . 'Doin different' includes ballads on Cromwell, Cavaliers, Roundheads, Robert Kett and the proto-Protestant martyr William Sawtrey of Lynn. 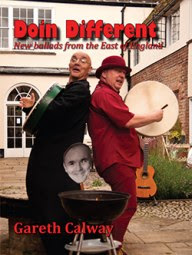 Anto Morra’s new CD ‘Boudicca’s Country’ (12 ballads from ‘Doin different) includes ‘A Lynn Carol’ inspired by Margery Kempe - you can hear it live tomorrow at Fring Church Carol Service or on www.poppyland.co.uk - and ‘The Ballad of Cromwell’s Head’. 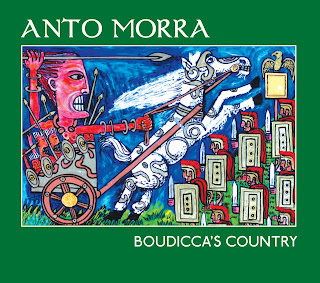 Read Gareth's EDP feature on The Meaning of Christmas: Santa and Saturnalia at the Solstice

For an opposing view see ‘William Winstanley- The Man Who Saved Christmas’ by Alison Barnes (www.poppyland.co.uk)

Posted by Gareth Calway at 8:07 am